Soon after arriving at the University of Florida in 1977, I started receiving certain boid snakes, Burmese pythons (Python molurus bivitattus) and boa constrictors (Boa constrictor), with signs of a neurological disease. It was characterized by the formation of inclusions, unique stainable bodies, in the cytoplasm of a wide variety of cells, including those in the central nervous system and circulating blood cells. Eventually it was named inclusion body disease. Thereafter, IBD was seen in other boa and python species, and the green anaconda (Eunectes murinus). An unconfirmed disease resembling IBD also was diagnosed in an eastern kingsnake (Lampropeltis g. getula) housed with boa constrictors and in palm vipers (Bothriechis marchi). It’s unknown how many snakes die from IBD every year.

This boa constrictor with IBD has skin lesions. Remember, such signs can be indicative of other diseases, too.

Reflecting on my 31 years studying IBD, what is most interesting to me is that in the early years I saw more cases of the disease in Burmese pythons than in boa constrictors, but now it is the opposite. Speculation as to the reason for this change abounds, but because good before-death tests aren’t available for IBD, we do not have the tools to sort out the factors of this puzzle.

Clinical Signs
Although some snakes die within several weeks of showing the first signs of illness, others can remain alive for months or more. For Burmese pythons, the most common signs of IBD are head tilts, abnormalities in body positioning, locomotor abnormalities, “stargazing” and heads arching over bodies. Several pythons also lost muscle tone throughout their entire bodies. In addition to signs of nervous system disease, IBD-affected boa constrictors and other related boas commonly regurgitate food items within several days of eating. Regurgitation was not seen in Burmese pythons. Additional signs seen in affected boas include oral inflammations, pneumonia and various tumors. Remember that the clinical signs seen in snakes with IBD can be quite similar to signs of other snake diseases. Signs alone do not allow someone to make a specific diagnosis. 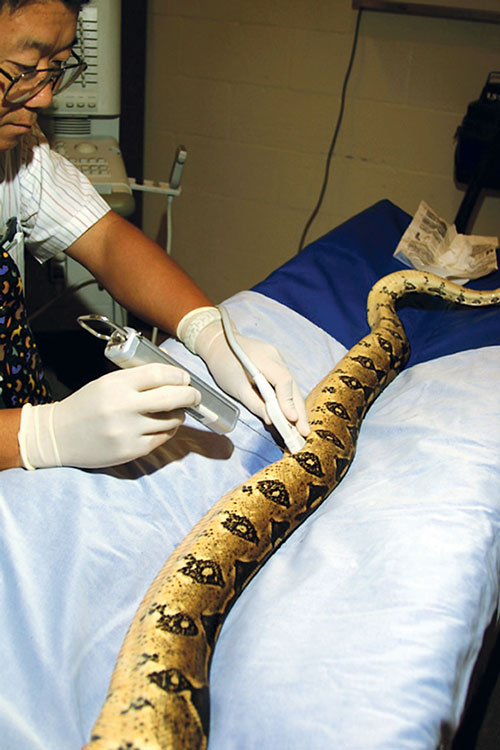 A vet performs a liver biopsy on a boa using ultrasound-guided biopsy methods. Tissue biopsies are one way vets can diagnose whether a snake has IBD.

I know from experience that certain boid snakes can have what we call a “subclinical infection.” In these infections an animal is infected with a pathogen, but it does not manifest clinical signs of illness. Such animals may be very difficult to diagnose, and they may spread the pathogen to other animals. Perhaps there are different disease-causing strains of the causative agent, which may account for differences in the clinical appearance of infected snakes.

Cause and Transmission of Inclusion Body Disease

The specific cause of IBD is not known, but the presence of inclusions in multiple tissues is what is currently used to make a diagnosis. Costs can be a limiting factor in these diagnostics. Depending on the number of tissues submitted, tissue biopsies from living snakes generally can be evaluated for less than $200, but note this doesn’t include the cost of taking the biopsies. Submitting a blood film to a clinical pathologist to determine if inclusions are present is relatively inexpensive, but there are limits on what this test will reveal. Full necropsies on dead snakes may cost $300 to $500 per case.

Although evidence supports a virus in the family Retroviridae, which includes the HIV and FIV viruses, as the causative agent of IBD, the original retrovirus isolated from an IBD-infected snake was lost. In a more recent study, we isolated several retroviruses from boa constrictors with IBD, and these isolates were partially characterized. Still, we do not know whether one is the causative agent of IBD. These isolates need to be fully sequenced, so a molecular-based test that permits testing of the tissues of infected snakes for the presence of the virus can be developed.

Like IBD’s cause, the disease’s exact route of transmission has not been determined, but direct contact is probably involved. The common snake mite (Ophionyssus natricis) has been incriminated as a possible vector. Invariably, mites are present in snake colonies experiencing an IBD outbreak. Thus preventing mites from entering a collection and eliminating them in one are essential tasks. Eliminating mites from a collection is highly dependent upon the collection’s size. It’s also possible the disease’s causative agent is passed on from mother to young in both egg-laying and live-bearing snakes.

There is no easy template to follow to prevent IBD from entering a snake collection, or managing a breeding or pet collection where the disease has been diagnosed. However, several approaches can reduce the risk of IBD entering a collection.

First and foremost, a solid preventative medicine program should be established. No such program is 100 percent effective in all situations, so what we are talking about is risk reduction. Having a veterinarian knowledgeable about reptiles or specializing in reptile medicine is all-important.

Also essential is knowing the collection history of soon-to-be-purchased snakes. This sounds simple, but actually it is not. Uncovering the history of the breeder’s collection is often difficult to impossible. Snakes are bought and sold so easily on the Web and at shows, and new snake breeders start up literally overnight. Plus the vast majority of snakes that die in a collection never undergo a necropsy or thorough work-up. Breeders often don’t provide information on all diseases and pathogens seen in their collections over time. Every collection inevitably has animals that do not do well and die of various problems. No collection is pathogen-free. So buyer beware, and do your best to select animals from well-established, recognized breeders rather than purchasing animals because they are selling for a very good price.

Blood samples are the easiest tissue sample to collect, and films can be checked for the presence of IBD inclusions in cells. If snakekeepers have the financial resources, biopsies can be obtained from a snake’s tonsils, liver and kidneys. This certainly is not practical to do in all situations, but such before-death diagnostics improve the owner’s ability to identify an infected animal. In the end, the cost of such quarantine programs and the use of these diagnostics depend on either the money snakekeepers have to spend or the importance they attach to such preventative medicine programs. You can lead a horse to water, but you sure can’t make it drink.

Finally, obviously ill snakes should never be entered into the established collection. Only well-feeding animals in excellent condition should be added after the quarantine period is over. And make sure none are mite-infested. Many other things can be done within the context of a preventative medicine program, but that topic is for another article to address.