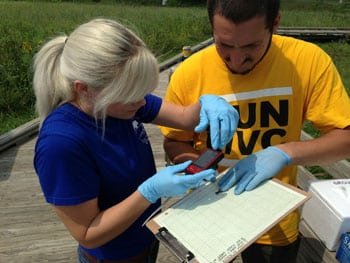 A group of Wichita State University students have discovered that the chytrid fungus Batrachochytrium dendrobatidis is now prevalent in the Wichita area, placing the fungus in the middle of the United States, where it has never been reported, according to a news story on the university's website. The fungus has already been found in the states surrounding Kansas and in many parts of the world. 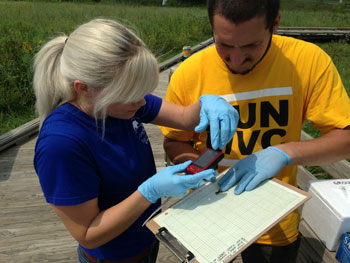 Audrey McTaggart, a WSU vounteer and McPherson College student, and Oliver Keller, WSU graduate student measure one of the frog.

The students conducted their research at WSU field stations near Wichita, Viola and Waterloo, where they captured and tested several frogs and made note of the quality of the water in which the frogs were captured. They also conducted DNA evidence of the frogs.

The first chytrid study conducted in the state occurred in 2007. Five frogs in Johnson County were tested for chytrid, all of which tested negative. No other studies followed until now. The students will now work to publish their findings in Herpetological Review, a peer-reviewed scientific journal for herpetologists and others in the scientific community. The study is based on two years of undergraduate and graduate research as part of a field ecology class.

The chytrid fungus has devastated amphibian populations around the world. The fungus attacks the skin of amphibians, killing them. It was first discovered in 1991 and described in detail in 1998, where it was given the scientific name Batrachochytrium dendrobatidis by scientists Dr. Don Nichols,  Dr. Allan Pessier, and Joyce Longcore, Ph.D. It is speculated that the fungus made its way to the United States via the African clawed frog in the 1930s. Xenopus laevis is resistant to the fungus, as is the North American bullfrog (Rana catesbeiana), which scientists believe helped to spread the fungus around the world by way of the frog leg, biological supply, and bait and water gardening markets.