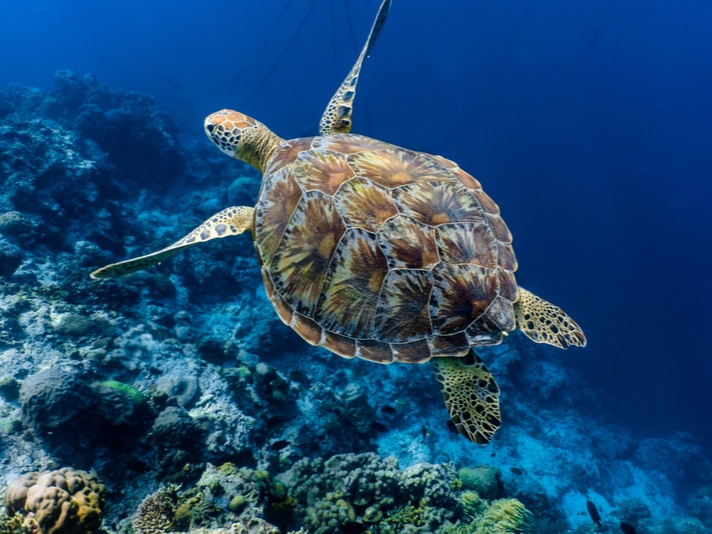 A 2018 study found that micro plastics and what is now called marine plastics have been found in all seven marine turtle species. That study looked at

A 2018 study found that micro plastics and what is now called marine plastics have been found in all seven marine turtle species. That study looked at both stranded and bycaught marine reptiles in both the Atlantic and Pacific Ocean as well as the Mediterranean Sea and found marine plastics in the digestive systems off all severn species: green (Chelonia mydas), loggerhead (Caretta caretta), Kemp’s ridley (Lepidochelys kempii), leatherback (Dermochelys coriacea), flatback (Natator depressus), hawksbill (Eretmochelys imbricata) and olive ridley turtles (Lepidochelys olivacea).

A new study looked at dead juvenile sea turtles from Queensland, Australia, Western Australia and the Indian Ocean that were collected and frozen. The study looked at the entire gastrointestinal tracts and bladders of 121 juveniles of five species, (green, loggerhead, fallback, hawksbill and olive Ridley).

The researchers divided the ingested plastics into sub-categories, including plastic pellets or nurdles,  sheetlike plastic scub as plastic bags, threadlike/filamentous plastic such as remains of rope, foamed plastics such as polystyrene, fragmentssuch as hard plastic pieces and others such as rubber, elastics, and items that are ‘plastic-like’ but don’t fit into a specific category. The plastics were also divided into colors.

What the researchers found was of all the species, the green sea turtle juveniles (Chelonia mydas) ingested the most plastic, with one individual from the Pacific Ocean having 144 pieces in its GI tract and one individual from the Indian Ocean found with 343 pieces of plastic. None of the seven hawksbill (Eretmochelys imbricata ) juveniles from either ocean had any plastics present in their GI tracts. And no turtles had plastics in their bladders.

The study highlights the high incidence of plastic ingestion in post hatchling marine turtles, with filamentous pieces made of polyethylene, polypropylene and nylon that were green and blue in color were the most abundant ingested plastic in the Indian Ocean, with the key component of this plastic discarded fishing gear, called ghost gear.

Ingested marine plastics in the Pacific Ocean were primarily hard plastic fragments, clear and white in coloration, polyethylene (PE) and polypropylene (PP) based, just like in the Indian Ocean. These materials are primarily the material found in single use disposable packaging and the researchers say constitute a large portion of waste stream leaking into the ocean.

The study also found high incidence of plastic ingestion in the Australian flatback turtle, with his rates of ingestion for this species in the Pacific and Indian Ocean.

The complete study, “Plastic Pollution and Small Juvenile Marine Turtles: A Potential Evolutionary Trap”
can be read on the Frontiers in Marine Science website.