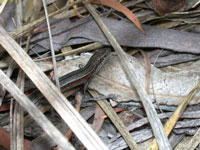 Stressed female lizards tend to give their developing embryos short shrift, but the hardship may ultimately be a good thing for the babies once they're born, according to a new study on stress factors in southern grass skinks (Pseudemoia entrecasteauxii).

Stress changes the way animals allocate energy. During attacks by predators or food shortages, hormones are released that help the body to access stored energy. But for pregnant females, there is a potential trade-off. Stress hormones could take precious energy from their developing embryos, leading to offspring that are not as healthy.

It’s All About Survival
An Australian research team led by Erik Wapstra of the University of Tasmania tested the effects of stress on southern grass skinks (Pseudemoia entrecasteauxii), which are restricted to southeastern parts of the Australian continent. Unlike many lizards, they give birth to live young rather than laying eggs.

In the lab, the researchers recreated the physiology of a stressful situation by artificially raising levels of the stress hormone corticosterone in pregnant skinks. Other skinks had their food intake limited, recreating the stress of a food shortage. The team then measured the health of the stressed mothers and their eventual offspring, and compared their state to mothers and offspring that weren't under stress.

The study found that stressed skinks gave birth to smaller offspring that grew more slowly than those born to skings with lower stress levels. Yet stressed mothers themselves were found to be in better physical shape after giving birth than non-stressed mothers. That's a signal that when stressors are present, mothers tend to allocate energy to self-preservation first.

Equipped to Survive
Despite seemingly getting the short end of the stick though, the news wasn't all bad for the offspring of stressed mothers. According to Wapstra and his colleagues: "We found that small offspring had larger fat reserves relative to body size which may enhance their survival in a stressful post-natal environment."

Previous studies have also shown that smaller juvenile lizards often do better when predator density is high or when food availability is low. It appears that a mother's stress-induced selfishness may actually help to pre-adapt her babies for a stressful world.