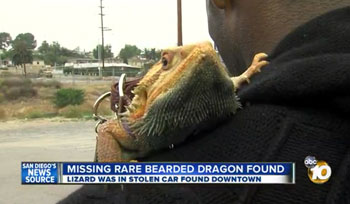 Bearded dragon was stolen/recovered along with model's Lexus in San Diego.

Darius Dio, a Los Angeles fashion model was attending a funeral in San Diego with his pet bearded dragon, Drako, when his car was stolen with Drako inside of it, according to an ABC 10 News report. Dio, a model for the Target department store chain, had left Drako in the car overnight because the Hard Rock Hotel in San Diego where he was staying would not allow his pet lizard to stay with him. 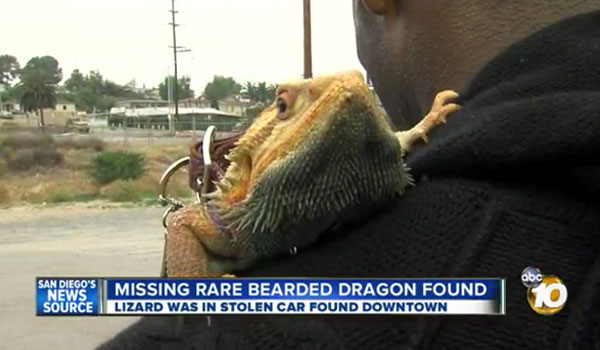 Darius Dio and his bearded dragon.

The next morning he discovered his car stolen and his lizard gone. Dio was beside himself, more upset that the lizard that he raised since it was 2 1/2 weeks old was missing than the fact that his car was stolen. "I have had him for two years and he's my best friend — I am still in disbelief,”  Dio told ABC 10 News. "I didn't really care about the car — when Drako was gone, my heart just fell,” Dio said.

Two days after filing a police report, the car was found near where it was stolen and was taken to an impound lot, where the attendant saw Drako's tail under the dashboard. The lot attendant grabbed the lizard and kept it for safekeeping until Dio returned to claim his lizard, and his car.

Bearded dragons (Pogona vitticeps) are one of the most popular lizards in the pet trade. They are native to Australia and grow to about 2 feet in length. They have a lifespan of six to 10 years with some living much longer. They are generally quite docile, making them an excellent pet for new reptile keepers.