Man grabs the snake and removed the cat's hind legs from the snake's jaws. 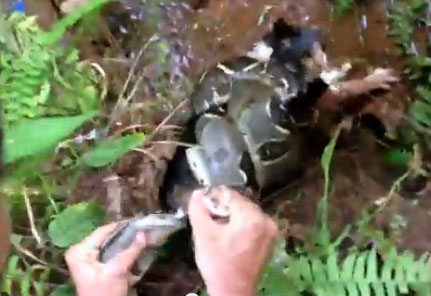 Andres Gonzales grabbed the boa, which may have been an Argentine boa (Boa constrictor occidentalis), by the head and began unwrapping the snake, and when he succeeded in removing the snake's jaws from the hind legs of the cat, the snake released its coils, allowing the cat to escape the clutches of the snake. The cat, seen later in the day by Gonzales, appeared to be ok.

The Boa constrictor species is native to much of Central and South America and can grow to about 10 feet in length. Boa constrictor imperator is one of the most popular boas in the pet trade. Boa constrictor occidentalis is a subspecies and is currently listed under Appendix 1 as an endangered species by CITES.