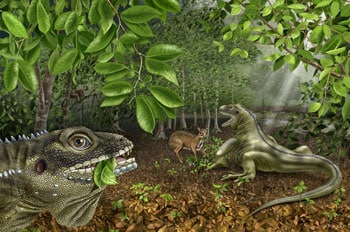 Barbaturex morrisoni roamed the earth more than 36 million years ago.

A giant lizard that roamed the forests of Southeast Asia more than 36 million years ago has been named after Jim Morrison, the lead singer of the Doors and the original Lizard King. The lizard, Barbaturex morrisoni, which means "bearded king Morrison" roamed what is now Myanmar (Burma), and was nearly six feet in length and is estimated to have weighed close to 60 pounds.

University of Nebraska-Lincoln paleontologist Jason Head and a team of U.S. paleontologists describe their find in the Proceedings of the Royal Society B. Based on their research Barbaturex morrisoni was one of the biggest land dwelling lizards.

A plant eater, Barbaturex morrisoni competed with mammals for food and lived in an ecosystem that the scientists describe in their paper as diverse in herbivorous and carnivorous mammals during a warm age in the history of the earth. No ice was present at the North or South poles and atmospheric carbon dioxide levels were very high.

"We think the warm climate during that period of time allowed the evolution of a large body size and the ability of plant-eating lizards to successfully compete in mammal faunas," Head said in a press release put out by the university. "You can't fully understand the evolution of ecosystems in the modern world without looking at the ones that preceded them. We would've never known this by looking at lizards today. By going back in time using the fossil record, we can find unique information on the origin of modern ecosystems."

The fossils of Barbaturex morrisoni were discovered in the 1970s by Russell Ciochon of the University of Iowa and his colleagues but hadn't been fully studied until several years ago, when Head and Patricia Holroyd of the University of California, at Berkeley took a hard look at the fossils. They found that Barbaturex morrisoni's bones were similar to that of current day bearded dragons, chameleons, and plant eaters such as Uromastyx and other spiny-tailed lizards. They compared the lizard's teeth with that of its modern day counterparts and noted how big the lizard actually was. Head also said that based on the ridgeline on the underside of its jaw, Barbaturex morrisoni most likely supported soft tissues that give modern lizards a bearded look, hence the name Barbaturex, which means bearded king. Head also said that he had been listening quite a bit to The Doors during his research, and some of their music made reference to reptiles and ancient places, and since Morrison was the self proclaimed "Lizard King" it all kind of made sense in naming the lizard after Jim Morrison.


The main contributors in identifying and analyzing the lizard include Head and Holroyd, Greg Gunnell of Duke University and Ciochon. The full text to the paper "Giant lizards occupied herbivorous mammalian ecospace during the Paleogene greenhouse in Southeast Asia" can be found here.