Clemson University student set out to count number of drivers who swerve to hit a rubber turtle.

A Clemson University student who wants to devise a plan to help Eastern box turtles (Terrapene carolina) to safely cross roads got a dose of the dark side of human nature when his study subject, a realistic rubber turtle, was repeatedly run over by drivers. According to an Associated Press news report, Nathan Weaver, a 22-year-old senior at Clemson’s School of Agricultural, Forest and Environmental Sciences, placed the rubber turtle on a busy road near the Clemson University campus. Weaver then walked to the side of the road and watched as seven drivers over the course of just one hour deliberately swerved to run the rubber turtle over. Weaver said more drivers tried to hit the turtle but missed. 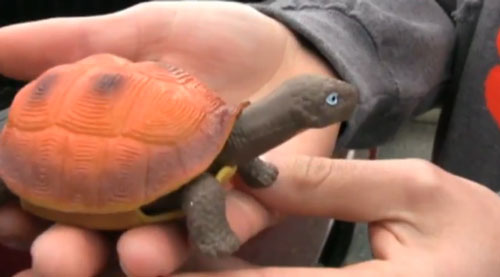 “I’ve heard of people and from friends who knew people who ran over turtles. But to see it out here like this was a bit shocking,” Weaver told the AP.

“Nate’s study is important because it is studying the potential effects of automobiles on a sensitive group of organisms, which is reptiles,” Rob Baldwin, associate professor of conservation biology at Clemson University told the AP. “Reptiles are declining globally, and one of the main reasons they are declining in this country is because of road mortality.”

Turning turtles into road kill is not surprising to researchers. Hal Herzog, a psychology professor at Western Carolina University asked 110 students if they had intentionally run over a turtle or had been a passenger in a car with a driver who did. Thirty four students raised their hands. Herzog is the author of the book, “Some We Love, Some We Hate, Some We Eat,” which details human relationships with animals.

Weaver is still trying to determine how best to get turtles across the road to keep the population of box turtles shrinking further than it already has. Turtle underpasses as well as turtle education campaigns aimed at teen drivers are among the ideas. The idea of a turtle underpass is not that farfetched. In Northern California, three tunnels were created for the California tiger salamander in an effort to help them to cross the road to a nearby breeding pond.