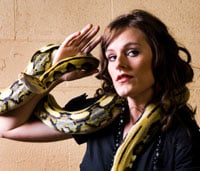 It’s amazing how fearful people are of snakes.

While channel surfing last night I happened upon an episode of Cops just in time to witness a call in which some police officers were called to somebody’s house because of a snake. I don’t know what town they were in, but I think it was somewhere in the South. They arrived at the house to find a woman inside who was going absolutely ballistic because she saw a snake on her front porch. I couldn’t believe how over the top she was acting. As someone who is not afraid of snakes, this kind of behavior is extremely alien to me. Don’t get me wrong, I’m not condemning it. I just have trouble identifying with it.

But identify with it we must, at least sometimes. It’s people like this you need to keep in mind should you ever deign to take your pet reptiles out in public. I’ve said it before, but remember to act responsibly if you must take your reptiles out. My flesh crawls when I think what might happen if someone with a tame boa on their neck happened to walk by this lady from Cops. A heart attack could be a definite possibility.

So the cops show up at the lady’s house and you could hear her wailing and carrying on inside. You would think she saw the Grim Reaper himself out there rather than a snake. At first no snake was in sight and one of the cops was even grumpily saying, “There aren’t any snakes out here,” as he poked around her porch and steps. The lady took no comfort in this and continued her hysterics. By the sounds of it there were kids inside, too, who were also acting up.

Then lo and behold, the snake made its appearance when it poked its head over the roof above the porch. When the cops acknowledged that there was indeed a snake out there I thought the lady inside would skyrocket right through her roof, sending splintered wood in all directions as she jettisoned into space.

The two cops, upon seeing the snake, called a third over. They weren’t sure whether or not it was venomous, and they didn’t feel qualified to deal with it. So a third, more burly, cop appeared to poke at it with his baton. Upon being discovered the snake attempted to crawl off the porch roof onto a window awning. Things did not go well for the snake from this point on. Punctuated by repeated shouts from the people inside, the third cop smacked the snake’s head with his baton as it dangled from above. It fell onto the porch railing (intensified screams from inside the house) and the cop smashed it again. “You’ve got to get it on the head,” he said.

I couldn’t tell for sure what kind of snake it was. It was black, and I think I saw some light coloration on the belly. The cop called it a “black snake,” a term often used to describe a black rat snake (Elaphe obsoleta). I think it was either that or maybe a southern black racer (Coluber constrictor priapis). Whatever it was, it ended up, as the cop who killed it stated, “10-7” (“out of service”). And into a trash can it went.

It is this third cop’s behavior that I found particularly distressing. The hysterical woman was scared out of her wits, but this guy was cool as a cucumber when he killed the snake. He seemed familiar with it, too, and my guess is that he knew it was not venomous. So why’d he have to kill it? Afterward, one of the other cops said that they would not normally kill the snake, but that this time was an exception. I don’t remember the reason he gave for it being an exception, but a lingering thought in my head is that they just thought it would be easier to kill it and be done with it.

So another harmless snake bites the dust, on national television yet. I hope I’ve painted a clear picture of how the people who phoned the cops were acting. Think about that the next time you want to take your pet snake to a mall, beach, park or wherever. Consider carefully, because I really don’t want to see you on Cops next time.