Know your snake inside and out with this snake anatomy introduction.

I remember a very good professor telling me once: “You have to know the normal, or you will never know the abnormal.” Veterinarians must know anatomy in order to perform a physical examination, interpret X-rays and perform surgery. Reptilekeepers also should know anatomy, so they can examine their charges, perform physicals and identify problems.

Because snakes are basically one long tube, it is possible to partition their main anatomical parts into sections. If you lay the snake out straight on a table with its head on your left, going from left to right, the first 25 percent of the snake consists of the head, the esophagus and trachea, and the heart. Those are the major organs and parts.

In the second quarter, about 26 to 50 percent of the snake, are the top of the lungs, the liver, and then three-fourths of the way down the liver, the stomach. In the third quarter, about 51 to 75 percent of the snake, you encounter the gall bladder, the spleen and the pancreas (or the splenopancreas depending on the species). Following this triad of organs you will find the gonads (testes or ovaries). Coursing between these structures is the small intestine, and adjacent to them is the right lung (and in some species the left lung, as well). In the last quarter, the last 76 to 100 percent of the snake, you’ll find the junction between the small and large intestine, the cecum (if present), the kidneys (right in front of the left) and the cloaca.

If you can remember this anatomical road map for snakes, you’ll be a better herpetologist.

Most reptiles have four legs. Snakes, however, do not have legs. They also lack a pectoral girdle (shoulder bones) and — with the exception of the boids, which retain a vestigial pelvis and external spurs — they also lack a pelvic girdle (rear leg support). As with all reptiles, snakes are covered with scales, which offer protection from desiccation and injury. They can be smooth and shiny, such as a python’s scales, or rough and dull, such as a hognose snake’s scales. The outer, thin layer is the epidermis, which is shed on a regular basis. The inner, thicker, more developed layer is the dermis. This dermal layer is filled with chromatophores, the pigment cells that give snakes their color.

Scales are formed largely of keratin derived from the epidermis. As the snake grows, which they do their entire lives (growth just slows as they get older), this outer layer of epidermis sheds off. New scales grow beneath the older outer scales. Eventually, the outer layer sheds off, usually in one piece and inverted as if it were a sock pulled from the top down. This shedding process is called ecdysis.

In general, if the shed skin comes off in shards, it may be a sign of some underlying problem. The snake’s health or husbandry issues, such as improper environmental temperatures, humidity or caging furniture, might be to blame. Scales are attached to each other by soft skin — generally not noticed from the outside — that folds inward between each adjacent scale. Scales cannot stretch, but when a snake eats a large meal, the skin folds are pulled out straight to expand the surface area.

Basically two types of scales are on a snake. Its top and sides are generally covered by smaller scales. These can juxtapose or overlap like shingles on a roof. The bottom of the snake is covered by short but very wide scales that look like rungs on a ladder. These special scales are called scutes. They form the belly of the snake and are integral in the snake’s ability to move.

Snakes have two eyes, but they do not have eyelids. A spectacle, a transparent scale that is actually part of the skin, protects each eye. When a snake undergoes ecdysis, it sloughs this spectacle off along with its skin. Spectacles turn a light, semiopaque blue as the snake prepares to shed. Herpetologists call this condition “in the blue.” This is normal, but snakekeepers who have never seen it happen before may mistake it for a problem. Immediately before the actual shed, spectacles again become clear. This means that the shed is imminent.

It is imperative that shed skin be examined every time a snake sheds to make sure these spectacles come off. Occasionally one does not, and this results in a retained eye cap. Like other shedding problems, a retained spectacle can be a sign of a health or husbandry problem. In addition, if a retained spectacle is not removed, it can cause problems with the animal’s vision and can potentially damage the eye.

Snakes lack an external ear, but they do have an internal ear, and they are capable of detecting low frequency sounds ranging from 100 to 700 hertz. (A young person with normal hearing can hear frequencies between approximately 20 and 20,000 hertz.) A snake’s inner ear also allows it to detect motion, static position and sound waves traveling through the ground.

Another external feature found in boids and crotalids are the labial pits, a series of openings along the upper and lower lips that contain heat-sensing organs. These pits help snakes acquire prey, and they warn them of possible predators nearby.

All snakes have a single vent, which is an excretory opening. This vent opens on the bottom of the snake near the tail and leads into a compound structure called the cloaca, which will be discussed later.

A snake’s head contains the eyes, nostrils, mouth (and structures within), brain, and a special sensory structure called the vomeronasal or Jacobson’s organ. Its paired openings are just in front of the snake’s choana, the open slitlike structure on the upper inside of the reptile’s mouth. All snakes have a forked tongue. When they flick their tongue, the tips pick up minute scent particles in the air and place them in direct contact with this organ. In essence, this is how a snake smells.

Snakes’ teeth line the inner surfaces of the upper and lower jawbones (maxilla and mandible, respectively). Nonvenomous snakes have four rows of upper teeth: two rows attached to the maxillary (outer) bones, and two rows attached to the palatine and pterygoid (inner) bones. Only two rows are on the lower jaw; one is attached to each mandible. Most venomous snakes substitute fangs for the maxillary teeth. These fangs can either be in the front of the mouth, such as in a rattlesnake, or the back of the mouth, such as in a hognose snake.

Snakes use their teeth for grasping, not chewing. Their teeth are recurved, so once a prey item is bitten, the only direction for it to move is toward the snake’s stomach. 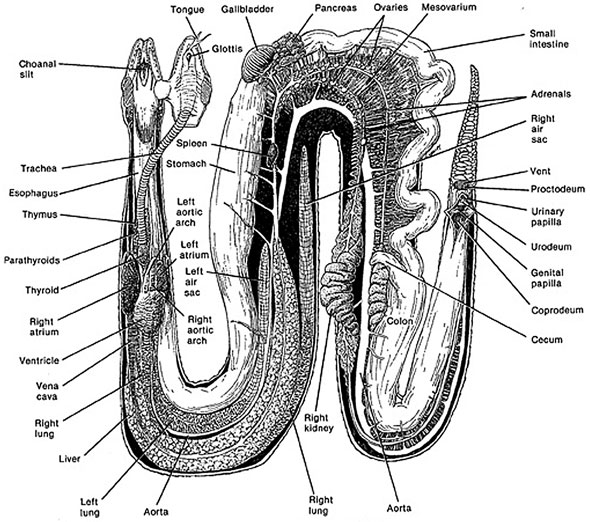