ReptileChannel Editor Russ Case is a long-time reptile enthusiast, beginning with a childhood spent in constant search of reptiles and amphibians to k 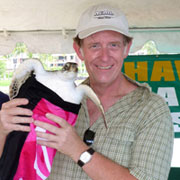 ReptileChannel Editor Russ Case is a long-time reptile enthusiast, beginning with a childhood spent in constant search of reptiles and amphibians to keep as pets, originating in the woods of his native NewJersey and later in the scrub and forests of Southern California. Eventually discovering unique species in pet stores and reptile specialty shops, he has maintained many different reptile species over the years. Turtles were an early favorite, but he has also kept a variety of lizards, salamanders and frogs, as well as an occasional boa constrictor or other snake, and a single caiman (a cousin to the alligator).

Case has been a part of the professional reptile industry since 1993, when he was hired by Lumina Media, LLC to be not only the managing editor of Bird Talk magazine, but also the original managing editor of REPTILES (under original editor Phillip Samuelson) beginning with the magazine’s debut issue in October 1993.  REPTILES was an immediate hit, quickly going from a bimonthly magazine to a monthly one, and playing an integral role in fueling the public’s growing fascination with keeping pet reptiles and amphibians. Case remained REPTILES’ managing editor, and later the editor of its sister publication, Reptiles USA, until he left the reptile magazines in 1997 to take on new challenges within Lumina Media’s editorial department.

He returned to REPTILES in 2001 as the magazine’s lead editor, which he remains today, in addition to being a group editor of a variety of other Lumina Media titles, including Aquarium Fish International, Marine Fish and Reef USA, Motorcycle Consumer News, Ponds USA, Auto Restorer and others. The author of three children’s books – Snakes, Lizards and Turtles and Tortoises – which comprise the Beginning Vivarium Systems series of books by BowTie Press, Case also writes ReptileChannel’s popular reptile-oriented blog, “Random Neural Firings of a REPTILES Editor.” He can often be found engaging the reptile community at reptile expos and other industry events and, more recently, by moderating the REPTILES Facebook page, where his frequent interaction and humor have helped drive it to become one of Lumina Media’s most popular Facebook pages.

Though he is involved with a variety of magazines and websites covering assorted topics, reptiles and amphibians remain Case’s primary focus as he continues to oversee ReptileChannel and REPTILES, the world’s leading reptile magazine.