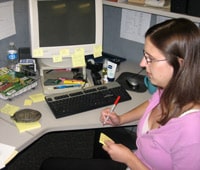 March was my first month at REPTILES magazine. I’m the new associate editor, and while I spend a lot of my time on the magazine, I’ll also be contributing on ReptileChannel.com. This week, Russ is out showing some friends about town. He’s asked me to do a guest blog, which means I get to give you the behind-the-scenes scoop on what it’s really like working for REPTILES magazine. Read on for the “classified” information.

Secret #1: We’re not all reptile-crazy. Yet. I got my start in publishing at a business magazine, and I’ve pretty much stayed in that field since then. I only kept one lizard as a kid (cleverly named “Lizzy”). But I do love animals, and right now I’m in herp-overload, learning as much as I can about reptiles and amphibians in between editing, writing and prepping editorial content. Lucky for me, the team here has been especially helpful, easing me in to tasks and answering my frequent questions.

Last month, I took a trip to one of my favorite places, the San Diego Zoo, and I got to see the Galápagos tortoises in action. Two of them were near the short concrete divider wall at the front of their exhibit. One was rather feisty, placing its front feet on the wall and stretching its neck out, as if trying to get close to the zoo visitor standing on the other side. I realize now that I was seeing some of the behavior that so endears tortoises and turtles to their keepers. They like and seem to be drawn to humans. Unless, of course, the clever tortoise was trying to escape.

Secret #2: Despite what Russ would have you believe, Helmut is actually the boss. For those of you who don’t know, Helmut is the red-eared slider that lives in “Russ’” office. Helmut has Russ trained. He does some kind of mesmerizing turtle dance in his aquarium whenever hungry, prompting Russ to feed him.

Secret #3: I thought there would be some rivalries here at BowTie Inc. BowTie is the company that owns REPTILES magazine, as well as several other pet and hobby magazines, trade journals, books, websites, etc. Subjects up here on the editorial floor include ferrets, cats, dogs, more dogs, birds, fish, rabbits, motorcycles and more. Worst of all, we’ve got the dog people hunkered down right next to the cat people. I expected some bickering. Some old-fashioned, third-grade “My Chihuahua is smarter than your snake,” “My cat could take your dog,” etc. But I haven’t heard a peep. I think I’ve figured out why. Most everyone here enjoys animals. We may have our favorites, but we’re all devoted to providing the best information on how to care for and keep animals.

Those are all the secrets I can give away for now, but look for my name in REPTILES magazine and on ReptileChannel.com. I’m already proud to be a part of the team that’s such a great source for herp knowledge.