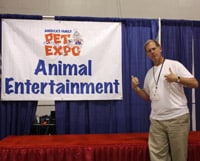 Reptiles In The Limelight

Touting the merits of reptiles with a presentation at the America’s Family Pet Expo.

For the second year in a row, the REPTILES and ReptileChannel editors made a rare public speaking appearance at the America’s Family Pet Expo (AFPE) in Costa Mesa, Calif. Just exactly how do we get inflicted upon the unsuspecting attendees at the show? It’s because we’re a sponsor; BowTie publishes the AFPE show program every year. Because we do that, we are given the opportunity to stage a presentation about pets for the enjoyment of AFPE attendees.

The America’s Family Pet Expo is held every year, and at it you will find many booths featuring many different pet products. Adoption and rescue organizations are also well represented. Every year I come away wanting to get a dog more than ever. Maybe someday I will actually get one. There are also shows, such as wiener dog races, bird shows and diving dog exhibitions. This year we watched the antics of the actors, both human and hairy, of the Popovich Comedy Pet Theater. This show bordered on the surreal due to its many costumed pets (including the most surrealistic of all, a dog strapped into an elephant costume), but I will say it’s the first time I’ve seen a bunch of performing dogs, cats and rats all in one show. There is also a kids’ aquarium-decorating contest, (sponsored this year by Marineland, JurassiPet, Tetra, Seachem and Instant Ocean), police dog demonstrations, a “Parade of Adoptable Darlings” (dogs in costume, available for adoption; this is another event that BowTie organizes), pony rides and petting zoos. It’s a fun way to spend a day if you’re a pet lover!

Anyway, amidst the hundreds of dog and cat aficionados who make up the bulk of the show’s attendees (including dog owners who paint their dogs’ toenails), we set up shop and talk about reptiles. Reptiles, too, are featured at the AFPE, but the reptile groups are outnumbered by the dog and cat people by a large margin. This year, waving the pro-reptile flags were Prehistoric Pets/Jurassic Parties, the Southern California Herpetology Association, the San Diego Herpetological Society, the Southwestern Herpetologists Society and the California Turtle & Tortoise Club.

We began planning our presentation weeks before the show. Last year we had a reptiles-only presentation, but this year it was decided that we would have a “Good Pets for Families” presentation. This way, editors from all the different animal magazines BowTie publishes would have several minutes to extol the virtues of the animals that were the focus of their individual magazines. The show was held last Friday, Saturday and Sunday. I “performed” the reptile segment of the presentation on Friday; ReptileChannel’s Associate Web Editor, Ben Weiner, gave it on Saturday; and REPTILES Managing Editor Stephanie Starr gave it on Sunday.

The first thing I wanted to do was parade around some reptiles in front of the stage area, to attract people’s attention prior to the presentation. That way we could get them over to our area and invite them to sit down and attend. Once again, we’re indebted to Prehistoric Pets for loaning us some live animals. Because the nature of our talk was good reptiles for families, we were going to focus on the best beginner species. And you know which ones those are, right? Thus, we borrowed a bearded dragon, leopard gecko, corn snake and Russian tortoise from Prehistoric Pets, as well as a nice, fat ball python from the San Diego Herpetological Society (thanks again to both of you!).

About 40 minutes before showtime, Ben, Stephanie and I, along with our newest staffer, REPTILES Associate Editor Carrie Brenner, began walking back and forth in front of the stage while holding the reptiles. As you know, reptiles are like magnets when it comes to arousing bystanders’ interest. There was a lot of foot traffic, and many people came over to take a look at the reptiles. They were invited to touch them gently, and to get a close-up look. I especially like making such offers to people who are unsure. I never shove a snake right at them, but gently coax them to examine the animals, and to touch a snake so they can learn for themselves that snakes are not slimy (it amazes me how many people still think that they are). Inevitably, there are parents who want their kids to have their pictures taken with some reptiles held next to them. Like I’ve said here before, it’s always fun to show off reptiles to an appreciative crowd!

When the time came to give the talk – we were up fourth, after the cat, bird and small animal editors had their turns at the microphone – I went to the front of the crowd, and the first thing I did was say something like this: “Now, I like dogs and cats, but when you’re considering an animal for the family, including children, consider this: reptiles don’t bark, they don’t need to go for a walk, they don’t chew on furniture, they don’t shed, they can be left on their own for a couple days, if necessary, and they don’t all need much space compared to other pets.” And with that affirmation of reptiles superiority as the best pets you could ever hope to have in regard to convenience and low maintenance, I then briefly discussed each of the beginner species we had on hand.

I think the talk went well – the audience even got a bonus performance from the Russian tortoise, which went to the bathroom just before the talk began — and a bunch of parents and their kids lingered afterward for a chance to meet the reptiles and have their photos taken with them. You always have to be on the lookout for extra-grabby little kids at such times. There was one who seemed intent to latch onto any reptile and try to squeeze it, so as soon as he tried that I had to be careful to keep the animals out of his reach. His mother did her best to stop him from being too forceful, but that kid seemed like an octopus at times, with eight grasping hands. Still, a good time was had by all.

That was Friday. The show was much more crowded on Saturday and Sunday, when Ben and Steph gave their talks. There were no mishaps on either of those days, although the Russian tortoise went to the bathroom again on Saturday. It’s nice to know there are some animals, just like people, that you know you can always count on.