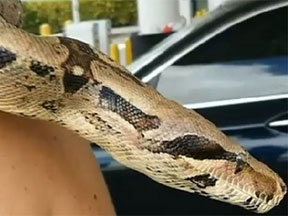 A South Florida woman left her snake in the car, which which required a trip to the dealership.

Most people take their car to a car dealer to get serviced, not to remove a pet boa constrictor. But that is exactly what happened at a South Florida BMW dealership when a customer brought her Mini Cooper in to get help in extracting her pet boa constrictor (Boa constrictor) that crawled up inside the rear paneling of her car. The woman, who didn't want to be identified, takes her pet snake with her everywhere and usually secures it in a travel bag in her trunk. She apparently forgot the bag at home and just put the snake into the trunk. The snake being a snake decided to move about and disappeared into the car's body panel. 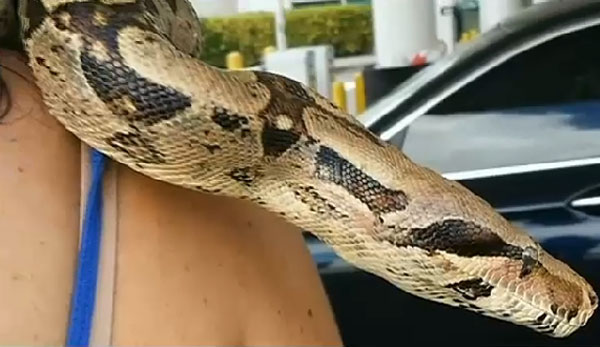 Mitch Packer who works at the Coconut Creek dealership got the call to remove the snake because everyone at the dealership knows that his family are reptile keepers and they had snakes as pets. Mechanic Chris Braun removed the car's body panel and luckily the snake's head was sticking out and Braun grabbed the head and pulled out a very large boa constrictor. Vista BMW service adviser Jim Cocchiola captured the entire event on cell phone video. Braun told WSVN-TV that he had a fear of snakes, having been bitten by one as a child, but said it was someone's pet stuck in the car and he had to do something to prevent the snake from dying in the car. The woman didn't want to appear on camera but was happily reunited with her pet.

The boa constrictor is one of the more popular snakes in the reptile hobby. It can grow up to 10 feet in length, though the average size is four to six feet, with the females being larger. They maintain an easy going temperament and are relatively easy to feed on frozen-thawed feeders. Like the ball python, the boa constrictor is available ina variety of different color mutations, or morphs.