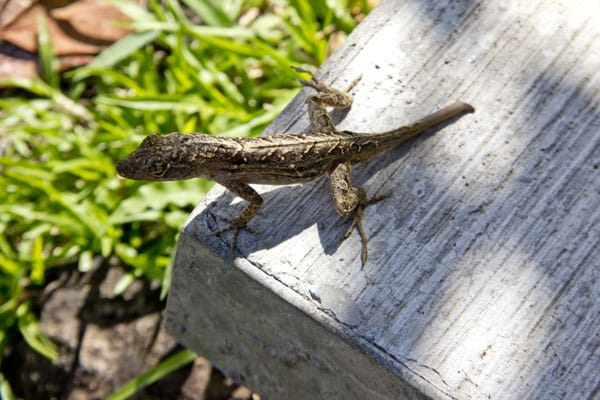 O'ahu's Manoa Valley is home to a variety of herptiles.

The first reptile I ever saw in Hawaii was a neonate Jackson's chameleon (Chamaeleo jacksonii xantholophus) that was crossing the walkway at the Pali Lookout in Nu'uanu Pali State Park on O’ahu. It was very small, no bigger than a stick of Trident gum. It was moving with purpose across the hot asphalt to get to the jungle side of the park. It was a cute little guy. The Jackson's chameleon, like virtually every lizard and amphibian in Hawaii, is an introduced species. One lizard that was native to Hawaii, the  copper striped blue-tailed skink (Emoia impar), or Hawaiian skink, was declared extinct in 2013.

In fact, the only native reptiles of Hawaii include all the species of sea turtles that can be found in Hawaiian waters and the yellow bellied sea snake (Pelamis platurus). All the other lizards, turtles and amphibians living in the islands today, such as the poison dart frog, the Australian cane toad, the bull frog, the red-eared slider, the two species of softshell turtles (the Wattle-necked softshell turtle (Palea steindachneri) and the Chinese softshell turtle (Pelodiscus sinensis) and the various lizards such as the green and brown anole, the giant day geckos, Tokay geckos, and house geckos, are all introduced species. The Jackson's chameleon for example was released on a small plot of land in Kane’ohe, O’ahu and soon made its way to most all islands in the Hawaiian chain. The invasive Puerto Rican coqui llanero treefrog, made its way, possibly via plants, to the Big Island of Hawaii and has been found on Maui and O'ahu. Check the video below to hear a single. coqui llanero frog call, and then imagine hundreds of them calling as you are trying to get some shut eye. 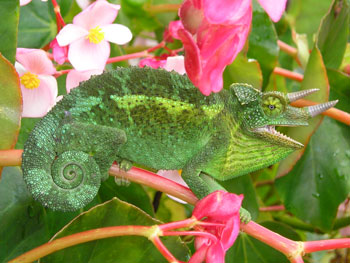 During my herping adventures to O'ahu over the past few years, I've seen all types of lizards and amphibians. A few of them can be found right outside my family home in O'ahu's Manoa Valley, basking on the volcanic rock wall that separates the house from the street. I will discuss here several different herps that can be found just in the yard and adjacent streets in Manoa.

Jackson's Chameleon (Chamaeleo jacksonii xantholophus)The Jackson's chameleon is the most popular of the introduced lizards in Hawaii, probably due to its resemblance to the dinosaurs. It is such an interesting lizard with binocular eyes and a sticky tongue that is much longer than its body. On the windward side of the island, there is a street called Jackson Chameleon Way in Wai'manalo, named after what else,Chamaeleo jacksonii xantholophus.On that same street, you can often find a street vendor selling the chameleons to passersby for around $10-15. The Jackson's chameleon can be found in the wet rainforest areas on O'ahu, including Round Top Drive, Manoa Falls, and virtually any area in the Ko'olau mountain range where there is ample green trees, of which there are plenty. 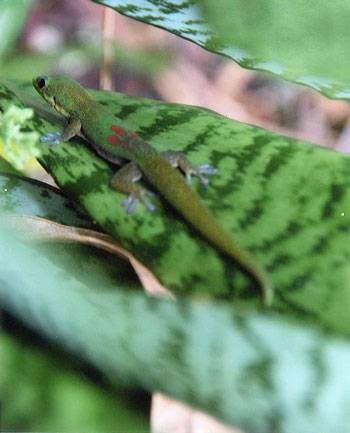 The orange spotted day gecko (Phelsuma guimbeaui guimbeaui), a species native to Mauritius, along with the gold dust day gecko (Phelsuma laticauda), native to Madagascar and the Comoros islands, are the two species of day gecko that are established on O'ahu. It is speculated that the day geckos became established on O'ahu in the mid 1980s and the species has also been found on the Big Island and Kauai. On O'ahu, the day gecko is established in Makiki, Manoa and Nuuanu in Metro Oahu and in Kane’ohe and Kailua on the windward side of Oahu. These two species are rather benign and haven't had any impact on the native flora and fauna. In fact, according to the late Sean McKeown, author of "A Field Guide to Reptiles and Amphibians in the Hawaiian Islands", these two day geckos feed on introduced insects and invertebrates that are not native to the Hawaiian islands. The orange spotted day gecko is also known to feed on the nectar of flowers and juices of overly ripe fruit. 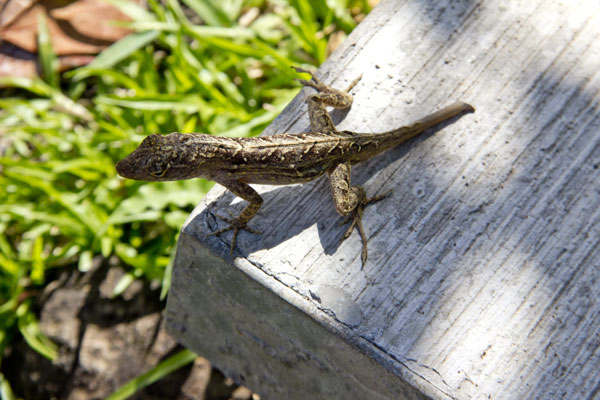 The gold dust day gecko (Phelsuma laticauda) apparently arrived via a University of Hawaii at Manoa student back in the 1970s, according to McKeown. The student released just eight specimens in upper Manoa Valley, a lush tropical valley with plenty of plant and animal matter and enough rainfall to encourage growth of a variety of insects and introduced reptiles. The establishment of a sizable population of these beautiful lizards became known in 1979, McKeown said in his field guide, at which time island reptile enthusiasts captured specimens that had roots from the original eight, and released them in the neighborhoods of Diamond Head, Kahala and Aina Haina on the East side of O'ahu, and in Kailua on the windward side.

The day geckos don’t maintain protected status in Hawaii but are protected under Appendix II of CITES.

The brown anole (Anolis sagrei) is native to Cuba and the Bahamas and probably came to Hawaii as a stowaway on some plants or via the pet trade. It was first seen in 1980 on O'ahu. It was easily the most abundant lizard I observed in Manoa. They can be found on stone steps and rock walls sunning themselves and waiting for their next prey item, which can range from small insects such as crickets and cockroaches to spiders and smaller lizards.

The brown anole will eat anything that it can fit in its mouth, even green anoles, another introduced species in Hawaii. It grows to about 5 to 8 inches in total length and can be found on O'ahu on sidewalks, canals, yards, shrubs and planters. 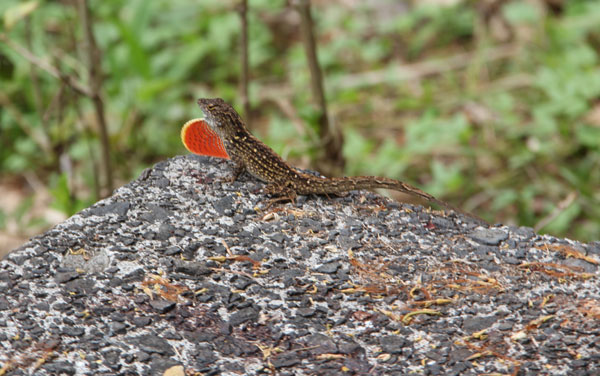 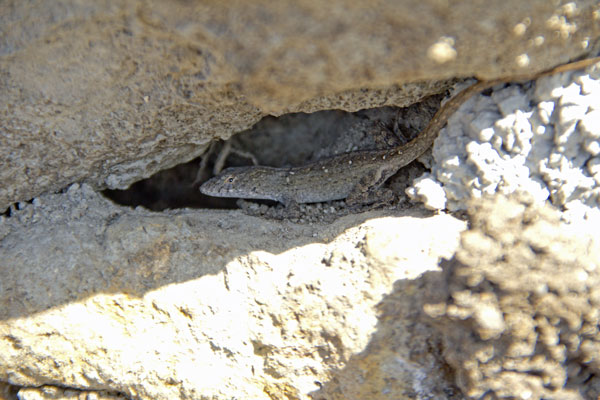 The green anole, or Carolina anole (Anole carolinensis) was introduced to Hawaii in the 1950s via the pet trade. It can be found throughout Manoa but seems to stay in high humidity areas, near plants with large leaves in which it can bask. It is a more arboreal species than that of the brown anole, which is a ground dwelling lizard. Their diet includes spiders, flies, crickets, small beetles and other insects. It grows to 5-9 inches in total length. It can be found on O'ahu, Maui, the Big Island, Kaua'i and Moloka'i. 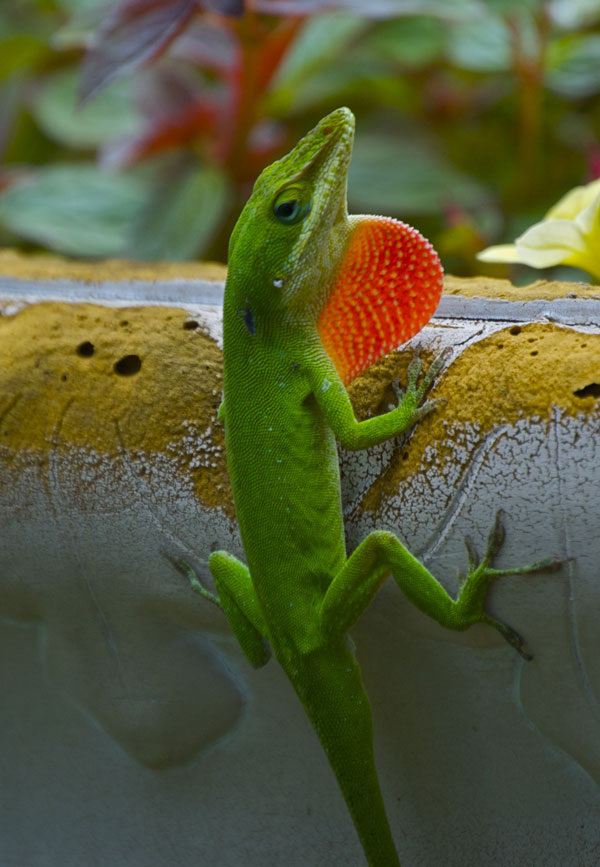 My first encounter with the green and black poison dart frog (Dendrobates auratus) occurred as I was walking up the hill to my home after a walk around the neighborhood. An adult specimen was crossing the road, and in my haste, I attempted to capture the frog on video. It crossed the road rather quickly and hopped up the side of a curb and into the leaf matter under hedges in front of the house. Nevertheless, I was able to capture better photographs of the frog at the Waioli Tea Room, also in Manoa and just a few streets from my house. 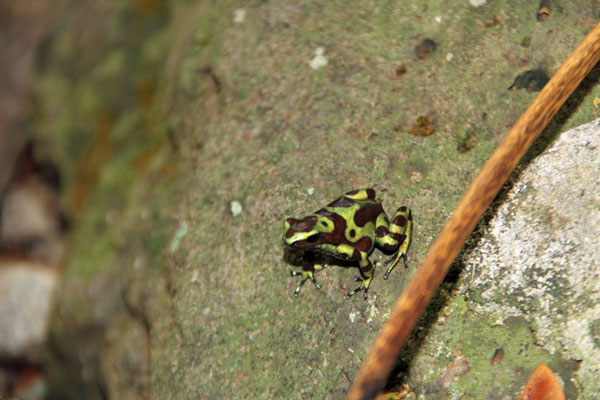 Dendrobates auratus is native to Central America and was introduced to Hawaii to eat non-native mosquitos when the state was a territory. More than 200 specimens were brought to the islands by entomologist David T. Fullway in 1932. The frog is small, about the size of a quarter, and can be found in moist and highly vegetated valleys on Leeward and Windward O'ahu, and of course in Manoa Valley which abuts up to the Ko'olau mountain range.

The giant toads aka cane toads are most often seen flattened on the roads of Manoa and Nu'uanu valleys, two of the wettest areas on O’ahu when it comes to rainfall. My first encounter with the giant toad occurred in the year 2000 in Manoa. A friend of mine from the mainland flew in to surf and during one of our trips to the local Long’s drug store, we happened upon a street full of toads on the move. It was pouring rain and what seemed like hundreds of toads had come out to cross the street for whatever reason. My friend, Eddie Dietrich told me to stop the car. He jumped out and grabbed one of the toads, which promptly urinated on him, causing Eddie to hold the toad out the window as we drove back to the house. When we arrived, Eddie brought the toad into the house and set it on the book that my then 6-year-old son was reading, which happened to be a book about toads and frogs! After a few minutes, my son released the toad into our garden. Several months later, we found the toad, all fattened up from the cockroaches it ate in the garden, another introduced species that can be found all over Hawaii. 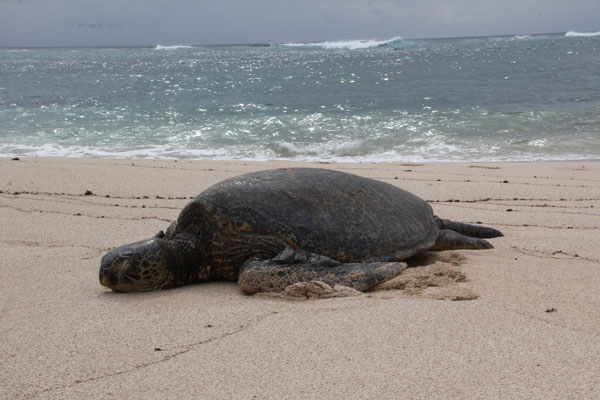 The cane toad was brought into Hawaii via Puerto Rico in 1932 in an attempt to control sugarcane beetles, according to Sean McKeown’s book. The Hawaiian Sugar Planter’s Association brought in 148 adult toads, 68 which were released in upper Manoa Valley. The toad Eddie dropped into my son’s lap that night was a descendant of the 68 released more than 80 years ago.

Because the Hawaiian green sea turtle is a protected and endangered species, (Chelonia Mydas was listed as a threatened species under the Endangered Species Act in 1978, and all sea turtles in the Hawaiian island chain are protected under Hawaiian law) every day that they are on the beach, volunteers with Malama na Honu (friends of the turtle) cordon off the area with a simple red rope on the sand to keep people from getting too close to the turtles. The turtles for the most part just lay on the sand and bask, eyes closed, for anywhere between a couple hours to all day and into the night. The beach is a particularly good spot for the turtles due to the abundance of algae and limu (seaweed) that are right off the shoreline. The volunteers have a fairly extensive network that enables them to monitor the beach every day that the turtles are present.The volunteers stay there all day and leave during the night, even though the turtles may still remain on the beach.

The above mentioned herps are just a few of the reptiles and amphibians that I saw during my short trip to O’ahu. Every day is a new day with the threat of introduced species on the island very real. A nine-foot boa constrictor was captured by pig hunters near the Halawa Correctional Facility in July 2011, and various other species have been turned in no questions asked thanks to the state’s reptile amnesty program. So far, the state has been able to keep out the brown tree snake that has devastated the bird populations on Guam, though several specimens have made it to Hawaii only to be intercepted by the Hawaii State Department of Agriculture. The Department of Agriculture is vigilant in keeping invasive reptiles out of Hawaii. In recent years it has captured or confiscated a variety of reptiles, including caimans, leopard geckos, black rat snakes, Burmese pythons, a veiled chameleon, and a gravid monitor lizard that almost made it to freedom in Manoa Valley. While many of the established animals were intentionally introduced when Hawaii was a territory of the United States, today the state is doing all it can to keep other reptiles out of the islands.

Other Introduced Reptiles in Hawaii