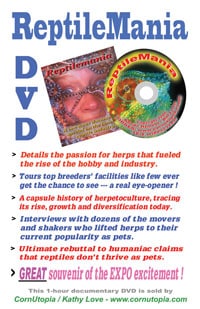 Rattlesnakes Packing More Venom In California
Where Do You Buy Reptiles?
New Species Of Glass Frog Looks Like Kermit The Frog

Sometimes I’m called upon to make an appearance at a reptile-related function, give a presentation, appear on radio or otherwise put my face (or voice) “out there” on behalf of the reptile industry. One such request I received last year was to appear in a documentary about the reptile industry that one of my past authors, Dav Kauffman, was creating. Dav had some experience in this area, and had made some straight-to-DVD features previously. Plus I knew he was into reptiles, having written articles for me in the past, so he seemed qualified to handle such a project.

I made a brief appearance in another reptile documentary previously. This one was made in 2005 and was called ReptileMania. The people behind it were Bill Love, who should be a familiar name to REPTILES and ReptileChannel readers, and Adrian Hemens. I was moseying around the aisles at one of the National Reptile Breeders Expos in Daytona, when Bill and Adrian came up to me to ask if I’d be willing to be filmed right then and there saying something about the reptile industry. True guerilla filmmaking! So they set up a camera and filmed me talking. I think I talked about the importance of children being involved in the hobby (coincidentally, this was the subject of my June 1 blog). Other reptile industry figures were also interviewed, including some of the top reptile breeders such as Bert Langerwerf, Bob Clark, Tom Crutchfield and others. If you’re interested, you can purchase the one-hour ReptileMania DVD here.

Dav contacted me to see if I would agree to appear in his film, Herpers, which was to be about the reptile industry and the people who populate it. After hearing him describe what he had in mind, my priority was to make sure that the film would not portray reptile hobbyists and industry people as a bunch of weirdos. If you’ve seen the documentary Trekkies, this was exactly the type of documentary I was concerned Dav was planning to make. Trekkies, obviously, was about Star Trek fans, and the people it focused upon were not always featured in a very flattering way. They were portrayed as odd eccentrics. I still enjoyed the movie, but I’m not sure how other Trekkies (or Trekkers, as the case may be) felt about it. I imagine that some were fine with it, while others hated it.

I didn’t want to participate in a film with a primary goal of poking fun at people who love reptiles, and I was assured that that was not its purpose. Its purpose, Dav told me, was to demonstrate how vital the reptile industry is, and that real people are very devoted to it, many to the point that their livelihoods depend upon it. People watching the film who think people who like reptiles are weird should come away thinking, “Wow, it turns out I really didn’t know much about this world.”

Dav pitched his project and I did agree to appear in it. So one day he and his director of photography, Brian Walsted, came here to Irvine, Calif., to film my short segment. My role was to discuss some of the most current reptile ownership facts and figures, such as how many U.S. households owned reptiles, what types of animals were most popular, growth compared to other pet categories, etc. Filming here in the editorial offices would be potentially disruptive, so, since it was a nice, sunny day, we decided to film in a nearby park.

At the park, the first thing we noticed was the place was completely awash in duck and goose excrement. It was pretty gross. The birds appear to have taken up permanent residence around the park’s pond. I have never seen so much duck poop in one place as I did there. We picked our way gingerly around until we found a nice-looking spot with a little brook in the background.

I had written up the facts I wanted to convey, and Dav and Brian positioned me where they wanted me and off we went. Suffice it to say that it can take quite a few takes to get what’s needed, even if you’re saying only a few lines. I kept flubbing it, or I’d get it right only to have a plane fly overhead, or a truck drive by, or a duck quack. But Dav got what he needed after about an hour and off they went.

Others who were filmed for the documentary included ex Guns n’ Roses guitarist Slash, as he’s a well-known snake fan (we had an interview with him in the February 1994 issue of REPTILES, to read the interview click here), Chad Brown, Brian Barczyk, Kathy Love, Brian Sharp, Brian Potter and other reptile folk. Also interviewed was Henry Lizardlover. Admittedly, I was a bit concerned about Henry’s involvement, as he seemed ripe to be portrayed as an eccentric reptile person typical of the average fan. Years ago REPTILES also interviewed Henry (yes, he did have his name legally changed to Lizardlover), and he would sometimes show up at the editorial offices with green iguanas in tow. He made a bit of a name for himself by posing his lizards and photographing them for a line of greeting cards. If you’ve seen cards that have a reclining iguana holding a guitar, those may have been some of Henry’s cards.

Eventually Dav sent me a DVD, and when I saw the finished film I thought he did a good job. I enjoyed Herpers. Maybe you would, too. You can visit the movie’s website, and purchase the DVD, here. Oddly, if you look at the movie’s entry on the Internet Movie Database, the “If you liked this movie you might like these movies, too” section includes the movies Jesus and I Married a Monster From Outer Space. I’m not sure what this indicates in regard to what the folks or the computer at IMDB thinks of reptile hobbyists, but you have to admit it’s food for thought.