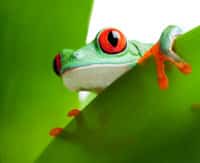 Red-eyed treefrogs have beauty beyond compare and continue to be favorites with frog fans around the world.

I noticed a comment asking for a blog about red-eyed treefrogs. So here you go! Don’t say I never take requests. Of course, your chances are much improved if it’s getting toward the end of the day and I find myself having to crank out a blog. It’s at times like that that my brain isn’t firing on all cylinders and does not stand up to the usual wracking I make it endure while I’m trying to come up with blog topics. But what the hey, red-eyed treefrogs are ultra-cool, so why NOT write about them, right?

We all know that much of the appeal of reptiles and amphibians is in their appearance. Let’s face it, many don’t exactly ooze personality. C’mon, you know it’s true! So put down that poison pen you were going to use to send me hate mail, emphasizing that your snake loves you and cherishes your company. I’m sure some reptiles come to associate their owners with food, and they may respond to the warmth of our bodies, too, but I’m afraid that I have yet to see proof of absolute affection. Of course, that’s just my opinion; maybe your pets really do love you.

As I was saying, herps are neat looking, and the more colorful they are, the more people like them. And when we’re talking colors, few exhibit the eye-stingingly beautiful colors of a vibrantly healthy red-eyed treefrog. With – yes, of course – their red eyes, as well as their green (and sometimes blue) bodies with blue and yellow dorsolateral coloration, and orange feet and toes, they look like a painting come to life. Colors this bright are usually meant to dissuade potential predators, and such is the case with Agalychnis callidryas. The frog will flash its colors when threatened, and some theories suggest that even its namesake red eyes are meant to give predators pause.

Red-eyes must be on the list of most-photographed herps (there is such a list, isn’t there?). Who wouldn’t look at a red-eyed treefrog and think how amazing it would look in a home vivarium, preferably a naturalistic one with plenty of live plants. Here’s the thing, though: Red-eyed treefrogs are indeed beautiful, and they can make very interesting pets, but if you expect yours to be ambling about your vivarium during the daytime displaying its beautiful red eyes while ambling about its enclosure, you will be disappointed. Red-eyes are primarily nocturnal, and they spend much of the day hunched up with their eyes closed, either stuck to the inside of a terrarium’s glass wall or hidden among its décor. This does not mean that you will never be able to observe your pet red-eyed treefrogs, however. You can watch them at night, when they’re active. They’re gangly frogs with long legs, giving away the fact that they are great jumpers. Adults typically reach about 3 inches in length.

Red-eyed treefrogs are not for beginners. They’re a bit delicate. Fire-bellied toads, also very beautiful, make a better beginner frog than a red-eye. Red-eyes have stringent environmental requirements, and they don’t respond well if they are not met. Being from the tropics of Central America, they need humidity. Glass-walled enclosures, naturally, offer the best option. At the same time, some ventilation is needed to provide fresh air. They are highly arboreal, so a vertically oriented enclosure works best. Like other animals, they require hiding places in order to live a stress-free life (I do this by hiding beneath my desk on occasion – it works). Broad-leafed plants and other vegetation can provide this, and the frogs will adhere to the undersides of leaves during the day. When they’re at rest they will use their hind legs to hide their side coloration, they will tuck their orange feet beneath them and close their eyes – this leaves only their green coloration visible, and that works well at camouflaging them among foliage.

Misting will help maintain humidity and so will the proper substrate. Sphagnum works well, as does coconut fiber or, for the less fancy-minded, moist paper towels. Red-eyed treefrogs do terrific when kept properly in naturalistic vivaria, but like many other herps they can also be kept in a basic enclosure, such as one with a paper-towel substrate, as long as their needs are met (humidity, hiding places, etc.). If necessary to help maintain humidity, you may need to cover a portion of the enclosure’s lid, if it’s screened, with plastic. Even though warm – around 75 to 80 degrees – and humid is the rule for the daytime, their enclosures can cool down at night.

Cleanliness is important when keeping any animal, but is doubly important when keeping amphibians. The absorbent skin of frogs, salamanders and their kin makes it easy for them to be affected by even slight pollutants. Always be sure their enclosures are clean, especially any standing water. Don’t let it become fouled by dirt, dead prey insects or excrement. Be very vigilant about cleanliness. Also, any water used with them should be treated to remove chlorine and chloramines. This can be done by treating the water, or letting it stand in an open container overnight before placing in the enclosure. Of course, bottled spring water could be used, too.

Red-eyed treefrogs will eat the standard feeder insect menu. Because they’re nocturnal, feed them at night. Vary the bug menu a bit to keep them interested, if necessary. Place crawling insects in a bowl; this makes it easier for the frogs to get at them. Otherwise the bugs could burrow into the substrate or hide elsewhere in the enclosure. Try to avoid giving them a chance to drown in standing water. If you don’t have an ethical crisis with the thought of it, removing the rear legs of live crickets will keep them in the bowl. Red-eyed treefrogs, due to their sticky feet and arboreal nature, should have no problem entering and exiting a deep bowl during dinnertime. Dust the insects occasionally with a vitamin/calcium supplement. Red-eyes might also eat smaller frogs, so keep that in mind if you are thinking about providing them with any tankmates.