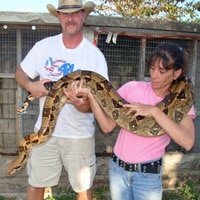 Pythons, politics and the death of the American Dream.

In a time of growing unemployment and economic uncertainty look at what our government is spending their time and our taxpayer dollars on. There is a bill in the U.S. Senate and a companion in the U.S. House that together embody the worst in American politics. Senate Bill 373 and House Bill 2811, aka “The Python Ban,” are politically driven bills designed to use the sensation surrounding feral Burmese pythons in the Everglades, and parlay it into billions of dollars in Everglades restoration funds, and serve as election payback to extreme special interests groups invested in ending the lucrative trade in high quality captive bred reptiles worldwide. The Burmese python has been the focus because of its ability to fire the imagination of the general public generating fear and misunderstanding. Quite simply, feral cats, feral hogs and water flow problems (real problems for the Everglades) don’t generate the interest that the sensational prospect of a giant snake in the Everglades does. See the article in the December issue of Playboy Magazine entitled “The Great South Florida Python Scare” by Pat Jordan. 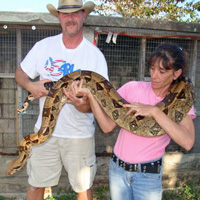 Andrew and Patti with a boa from Crutchfield Farms.

If passed as written these bills will destroy thousands of jobs bankrupting scores of American families. These bills have been couched as stopping the import of pythons in order to address invasive species issues, but the bills propose a listing on the Lacey Act that carries farther reaching implications. The listing would also stop the export and trade in high-quality captive-bred reptiles produced in the U.S. for more than 30 years. There are already more than 2 million boas and pythons currently in captivity in the U.S. representing a 3 billion dollar annual trade. Their value would be reduced to zero overnight with the passage of S. 373. S. 373 offers no compensation for these animals and makes absolutely no provision for their disposition.

The science has been “cherry picked” to support a predetermined end by using Burmese pythons in the Everglades as a poster child for a movement to shut down the trade of reptiles in the United States. A recent report from the United States Geological Survey (USGS) on large constricting snakes has been used as justification to stop the trade in nine species of snakes. The report has been characterized by an independent panel of scientists from the University of Florida, Texas A&M, Arizona State University and even the National Geographic Society as “unscientific” and “not a suitable basis for policy or regulation changes,” yet it has been characterized by the new Deputy Secretary of the United States Fish and Wildlife Service (USFWS) as justification for adding nine species to the Injurious Wildlife list of the Lacey Act – a designation formerly reserved for only the most dangerous of invasive species. The reptile industry is getting railroaded at taxpayer expense by ambitious politicians, poor science and powerful special interest groups. The proposed bills will do little to address actual problems and will wreck a vital part of the economy.

In a recent letter to the Senate Committee on Environment and Public Works, the U.S. Chamber of Commerce, the world’s largest business federation representing more than three million businesses and organizations of every size, sector, and region, opposes S. 373. According to the U.S. Chamber of Commerce, “if enacted in its current form, this legislation would adversely impact tens of thousands of businesses.”

Andrew Wyatt is the President of the United States Association of Reptile Keepers (USARK) and has been an avid herp enthusiast for more than 35 years. He has traveled the world and has had his animals featured in a number of television productions. For more information about USARK, click here .