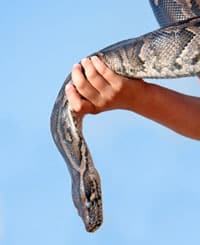 Two types of risks are associated with livestock management: occupational risk and public safety. They are completely separate issues. For the reptile industry, occupational risk is the risk posed to those individuals who work with and around reptiles (not the public), and public safety risk is that posed to the general public outside of the reptile keeper’s facility.

Unusually large snakes, venomous snakes and crocodilians do present a moderate occupational risk to their keepers. However, by any objective measure, the risk is no greater than that associated with other traditional livestock or pets. In recent years the animal-rights movement has waged an aggressive and sensational campaign to paint this occupational risk as an eminent threat to public safety. This is a false claim that confuses occupational hazard and public safety.

Seeking to ban private ownership, the animal-rights movement has lobbied in a number of states to pass legislation that would designate many reptiles as “inherently dangerous.” The reality is that there are other types of livestock and pets that have been demonstrated, statistically and historically, to be more dangerous to both keepers and to the public than reptiles. However, no proposal has been made to label other animals, including dogs, horses and other livestock, with the designation of “inherently dangerous,” even though annually they each injure and kill more people than do any reptile species.

This is just one example of the prejudice felt by segments of the public against reptiles. Some people are frightened of reptiles. There is no doubt that reptiles, particularly snakes, carry the baggage of cultural bias, irrational fear and misunderstanding. This is in spite of the fact that only about one person a year is killed in this country by a captive reptile as an occupational hazard compared to, say, the average 90 people a year killed by horses as an occupational hazard.

The United States Association of Reptile Keepers rejects the designation of “inherently dangerous” to describe any reptile. We understand that there are occupational risks involved in the captive husbandry of large snakes and venomous reptiles. It is the position of USARK that only experienced and serious keepers should work with these animals, and USARK has developed model legislation that can be enacted at the state level to ensure that keepers working with potentially dangerous reptiles adhere to strict caging standards, safety protocols, escape-prevention plans, registration and microchipping.

However, it is important to consider that there is no evidence to suggest that occupational risks are any greater than those associated with working with other traditional types of livestock or pets. Indeed, the measurable risk is less.