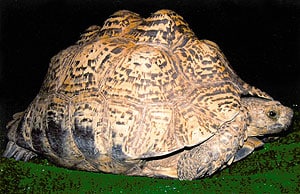 Pyramiding is one of the biggest problems associated with raising tortoises.

One of the biggest problems associated with raising captive-hatched tortoises is pyramiding. Pyramiding is the raising of scutes during active growth periods in tortoises. As a tortoise grows normally each scute increases in size horizontally thus increasing the overall diameter of each scute and the size of the tortoise. During normal growth this scute enlargement will lead to smooth growth. During periods of little or no growth (such as during brumation/hibernation) a slight ridge or ring will develop.

This ridge is often referred to as a growth ring and in some tortoise species can help to establish how old the tortoise is. In a tortoise that is developing pyramiding, this new growth increases the size of the scute in a vertical direction thus raising the scutes. This is not a normal process of growth or shell development. It has rarely been documented in wild tortoises.

Pyramiding doesn’t pose a problem for the tortoise unless dietary deficiencies are also present and have contributed to the pyramiding. Extreme pyramiding in an otherwise healthy tortoise can lessen the ability of a male tortoise to mount the female thereby hindering reproduction.

Scutes that have already exhibited pyramiding cannot be corrected; however, if conditions for shell development are corrected, the new growth can develop in a normal horizontal direction. It appears that the most critical time for pyramiding to develop is during the first year or two of a tortoise's life. If conditions are correct during the first year or two and pyramiding has not developed, then the chance of pyramiding developing in an older tortoise is greatly reduced even if husbandry conditions are not optimal.

For years there have been a number of opinions on the actual cause of pyramiding in tortoises. It had been pretty well assumed that excessive protein in the diet was the cause. Other factors including the ratio of calcium-to-phosphorus in the diet, temperature, access to natural light or UVB, dietary fiber and overfeeding were also cited as factors — most probably play a roll to one degree or another.

As husbandry techniques were improved the problem of pyramiding didn’t go away. Tortoises, of course, became much more healthy, and their survival in captivity was greatly enhanced. And the very grotesque pyramiding that we use to see became rare, but the “perfect” captive-raised tortoise was also elusive and rare.

The Protein Question and Pyramiding

As it became commonly accepted that protein was causing pyramiding in tortoises, so to did the idea that protein should be all but eliminated from the diet. To compound the problem, two different methods for determining protein were compared and often assumed to be the same.

One method of determining the percent of protein in a food item includes the water as a percentage of the food. The other method referred to as “dry matter” protein doesn’t include the water as part of the food. The results of the two methods are drastically different. By using the first method the percent of protein in dandelion greens is 2.7 percent. Using the “dry matter” method the same dandelion greens are 18.7 percent protein.

It is important to understand that protein is made up of amino acids, some of which are essential in the diet. As we begin to try and reduce the amount of protein in the diet, we must be very careful that we don’t eliminate the necessary amino acids.

Over the years I have tried all kinds of tortoise diets only to become more confused when there were no consistent results in eliminating pyramiding. I understood that the diet was extremely important in raising a healthy tortoise, but it didn’t seem to have a whole lot of affect on reducing pyramiding. About five or six years ago, my wife decided to try a new method for rearing hatching tortoises. 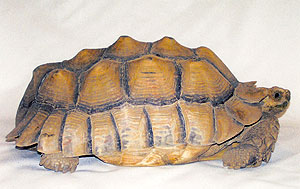 What caused the pyramidlike scutes on this sulcata’s carapace? Was it excessive protein in the diet, the ratio of calcium-to-phosphorus in the diet, temperature, access to natural light or UVB, dietary fiber, overfeeding or a combination of these factors? No one knows.

Within a few months the difference was astounding. The tortoises in the dry setup had the typical pyramiding we see in captive-hatched tortoises. The second group had no pyramiding whatsoever and looked identical to wild-caught tortoises. We began to try increasing the humidity on several other species of tortoises with the same positive results. 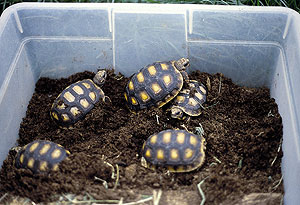 Another method the author uses to raise humidity is by using Canadian sphagnum peat moss for a substrate. These are some of the author’s red foots.

In January 2001 I presented my work at the International Turtle and Tortoise Symposium held in Vienna, Austria. I was excited to learn that many European tortoise breeders had come to the same conclusion and were beginning to raise hatchlings in an environment with more moisture.

In 2003 the University of Veterinary Medicine in Vienna (Austria) finally quantified the importance of humidity in the environment of hatching tortoises, and also showed in their research that high levels of protein had little affect on pyramiding. 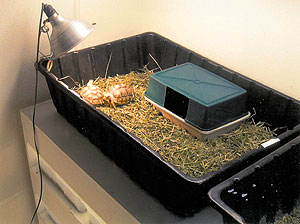 The author believes that pyramiding might be reduced in hatchlings through increased humidity. This is his tortoise setup, which includes a moisture chamber.

The researchers also hypothesized “that during dry conditions, dehydration reduces both intra- and inter-cellular pressures on soft cartilage at the areas of bone growth, which could lead to collapse of the soft tissue and subsequent ossification in the collapsed position.”

Other hobbyists in the United States have confirmed that increased humidity in their experiences plays a very important role in reducing pyramiding in hatchling tortoises.

My next goal was to devise a convenient way to raise a tortoise at high humidity without creating problems associated with increased levels of bacteria, fungi and mold. I have experimented with a number of different systems and substrates and have settled on the following system.

First, I’ve found that peat (sphagnum) moss works very well as a moisture-retaining substrate. It has a property that discourages the growth of molds and fungi. It also doesn’t seem to be toxic if ingested by the tortoise and doesn’t impact the gut if eaten. It is also readily available and relatively inexpensive. 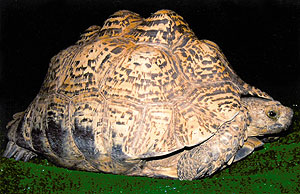 This leopard tortoise has a fairly common condition known as pyramiding, where the scutes raise up over time and take on a pyramid or tentlike appearance.

For years snake breeders and gecko breeders have used a “moisture chamber” for nesting and to maintain the health of their animals. I have taken the same approach with my hatchling tortoises. I provide a plastic shoebox with an entrance opening cut in the side. I put a 1- to 2-inch-deep layer of slightly moist peat moss inside the shoebox for the tortoises to hide in. The moist peat moss increases the humidity inside the box.

It is also important to provide a tortoise with: water, heat, UVB lighting and a well-balanced diet. The peat moss should be checked routinely for moisture level and regularly replaced with fresh peat moss.

After several years of using this system (moisture chamber), I have been able to consistently produce exceptionally nice captive-hatched tortoises. Under these conditions pyramiding can be eliminated, and my tortoises are active and healthy.

I am sure that there are many other methods that could be employed to increase the moisture and humidity for our hatching tortoises. This is one approach that can be used in your husbandry techniques that has been successful for me.