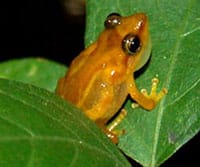 The Puerto Rican lowland coquí is one of the smallest treefrogs in the world.

The Puerto Rican lowland coquí (coqui llanero) frog of Puerto Rico has been listed as an endangered species by the U.S. Fish & Wildlife Service. The frog has been considered for federal protections since 2007, according to the Center for Biological Diversity, which issued a press release announcing the listing.

Approximately 615 acres of freshwater wetland has also been listed as critical habitat for the frog. The frog, one of 16 species found in Puerto Rico (Eleutherdactylus coquí are invasive in Hawaii) is about the size of a dime at around 15mm long and lives in wetland habitats in the Sebana Seca and Toa Baja area of the island.  These areas are current under threat by urban development, a go-kart track and a landfill. A 92 mile long natural gas pipeline is also considered a threat as the pipeline may affect the naturally occurring drainage of the wetland, according to the Center.

The more common coquí Eleutherdactylus coquí is a cultural symbol of Puerto Rico but is despised by most in Hawaii due to its loud mating call (listen to its mating call here), which sounds like "ko kee" and can exceed 90 decibels. The Puerto Rican lowland coquí though emits the highest sounding pitch of any of the coquí frogs, so high that it is barely audible to humans.