The Secretive Toad Headed Agama (P. mystaceus) is a unique Agamid species from desert regions of Asia and the Middle East.

This reptile doesn't even need a fancy introduction with "mystaceous" as a part of its scientific name. The Secret Toad Headed Agama, Phrynocephalus mystaceus, couldn't have a more fitting name. The agama lizard species from mysterious desert ranges is named for its secretive lifestyle, eccentric look, and bizarre methods of communication.

Toad Headed Agamas are endemic to the Middle East and certain regions of China. According to one scholarly study, 37 species are recognized under the lizard genus Phrynocephalus, but other sources list over 40 species under the Phrynocephalus genus! Each species is specific in habitat and lifestyles, and each needs more research to understand them for both Conservation and captivity. The Secret Toad Headed Agamas (P.mystaceous) are distributed throughout Central Asia, Northern Iran, and Afghanistan in steppes and deserts. 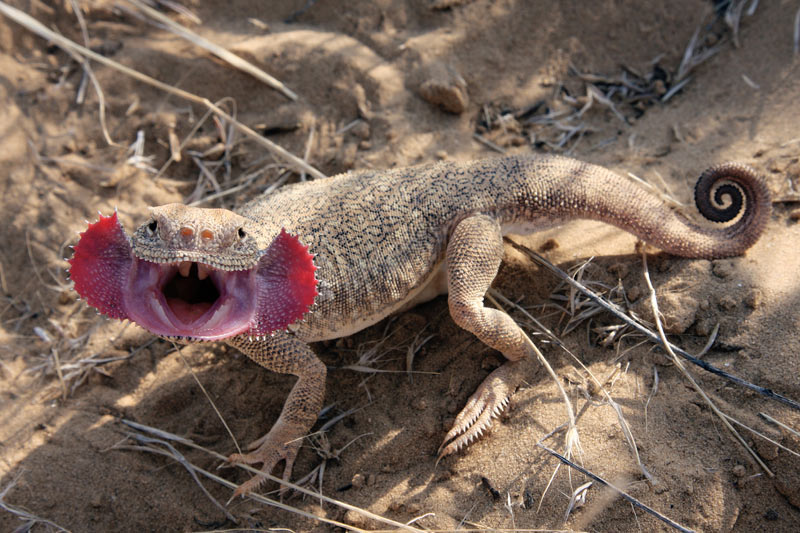 The Agamidae super family contains over 300 lizard species sometimes referred to as the "old world iguanids." Some of their defined characteristics include keeled scales, mid-dorsal crests, and throat flaps or fans. They are also distinguished by their teeth formations, which is a common classification system in animals and Zoology. The Agamids have Acrodont teeth, which is common in amphibians and fish. These teeth grow along the top of the jaw, and aren't very strong, and this is why they are able to lose teeth and regrow them so frequently!

Most other lizards have Pleurodont teeth, which are teeth that grow on the side and top of the jaw. They are a bit stronger than Acrodont teeth, but still not very strong compared to all the other teeth types. Another distinguishing fact about this genus is that Phrynocephalus are live-bearing, whereas the remaining agamids are oviparous (egg-layers)! This group of lizards is truly remarkable and unique.

The Toad Headed Agama has a rediculousl defense behavior!

The head flaps that distinguish this Agamid group are very apparent in the Secretive Toad Headed Agama when it shows territoriality and defense. The flaps are made of scales and on the inside is a bright pink color used as a warning. They do this to scare predators away, while also hissing. How often do you think it works!? Another unique behavior of the Secretive Toad Headed Agama is when they are in territorial disputes with other males (seemingly rare according to their barren desert habitats). They display a unique tail motion that mimics a scorpion to show dominance. It is also noted in a scholarly journal that, "the same tail movements are observed during agonistic contacts between individuals of the same sex and during male–female interactions, which is evidence for their signal (communicative) function." It seems that this agama, like many other reptiles, have adapted to very unique and flamboyant methods of communication. Perhaps this is needed in a seemingly lifeless, desert habitat.

When the Secretive Toad Headed Agamas aren't blasting out their faces or twirling their tails like a scorpion, they are being secretive! The lizards stay in deep burrows underground to help hide them from potential predators while thermo-regulating their body temps!

More research needs to be done on these interesting desert reptiles, so we can better understand how to preserve them. The IUCN currently lists three Toadheaded Agama Species as decreasing.