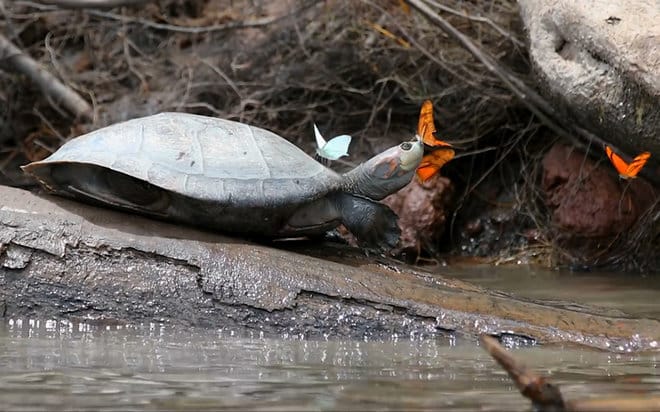 Butterflies Drink the Tears of Turtles in Stunning Video

When you think of butterflies, there may not be an immediate correlation to Reptiles, but they may have a more common relationship than previously tho

Looking for A Pet Reptile? Consider A Breeder

When you think of butterflies, there may not be an immediate correlation to Reptiles, but they may have a more common relationship than previously thought. The Lepidoptera group, which includes moths and butterflies, have adapted to exploit obscure sources of nutrition, like tears. Butterflies and other insects (like bees) have been documented sipping the tears of Reptiles, like Turtles and Crocodilians. According to this scholarly article, "adult Lepidoptera (butterflies and moths) of many species frequently visit moist ground, perspiration, tears, excrements, or animal carcasses to suck water and dissolved nutrients, a behavior conventionally termed `mud-puddling.'" To be even more specific, tear drinking is termed, "lachryphagous." This is required because their normal diets of flower nectar are lacking key nutrients and vitamins. This is deemed common in tropical regions for Butterfly and Moth species and it seems that these river Lepidopterans take full advantage of the coexisting river Turtles and Crocodilians.

Butterflies flock to sip the tears of Turtles in the Amazon!

This phenomena has been documented by multiple biologists and even normal people taking photos on vacation. Entomologist Phil Torres and others captured this stunning scenario during field work in the Peruvian Amazon while cruising the Tambopata River. At least 8 species of Butterflies were filmed and posted to his youtube channel sipping the tears off of the basking river Turtles, likely yellow-spotted sideneck turtles (Podocnemis unifilis) which have lost the adaptation to fully contract their heads into their shells. This could show how Amazonian Lepidopterans have evolutionarily targeted these Turtle's for their tears as a sodium source. The River Turtles are carnivorous, so their excrements are mineral rich with sodium, which the butterflies crave and need. In another scholarly article, it is documented that male butterflies are the ones who frequently forage for sodium compared to females. This is because male Lepidopterans offer spermatophores to females for mating, which is a capsule that contains proteins and sodium. The higher the sodium content, the more the spermatophores are accepted and favored by the females.

Butterflies and Bees have been documented favoring Caiman Tears in Costa Rica.

Reptile tear drinking could be a vital evolutionary adaptation to the Amazon butterflies and moths, which can be directly connected to specific reptile species, like the River Turtles. Female butterflies also forage for these nutrients, but it is much less common to see them doing so. According to the controlled experiment of the previously mentioned scholarly article, results suggested that "Butterflies exhibited species-specific preferences for feeding from different substrates." This means that they favor one source over the other, unique to each species. Could Rainforest Lepidopterans rely on the river turtles and other reptiles as their sole sodium source?

There is still much to be understood about this bizarre and beautiful behavior, especially relating to the effects it has on the Turtles and other Reptiles, like Caimans. Up to the current understanding, it is said to be a type of commensalism, which benefits one animal (butterflies) but does nothing for the other. Hopefully more research will help further understand this relationship and what it means for the Reptiles involved. Without a doubt, this phenomena is another example of the unique biodiversity of the Amazon and tropical rainforests, where two completely different species overlap for ecological balance.