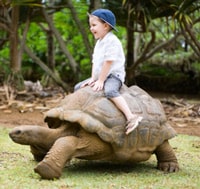 Reptile-loving kids these days are lucky.

Sometimes when I think back to when I was a kid, and how low-profile reptiles were back then, I can feel a little pang of jealousy for reptile-loving kids today. Kids who are into reptiles today have so many different venues that cater to their reptile interest. For one thing, there’s REPTILES magazine! That sure wasn’t on newsstands when I was little. There were no reptile magazines back then, not even The Vivarium, which came later. As far as the printed word went, I had to get my herp fix from the small Golden Guide called Reptiles and Amphibians. A bit later I remember the Pet Library Ltd. “Enjoy” series of books, which included titles such as Enjoy Your Turtle and Enjoy Your Newt. I had some of those and would re-read them constantly, even if I didn’t keep the animals that the books were about.

Reptiles were always present at zoos I visited as a kid, but not to the degree they are now. There were no reptile expos, either, certainly nothing that can compare to the large reptile shows we enjoy these days, all over the country. If the 8-year-old version of me had walked into the Daytona National Reptile Breeders Expo I would have been delirious with joy, probably running up and down the aisles and trying to peer into every deli cup and display case. Of course now it’s part of my job to attend them. If you had told me when I was little I’d have any kind of job associated with reptiles, I would have found it hard to believe. You never know how things will work out, that’s for sure!

I’m actually kidding when I say I feel a little jealous, because I’m actually very happy that kids today can see and interact with reptiles so easily, and that so many have learned to appreciate them and want to keep their own reptile pets. Sure, I’ll admit that this bodes well for future issues of REPTILES. After all, anyone in the reptile industry hopes that there will be enough interest in subsequent generations to keep our businesses alive. But apart from that, with all the reptile exposure children today can enjoy, they stand a much better chance at educating themselves properly in regard to reptile care, and the animals are the ones who benefit. Back when I was a junior herpkeeper I was groping around in the dark when it came to herp care. Nowadays, kids are much savvier and better able to provide the proper care for their reptile pets.

I attended just such a birthday party once, at Prehistoric Pets in Fountain Valley, Calif. Under the name JURASSICPARTIES.com, the staff there stages reptile birthday parties, and from what I can tell they are quite popular. At least the one I attended went over big. They will hold them either in the store, where there are special designated party areas, or they can send a reptile presenter to your house.

It was a friend’s son’s birthday and a big group of us gathered at Prehistoric Pets. Several rows of benches were set up and the kids parked themselves upon them. A presenter at the front of the room began showing off herp after herp, of all sizes and types. Bearded dragons and corn snakes, of course, were shown. I think I remember an African bullfrog. Suffice it to say there was no shortage of herps on parade. The presenter would show off the reptile and talk about it, taking it around to the kids on the benches and offering a close-up look and an opportunity to pet it. Each time the kids were practically falling over themselves trying to get near the reptile being shown. They were laughing and enjoying themselves thoroughly. Everyone behaved, too, and paid attention. You know you’re doing something right when a roomful of kids is riveted and paying attention. And, perhaps best of all, they learned some things about these fascinating animals.

The big moment came toward the end, when a large and mellow Burmese python was brought out – I think it was an albino — and the kids who wanted to could come up to the front of the room and stand shoulder to shoulder while holding the big snake. They LOVED that, and approximately 1,000,000,000,000 photos were taken. I think I still have retina burn from all the camera flashes.

Reptile birthday parties seem to be a burgeoning business, and I have seen an increasing number of advertisements for them in recent years. Like I said, all the kids at the one I attended had a great time, so this seems like something any parent with a child who is interested in reptiles may want to consider. Of course, you don’t have to limit such an event to a child’s birthday party – I’m sure reptile-loving adults would have just as much fun. I did!

Sure, I had fun at my birthday parties when I was a kid, too. But let’s face it, Pin the Tail on the Donkey can’t hold a candle to a Burmese python.