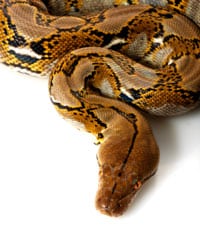 Own A Snake, Go To Jail?

Are your pet snakes about to become illegal?

As many of you know, there is a looming possibility that nine constrictors, including some very popular pet species, could be added to the Lacey Act’s list of injurious species. These nine snakes include the Burmese python, reticulated python, four anacondas, Boa constrictor and two African rock pythons. If this is news to you, review my past blogs and Andrew Wyatt’s “The Reptile Nation” blog, and you’ll soon be up to speed. The latest is that yesterday the Subcommittee on National Parks, Forests and Public Lands and the Subcommittee on Insular Affairs, Oceans and Wildlife held a joint oversight hearing on the situation regarding invasive species in the Everglades and the U.S. Fish and Wildlife proposed rule change that would add the above-mentioned snake to the Lacey Act’s list (at the time of this writing, I do not know the outcome of this joint hearing).

If these snakes are classified as injurious they will become illegal to import into or export from the U.S., and they will also be illegal to transport across state lines. This would be bad news, indeed, for the captive-bred reptile industry. If these snakes are listed as injurious species, it would become illegal for a breeder such as Bob Clark, who lives in Texas, to transport any of these snakes to sell at a reptile expo in Illinois. It would also prevent breeders such as Bob (and Brian Barczyk, Dave and Tracy Barker, Jay Brewer … take your pick) from shipping their captive-bred specimens of these species to out-of-state customers. Many professional reptile breeders have websites that they use to sell their animals online, and many specialize in these snakes. Such online-based businesses would likely be devastated if the snakes mentioned above are added to the Lacey Act’s list.

If breeders go out of business, think how that will affect the many reptile expos that take place around the country. They will be adversely affected, as well. The number of breeders with booths at the shows will go down, perhaps drastically enough that the shows themselves are discontinued or held less frequently.

With fewer shows and fewer breeders, not to mention fewer snakes on the market, it stands to reason there will be fewer pet snake owners. Reptile product manufacturers may therefore experience less demand for their products, pet stores may see fewer customers or receive fewer requests for snake-care products, and so on. That’s going to affect the bottom line of these businesses. As you can see, if these snakes are listed as injurious species, a domino effect will take place, with negative repercussions throughout many areas of the reptile industry. Of course, this isn’t exactly going to help our nation’s already beleaguered economy, either, and it will take yet another hit.

Since I’ve been reporting on S. 373, the bill that seeks to add the nine snakes to the Lacey list, worried snake owners have asked if their pet pythons are going to automatically become illegal for them to own. The answer to that question is no. The law that S. 373 seeks to foist upon the world by listing the snakes as injurious species is a federal one. As previously mentioned, it would make it illegal to import or export these snakes in the U.S., and it would be illegal to transport them across state lines. It would not, however, make it illegal to own them, at least where the federal law is concerned. So whatever you do, do not panic, and don’t immediately begin planning to get rid of your pet constrictors (and especially never consider releasing them into the wild; it’s non-indigenous species in the wild that have fueled this entire situation).

It is up to individual states to create their own laws governing the ownership of animals that are considered injurious. I contacted my own state’s governing entity in these matters, the California Department of Fish and Game, and was told that the Lacey Act generally does not affect intra-state possession or transportation of wildlife. As far as the nine constrictors in question, none of them, according to the person I was dealing with, are listed under Section 671 (the Importation, Transportation and Possession of Live Restricted Animals) of Title 14 of the California Code of Regulations. Therefore, as of now anyway, none of these snakes would be illegal to own in California, even if they are added to the Lacey Act list.

I don’t personally know of any state that automatically forbids the ownership of an animal only because it is on the Lacey Act list. Private pet owners, therefore, probably do not have to worry that they will be breaking the law if they own any of the constrictors that S. 373 seeks to add to the injurious list. If they are added to the list, local pet stores can still stock and sell the snakes, and local breeders can still breed them. They will only be able to sell to people in their home states, though. If any of these commercial activities involve any of these snakes being transported across state lines, then a federal law would be broken and people could get in trouble. That goes not just for businesspeople, but for pet owners, too. If you own a boa constrictor, and live in Massachusetts, for example, don’t take it with you when you drive over to visit friends in Connecticut.

If you own a Burmese python, retic, boa constrictor, anaconda or rock python, and you are worried about the legality of doing so should these animals be added to the injurious species list, contact your own state’s wildlife office. Ask them about laws as they pertain to the ownership of animals that are listed on the injurious species list of the Lacey Act. You may be able to set your mind at rest and not have to worry anymore that you might become a criminal simply for owning your pets.

Even if you do find out that you’re in the clear when it comes to owning your pet snakes, the industry as a whole would still suffer if the snakes are listed, for the reasons given. Be vigilant and aware of legislative efforts that could curtail your hobby. Never forget that there are powerful and organized groups that are against the keeping of pet reptiles and amphibians, period. If you want to protect your right to do so, oppose these groups and the anti-reptilekeeping legislation and politicians they support. Oppose them as reptile-loving individuals, as well as by supporting groups that are fighting the good fight on behalf of the reptile industry and hobby, groups such as PIJAC and USARK.