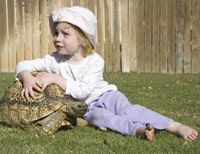 Tortoises do best when kept outside.

There are certain reptile species that people would love to keep, but maybe they aren’t always able to do so. At least conscientious herpers may not be able to do so. I’ve got tortoises in mind, and while there are hobbyists who are willing to cram a tortoise into a too-small indoor enclosure, others who know better realize an outdoor pen is really the way to go. Tortoises need a lot of roaming room, and standard indoor enclosures don’t provide enough. Remember, just because you may see a hatchling tortoise inside a display aquarium at a reptile expo, this does not mean that is the animal’s permanent home, and if it is, it won’t be for long. Outdoor pens provide the maximum amount of space for pet tortoises, and, of course, you don’t have to worry about them getting enough beneficial UVB if you keep them outside, because they’ll have constant access to natural sunlight (just be sure there’s a place for them to escape it, too). 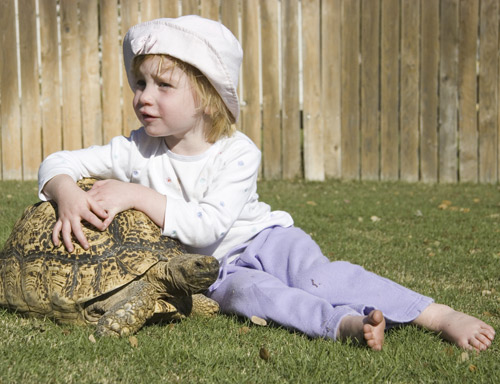 Of course, certain areas of the country are better suited for outdoor tortoise enclosures than others, but nearly anyone in the U.S. can set up an outdoor pen where tortoises may be kept for at least part of the year. During the winter months, depending on where the tortoise owner lives, the tortoises may need to be brought indoors, or at least in to a garage, where they may remain active or, possibly, where they may hibernate inside a box under a bunch of dried leaves or similar cover.

Weather permitting, though – and with spring on its way, it will start permitting – if you want to keep tortoises you should consider setting up an outdoor pen if at all possible. As for size, my usual recommendation applies here: make it as big as you can. Remember that male tortoises may fight, and larger pens with visual barriers such as bushes, rocks, etc., can help reduce fighting if you have no choice but to house two males in the same pen. Pens can be constructed with walls made of sturdy building materials such as cinderblocks (use cement to hold them together, otherwise you risk them tumbling down onto a tortoise pushing against the wall), or the walls may be made of wood. Whichever type of wall you use, plan on some pressure being exerted upon it from the tortoises. Be sure the walls are strong and resistant to pushing. If possible, it can be easier, and more escape proof, to incorporate one of the walls or fences that may surround your property, or even a wall of your house. 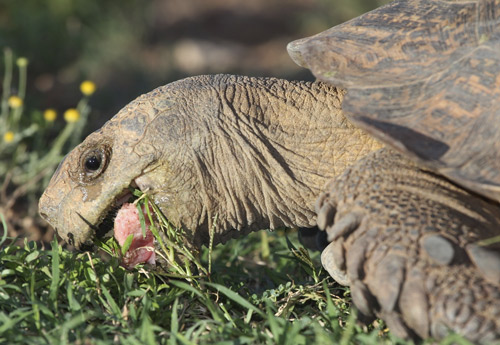 Also remember the digging capabilities of some tortoises. To combat digging, you can place wire screening beneath the ground within the pen, and sink the walls into the ground, as well (dig a trench and set them into it before shoring them up). Doing both should thwart even the most determined tortoise digger, but know that some tortoises, such as sulcatas, are world-class diggers, and very powerful ones, too. They can unearth entire underground sprinkler systems, so keep that in mind, too, when you’re deciding where to place a sulcata pen! Their burrows can be long and quite deep.

Sulcatas, aldabras and other giant tortoises will obviously need beefy reinforcements for their enclosures. They may not build up a fast head of steam prior to ramming a wall, but the slow and steady pressure they can exert is considerable. Smaller tortoises obviously would not be as much of a concern in this area, but, especially if you have several, don’t underestimate their power, either. They can sometimes use each other’s bodies for leverage, or they may even climb on top of each other in an effort to scale a pen’s wall. To help combat “over-the-wall” escapes, and the corners of enclosures are the most likely place for these to occur, attach a cover over the area where two walls meet to block tortoises from getting up and over. A lip around the entire perimeter wall wouldn’t hurt, or, if the size and shape of your enclosure allows it, a mesh cover with a sturdy wooden frame constructed to fit over the entire top will keep tortoises in and predators out. 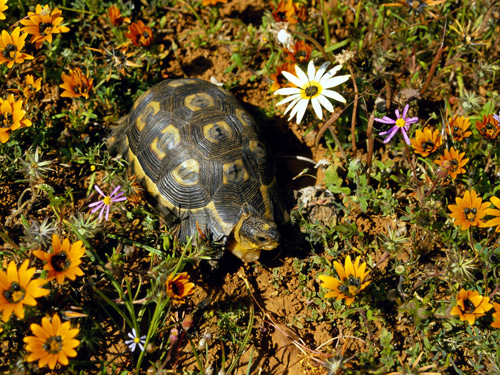 You can plant flowers and other plants in a tortoise pen, but be sure they are safe for tortoises to eat. Never treat any plant inside a tortoise pen with fertilizers or pesticides.

Locating a tortoise pen over a grassy area will allow the tortoises to graze, and you can plant different grasses (available at nurseries) for them to eat. You should still offer them healthy salads made of calcium-rich greens, such as collard, mustard and dandelion, but grass that is high in fiber is necessary to keep tortoises healthy, and it should be offered to them even if their pens aren’t planted with fresh samples. Some tortoise owners construct pens that are portable – they’re basically four joined walls that can be picked up and moved – placing them over a grassy area and leaving them there until the grass has been grazed away, then moving them to another grassy area to give the grass in the previous spot a chance to grow back. In addition to grasses, give tortoises hay, too, both timothy and alfalfa (not too much alfalfa), and flowers such as hibiscus. You don’t really need to offer tortoises fruit, unless you want to only rarely and in limited quantities as a treat. Too much fruit can cause diarrhea and that can lead to dehydration. Speaking of hydration, drinking water should always be available; in outdoor enclosures you can sink pans or plastic containers into the ground so their top edge is flush with the ground’s surface. They don’t need to be deep – only a few inches – but they should be large enough to allow tortoises to sit in them if they choose.

Tortoise pens should have shady areas, too, whether provided by some boards covering sections of the pen or via some natural means, such as an overhanging tree or bushes. Some keepers provide tortoise houses inside the pen, not only to provide a shady refuge during the day, but also a warm one during cooler weather and at night. This is a good place to provide supplemental heat for them, in the form of heat blankets or other heating elements. If you use ceramic heat emitters or similar devices, be sure the tortoises cannot come in contact with them. When situating a tortoise house, raising it up off the ground will prevent the inside from flooding in the event of rain. This can be done by placing the house on a raised frame with short legs, or on top of some bricks. The ramp leading up to the entrance should be secure and strong, and wide enough to allow the tortoises easy access to the entrance. Don’t make the ramp too steep, either – it’s not like the house needs to be raised 6 feet in the air, after all. The entrance to the house, too, should offer easy access for the tortoise(s). If you keep multiple tortoises, consider including more than one house in the pen. If you’re handy with tools you could build your own, or you could use a ready-made dog house. Dog houses make good tortoise houses, too! 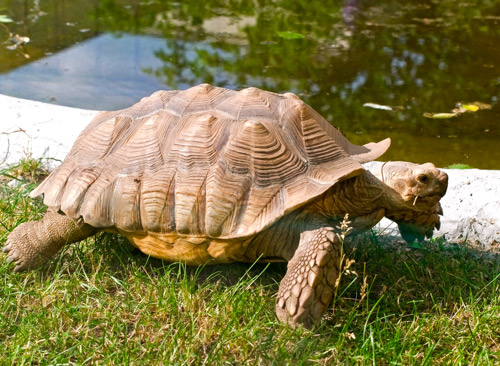 If you don’t go the tortoise-house route, other shelters that can be offered include large plastic tubs turned upside down with an entryway cut into one of their walls. Again, be sure the entrance is roomy enough to allow the tortoises to easily enter and exit. Otherwise you may see the container walking around the pen some day (but better that than down the street, I suppose).

No matter what the style – portable or permanent – you will do right by your tortoise to provide it with an outdoor pen. If the idea of constructing one interests you, but you’re not sure what type to build or you think it may be too daunting, go here for instructions on how to build a basic 8-foot-long pen that could house a few medium-sized tortoises (this plan would not apply to the giant types).

Some people who keep tortoises outside dispense with the pen altogether and let their tortoises roam freely in their yards. I’ve done this myself when I used to keep California desert tortoises, but to do so may invite risks. I’ve kept free-roaming tortoises twice. The first time there was never any problems. The second time, however, resulted in tragedy. Someone, and I still don’t know who, stepped on one of my tortoises and crushed its shell. I was away when it happened, and upon my return I found the poor tortoise’s dead body in my backyard. It had to have been either my yard guy, who proclaimed his innocence, or someone who came into my backyard to steal avocados off my avocado tree (such is the plight of a city dweller with an avocado tree; I now have a locking gate). Anyway, it’s harder to protect free-roaming tortoises from dangers. Obviously, you would not want to allow one in a backyard with a pool, unless there is a sturdy fence surrounding the pool. Also, if you own dogs, you won’t want them pestering your tortoise (or worse, injuring your tortoise). If you’re careful to “tortoise proof” your yard so that it is absolutely safe, and you and everyone else who may enter your yard is extremely careful about where they step (not to mention, where they mow), it may be OK to let your tortoise roam freely. But if you have the space for a pen, building one will take much of the worry and potential danger out of outdoor tortoisekeeping.

And what of the hobbyist who does not have a yard? Are pet tortoises automatically out of the question for such people? Not necessarily, though of course the giant types are (and let’s face it, giant tortoises should be out of the question for the majority of casual reptile hobbyists). While standard reptile enclosures may not offer a housing solution for most tortoises once they’ve grown much beyond the hatchling phase, apartment dwellers and others who lack a yard could consider building a tortoise table, which could be used for smaller types such as Greek tortoises and Russians (they can be used with box turtles, too).