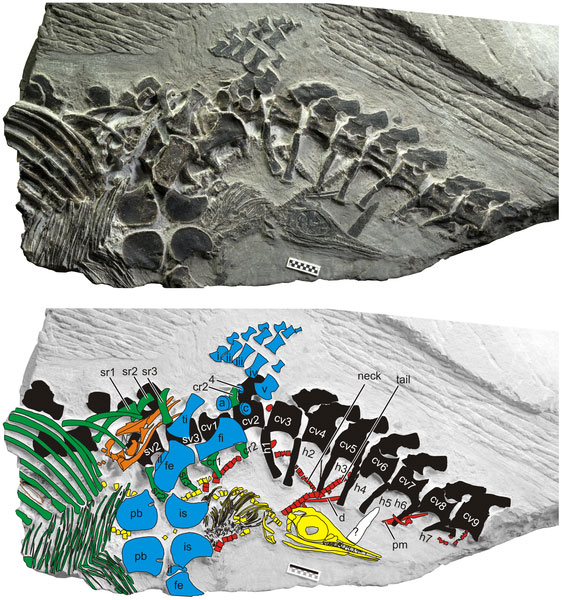 Chaohusaurus was in the midst of a live birthing when it perished.

Brazilian Scientists Discover World’s First Venomous Frogs
Man On Vacation In Hawaii Fined $1,500 For Harassing Sea Turtle And Touching Monk Seal
Massachusetts Students Get Involved In Blanding’s Turtle Conservation
University of California, Davis researcher Ryosuke Motani and colleagues have discovered what may be the oldest fossil of a reptile giving birth. According to their paper, "Terrestrial Origin of Viviparity in Mesozoic Marine Reptiles Indicated by Early Triassic Embryonic Fossils," the fossil that they discovered features the oldest fossil embryos of Mesozoic marine reptiles. They claim that the specimen is at least 10 million years older than previously discovered fossils. 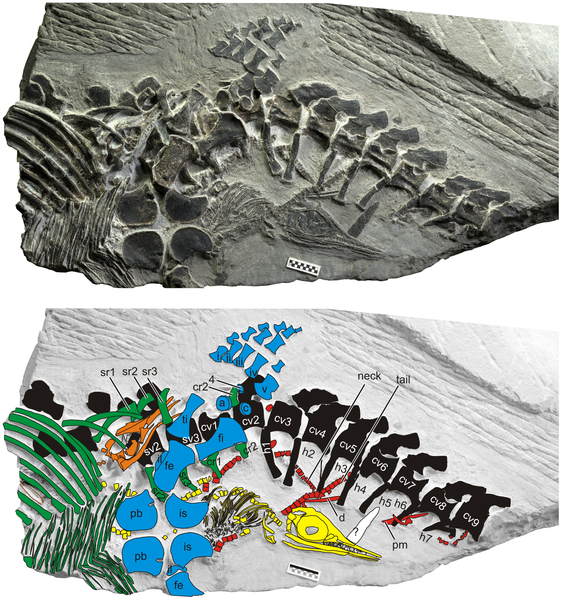 Image of the actual fossil and color coded reproduction detailing the find.

The fossil, a Chaohusaurus (Reptilia, Ichthyopterygia) features in striking detail the mother reptile in the middle of giving birth, with the embryo in the birth position with its skull emerging from the mother's pelvis. This, the researchers note, suggests a terrestrial origin of viviparity, meaning the birth probably took place on land and not in the water. A second embryo remained inside the mother while a third embryo was already outside the mother. 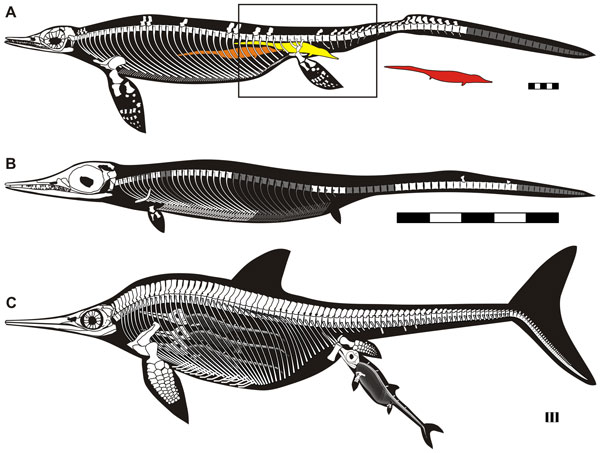 (A), Digital reconstruction of the adult Chaohusaurus based on two fossils found at the site. The rectangle details the elements of the specimen found in the mother Chaohusaurus . Colored silhouettes of embryo are placed in approximate positions of embryos 1 and 2, with embryo 3 displaced to avoid overlap with embryo 2.  (B), Chaohusaurus embryo. Elements in gray are missing. (C), the derived ichthyopterygian Stenopterygius with one embryo in birth position and three in body cavity, reconstructed based on SMNS 6293 (Staatliches Museum für Naturkunde, Stüttgart, Germany).

“The study reports the oldest vertebrate fossil to capture the ‘moment’ of live-birth, with a baby emerging from the pelvis of its mother,” Dr. Motani said in a statement.  “The 248-million-year old fossil of an ichthyosaur suggests that live-bearing evolved on land and not in the sea.”
Scientists say Ichthyosaurs were fast swimming marine reptiles that retained the appearance of the modern day dolphin but had fin-like limbs that probably enabled them to haul out onto land. The Chaohusaurus did not retain the dolphin-like appearance of later ichthyosaurs but rather looked like a marine lizard. It had fin-like limbs, a long neck and lacked the dorsal fin found on later ichthyosaurs.

Fossil Of Lizard That Ruled The World's Oceans Discovered In Jordan

Funding for the dig was came from the National Geographic Society Committee for Research and Exploration, National Natural Science Foundation of China , State Key Laboratory of Palaeobiology and Stratigraphy (Nanjing Institute of Geology and Palaeontology, CAS), Research Fund for the Doctoral Program of Higher Education to DJ (http://www.moe.edu.cn/) The full paper can be found here.
More Reptile Reading 1449