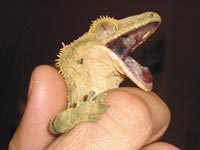 Supplement to the May 2008 REPTILES magazine article "When the Lights Go Out."

Ultraviolet light is often important for reptiles, so herps kept in UV darkness can develop problems. Some groups, such as lizards and chelonians, are more significantly affected than others, such as snakes. 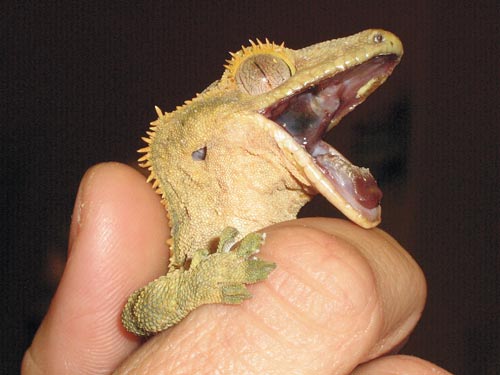 Herbivorous reptiles, especially fast-growing herbivorous lizards such as green iguanas (Iguana iguana), are most affected by the lack of UVB. Without proper full-spectrum lighting, these lizards often suffer from nutritional secondary hyperparathyroidism (NSHP).

A swollen, misshapen jaw is an early sign, and the lizard may appear to drag itself along with its belly touching the ground. As the disease progresses, bones may spontaneously fracture, and these fractures could distort the lizard’s spine, ribs or tail. Because broken bones are painful, often the lizard becomes reluctant to move. 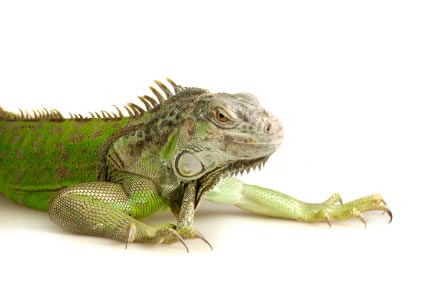 Green iguanas and many other lizards incur health problems if their environments lack ultraviolet light.

Bearded dragons (Pogona vitticeps) are omnivores, so technically, beardies should be less susceptible to NSHP, but this is not the case. The bearded dragon is another lizard species that grows very rapidly during its first year of life. Without the correct full-spectrum lighting, which includes UVB wavelengths, they also can suffer the ill effects of NSHP.

Another factor that may at least partially explain why NSHP may occur in an omnivorous lizard such as the beardie is temperature. These desert creatures require a focal basking spot of up to 115 degrees Fahrenheit and an ambient temperature range between 82 and 85 degrees. In my experience, many herpkeepers fail to maintain their pets at the correct temperatures, and they don’t provide proper full-spectrum lighting. Besides vitamin D3 synthesis being tied to UVB light, it is also temperature-dependent. If UV exposure is not optimal, and if the temperature of the lizard’s habitat is too low, you can see how these factors may interplay with the lizard’s calcium absorption and its development of NSHP.

Turtles and tortoises may also develop NSHP. Like it is with herbivorous lizards, fast-growing juvenile herbivorous tortoises are more likely to develop the disease.

Abnormal shell development is the most obvious sign in turtles and tortoises. The carapace may curve upwards around the edges, or the shell may appear more domed than that of normal conspecifics. Other abnormal shell findings include a soft shell, uneven shell surfaces, ventral convexity of the carapace or the shell may appear too small for the chelonian. Scutes may appear asymmetrical, and there may be pyramidical shell growth. Sometimes the chelonian’s upper beak may distort and appear more like a parrot’s beak, and the beak may overgrow. However, if the chelonian has developed a normal shell before NSHP development, the clinical signs may be much more subtle and difficult to discern.

Signs of NSHP also can vary by age. Normally, a hatchling tortoise should develop a firm shell by its first birthday after hatching. A soft shell in a yearling is a red flag that something may be wrong, so a trip to the local herp veterinarian is recommended. Adult chelonians may not be able to lift themselves up properly, so they appear to drag along the ground when walking. Adult males may also suffer a prolapsed penis as a result of NSHP.

Indoor setups for chelonians should include the proper heat gradient and a full-spectrum fluorescent light. This light should be changed at the appropriate intervals to ensure adequate UVB emissions. Hatchling chelonians offered a quality pellet food as a portion of the diet in addition to appropriate vegetables, grasses and hay, in my experience, grow and thrive, and they have fewer developmental abnormalities than those fed just grasses and veggies.

Diagnosis and treatment of NSHP in chelonians is no different than that for lizards. Additional problems arise for chelonians because they have a shell, which adds excess weight to their limbs, so weak bones may distort or fracture due to the stress. Also, an abnormally small shell may result in serious problems as the chelonian grows. The normal room for expansion isn’t allowed in these cases.

Snakes don’t have high UVB light requirements because they eat other animals. Vitamin D3 is stored in the liver of prey items, and snakes absorb the vitamin during digestion. As long as they consume suitable prey items that contain vitamin D3, they don’t need to synthesize it on a regular basis. Although some snakes appear to enjoy basking in sunlight, it is thought that this is more for the heat aspect than for vitamin D3 production.

However, snakes, especially diurnal species, benefit from the addition of UVA lighting, and UVB is not detrimental. Providing both light spectrums is fine.

Want to read the full story? Pick up the May 2008 issue of REPTILES today, or subscribe to get 12 months of articles just like this.