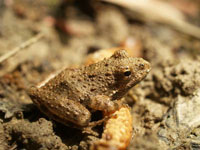 The Wildlife Conservation Society's (WCS's) Bronx and Queens Zoo animal experts have partnered with the New York State Department of Environmental Conservation (DEC) to uncover a mysterious threat that is causing a decline in northern cricket frogs (Acris crepitans), which is a tiny frog native to New York and other areas in the eastern United States. 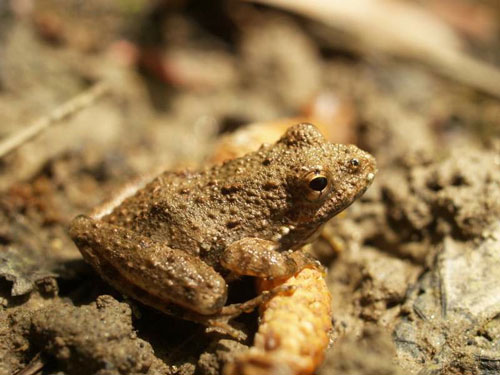 Cricket frogs are protected within New York State. They live in forests that have swamps, streams, lakes or ponds and can often be found in large groups on the banks of streams.

The WCS and DEC have reported a major decline in cricket frogs in New York State, with recorded locations of cricket frog populations within New York having dropped from 25 to only three or four over the last 10 years. The purpose of the DEC/WCS study, funded by State Wildlife Grants provided to the states through the U.S. Fish and Wildlife Service to conserve at-risk species, is to figure out exactly why the species is vanishing.

Multi-disciplinary approach to the problem

In order to determine the cause of the cricket frog loss, WCS pathology, herpetology and animal management staff are lending their expertise in surveys of cricket frogs and carrying out wildlife health assessments. Together with the DEC, WCS staff are working to rule out two common amphibian pathogens as a reason for the decline: amphibian chytrid fungus and rana virus.

The chytrid fungus causes a deadly skin disease that has been linked to the decline of a large number of different amphibian species around the world. It has caused a fall-off in frog populations through many part of the world including Australia, North and South America, Central America, New Zealand, Europe and Africa and is believed to be responsible for the extinction of numerous species of amphibians worldwide.

WCS experts test for these diseases by going into the field to collect swabs from the frogs and other area amphibians. The swabs are then brought to the Bronx Zoo's molecular diagnostics laboratory to test for the presence of disease.

There may be no simple answer

"As is often the case with amphibian species, there can be many potential explanations for the northern cricket frog's decline in New York," said Dr. Scott Silver, director and curator of the Queens Zoo. "By testing for disease pathogens we hope to eliminate disease as a reason for their population declines. Then we can continue to narrow down the list of possible causes until we discover why these guys are disappearing. We have a long way to go to figure out the answers to this mystery, but at least this is a first step."

Said NYSDEC Assistant Commissioner, Natural Resources, Christopher Amato, "Cricket frogs are an important component of New York's biological diversity and natural heritage, and it is our goal to ensure we continue to have them in our state for future generations. This scientific research will help us better understand one of the potential threats to the cricket frogs' survival. The Wildlife Conservation Society's continued involvement and leadership play an important role in helping to solve this mystery."