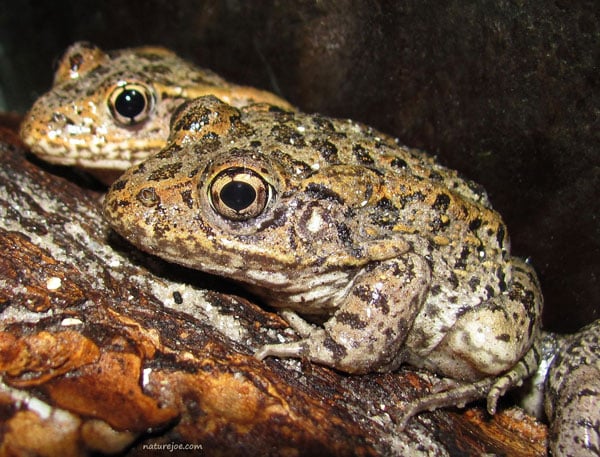 The Sandhills of Central and Western Florida are an incredible place to explore. . . and to "herp" for frogs! Very dry and scrubby, and

The Sandhills of Central and Western Florida are an incredible place to explore. . . and to "herp" for frogs! Very dry and scrubby, and too hot in the summer to spend any real length of time there when the sun is beating down, this, and the surrounding wetlands are a prime habitat for many of Florida's frogs and toads. Almost desert-like at times with Opuntia cactus and yucca plants, the sweet smell of several plant species fill the air as one wanders in search of amphibious life.

I live on the East Coast of Florida, in St. Augustine in fact, and after a week-long vacation and herping-venture to the other side of the state, it's almost like a whole different world over there. The East Coast is very flat, and the water table is quite high – in other words you can dig a hole almost anywhere and strike water within a few feet. The only real "hills" in the East region are right next to the ocean itself, and in most cases lacks the fresh water needed to support a real population of amphibians. Also the high water table makes it very difficult for the gopher tortoise to prosper. Only a few are seen here along road-cuts and other similar places, and the tortoise offers a perfect shelter for others who care to join it, and best of all, the tortoise doesn't seem to mind the company. 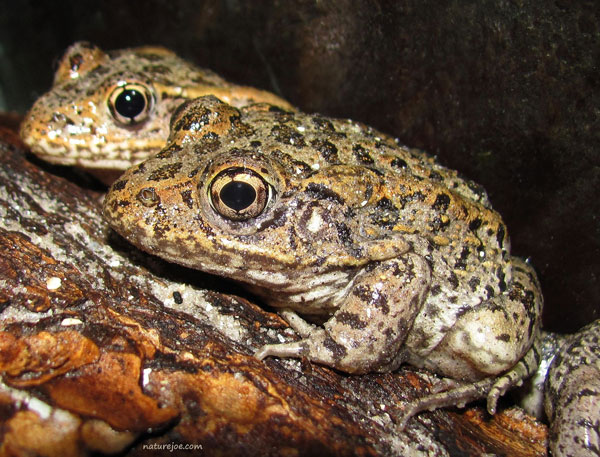 Sometimes several frogs will occupy a single burrow, and will even perch together in a small group just
beside it.

In the Sandhill region the ground is well-drained, and in the low areas the water often collects as large grassy marshes which fluctuate in depth during the year. Much amphibian breeding is done in these, and of course people live here too, and this provides the perfect habitat for other frogs as well by creating ponds, and dredging some of the marshes and adding fish. If seen from the air the dredged marshes look a bit like "donuts" with a ring of water around the edges, and a large grassy area in the middle. This is caused when they dredge, only scooping out what can be reached with the heavy equipment, and leaving the rest in the center to grow naturally. As the seasonal floods arrive the water fills up into the grass and the fish have a heyday, and have countless places for their young to prosper in the safety of the countless reeds.

During the dry seasons everything returns to the deep water, and I was told the bass can get pretty big. In these, the bullfrogs (Rana/Lithobates catesbeiana) abound, as well as the cricket frog (Acris gryllus dorsalis), since both species are quite content living and breeding among the fish. A note of interest concerning Florida bullfrogs. They are much different down here when compared to their northern cousins. The "Floridas" are very spotty in pattern, and are actually quite ornate. Vivid black leg bars and dark splotches totally cover the body, and even the face is spotted in most of them, while the ones "up North" are very plain in comparison. It's interesting though how the young Bullfrogs strongly resemble their northern look-alikes, but by their second year the spots begin to show.

With regard to the natural grassy marshes that have not been dredged and stocked for fishing, the variety of amphibian life is overwhelming. It's a common sight to see a pair of Sandhill cranes or a group of egrets all gathered for a leopard frog snack, or a water snake or Cottonmouth doing the same. At night everything from owls to raccoons all come for the feast. Leopard frogs in these areas must surely number in the thousands, and provide a very important food source for many native wildlife. Even the bullfrogs will dine on a leopard frog or two! Florida leopard frogs (Rana/Lithobates sphenocephala) live and breed in many kinds of water, and are very abundant in the Sandhills, but usually not straying too far from the grassy areas that border the marshes.

Recently my friend (Georges Huard) and I spent a week frogging the Sandhills and were amazed at the frogs and toads we saw, and during the warm wet September nights we would venture forth by day and by night, and there was never a dull moment, as frogs (and toads) were on all sides, and unlike St. Augustine, we encountered no Cuban treefrogs (Hyla septentrionalis), or two Rana species so common to the Northeast coast – namely R. c. clamitans, and R. heckscheri, but instead we encountered the Gray treefrog (Hyla chrysocelis) and the Florida gopher frog (Rana/Lithobates aesopus). The “gopher" is much more common than believed, but is seldom encountered. In dry weather they are never seen – even in prime habitat, but when the rains come and the ground is soaked they come forth in numbers, and will go to breed in the open grassy marshes. Their call is a deep "snore" much like that of the Northern leopard frog (Rana/Lithobates pipiens), but longer in duration with a faster trill.

When not breeding they seldom stray far from the burrows of the gopher tortoise, some of which are more than a mile from any known water. The best way to spot them is to go late in the day into an area where the tortoises have their holes and look for the frogs perched nearby. They usually sit two to four feet from the burrow, and when frightened will dive into the hole, but will re-emerge as darkness falls. Once it's dark they will forage near their hole, only to scurry back into it when they feel threatened.

Sometimes several frogs will occupy a single burrow, and will even perch together in a small group just beside it. During an onset of a storm, it's not too uncommon to hear the call of a male from just outside his chosen burrow, and sometimes this will set up a network of "croaking" as several males will call from just outside their holes, communicating. Also these are very difficult to collect, since they are very wary and will leap into the burrow and will be out of sight in a literal instant if approached, and the only way I have found to get close enough for a picture is to creep up upon the frog very slowly, feeding the mosquitoes and taking pictures as I do so. . .  and once it jumps the party's over at that hole, and it's off to the next one. Also the barking treefrog (Hyla gratiosa) was very much in abundance when I ventured over there on a warm April night, and was able to approach a few that were calling and got some video of the event.

Sadly the Sandhills are being destroyed at an alarming rate. Some offer high lofty views and are quickly snapped up by developers trying to make a quick buck and will plow everything in sight to build houses, but there are still plenty of farms and ranches, as well as preserves and parks in the area that protect this fragile environment, such as Potts Preserve near Inverness, with its huge variety of habitats – including plenty of sandhill areas. Wandering cattle and wild hogs do not seem to bother the gopher tortoise too much, but a housing development will. . .  and I guess I should have titled this "Preserving the Gopher tortoise,” since the holes seem to offer quick protection from the hot sun, frigid nights, and predators.

"Nature" Joe (Myers) is a nature photographer and works with groups of people of all ages in an outdoor educational setting since 1986, and can be followed on Facebook https://www.facebook.com/n.joe.myers where his nature photography can be seen publicly.