Spike, the 400 pound alligator has outgrown its enclosure at the PHS

Video: American Bullfrog’s Attempt To Snatch Dragonfly Off A Branch Ends In An Epic Fail
Differences Between Reptiles And Amphibians
Listen To John Clare Talk Tomato Frogs On The PetRadio Show

Spike, a 9-foot American alligator (Alligator mississippiensis) who was rescued in 2005 by law enforcement when he was five feet long, has outgrown his enclosure at the Phoenix Herpetological Society  and will soon be sent to a new home at a preserve in Florida. 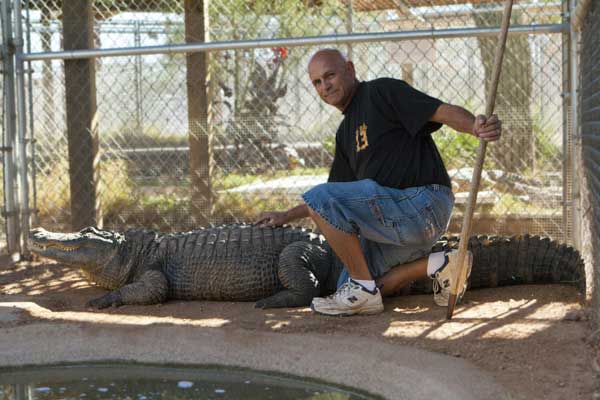 Spike was one of 32 reptiles that were seized by the police seven years ago when a trailer in which Spike was riding was stopped near the city of Casa Grande.

Before Spike will embark on his journey to the Florida preserve, PHS keepers will have to coax him into his specially built crate before he makes the road trip to Florida. The president of the PHS, Russ Johnson, and Curator Dan Marchand, who both have experience handling and crating alligators and other large reptiles, will drive Spike to Texas, where Spike's new keepers will meet him and take him the rest of the way to the Sunshine State.

“Spike has been a member of the PHS family and we are going to miss him, but he has outgrown his enclosure here,” Johnson said in a press statement. “He has two large females waiting for him, and will have plenty of room in a natural habitat in Florida. Saving reptiles is a major part of our mission and we are very happy for Spike.”

The non-profit Phoenix Herpetological Society rehabilitates rescued reptiles and educates people about reptiles. The society was founded in 2001 and operates its sanctuary on more than two acres of private land north of Scottsdale, Ariz. It houses close to 1,500 native and non-native reptiles. In November 2011, the society opened a venom room to the public, which houses 38 species of Crotalids, 13 species and two subspecies of Elapids, and 35 species of vipers. For more information on the PHS, please visit its website here.