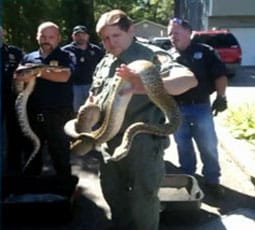 Man also cited for keeping two Burmese pythons, which are illegal to keep in Shirley, NY.

A Shirley, NY animal control officer has been charged with keeping more than 800 snakes, including two Burmese pythons, which are illegal to keep in the city, in his garage and for running an illegal business out of his house, according to media reports. Richard Parrinello, 44 was under investigation for allegedly working while on disability. According to news reports, investigators raided his home and discovered 850 snakes in a converted garage. Parrinello, who is cooperating with authorities, was apparently issued two violations by New York's Department of Environmental Conservation. He has worked off and on as the animal control officer in Brookhaven town since 1988.

According to Roy Gross, chief of the Suffolk County SPCA, the two pythons will be sent to a sanctuary oiut of state. No decision has been made on what to do with the remaining reptiles, which also included turtles and turtle eggs.  "I’d never seen so many snakes in one place before, even in a zoo,” Gross told the New York Post. "We were called in to see whether there was an animal cruelty or neglect [but] the animals appeared to be healthy and well-cared for,” he told the Post.