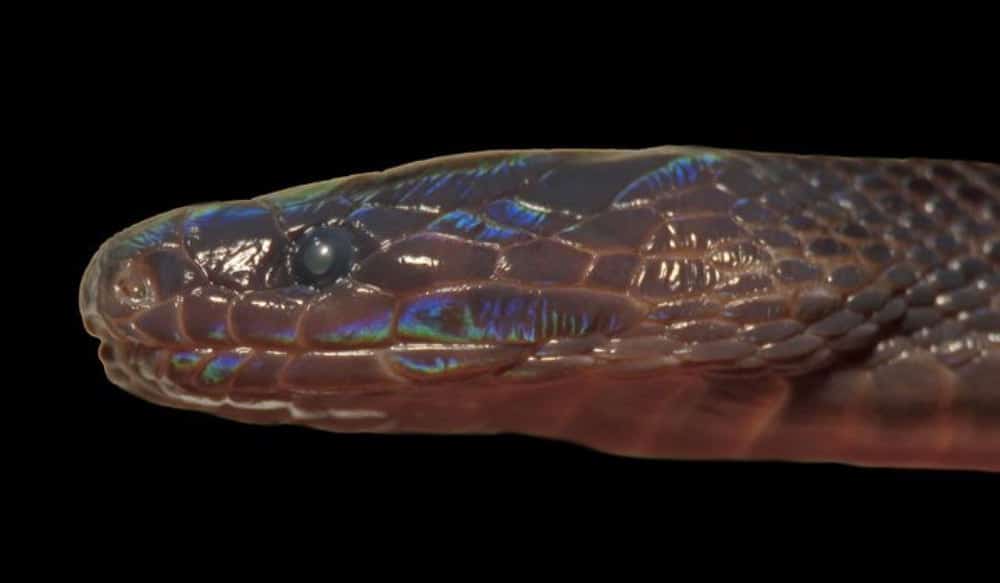 Smithsonian National Museum of Natural History researchers announced today that they have discovered and described a new species of burrowing snake from Vietnam’s Ha Giang province. The snake, Achalinus zugorum, named in honor of George Zug, the Smithsonian’s retired curator of reptiles and amphibians and his wife, Patricia Zug, is from a genus of snakes called Achalinus, or odd-scaled snakes. These snakes are known for their keeled, or ridged scales.

The species is a burrower, and thus has the odd scale pattern as well a dark iridescent coloration. It lacks the bright light photo receptors in the eyes which the researchers say makes it a burrower or a crawler through leaf litter on the forest floor. It also sports small scales and skin that is exposed between the scales rather than covered completely as with other snake species.

The researchers spent their evenings examining creeks and creek beds and hiking through the forests of Vietnam, surveying the reptiles and amphibians of the province when they came across Achalinus zugorum.

“In 22 years of surveying reptiles in Vietnam, I have collected only six odd-scaled snakes,” co-author Truong Nguyen, the vice director of the Institute for Ecology and Biological Resources at the Vietnam Academy of Science and Technology, told Smithsonian Magazine. “This is one of the most poorly studied groups of reptiles.”

Achalinus zugorum is a burrower, and thus has the odd scale pattern as well a dark iridescent coloration. Photo by Aryeh H. Miller, et.al.

The sample specimen was taken to the Smithsonian where its DNA was sequenced and confirmed to be a species new to science. It will then be sent back to Vietnam and cataloged.

The discovery of new species in Vietnam is happening at a rapid pace, which could pose challenges.

“It’s happening so quickly that we can’t keep up,” lead author Aryeh Miller, a research fellow at the Smithsonian’s National Museum of Natural History and a graduate student at Washington University in St Louis, told the Smithsonian. “Some of the species unique to this region are gone before they’re even described.” The scientists plan to continue surveying and searching for new species in the area, potentially inspiring protection strategies along the way. “The goal is to eventually find ways for the environment and people to coexist.”

The complete research paper, “Discovery of a New Species of Enigmatic Odd-Scaled Snake (Serpentes: Xenodermidae: Achalinus) from Ha Giang Province, Vietnam” can be read on the BioOne website.