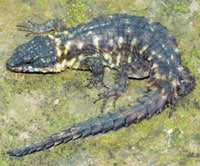 Innovative technique used for the first time to confirm identity of Cordylus marunguensis.

An international collaboration of scientists has announced the discovery of a new species of lizard from remote, war-torn mountains in Central Africa. The new species, known as Cordylus marunguensis, was found in the Marungu Plateau, a montane area west of Lake Tanganyika in southeastern Democratic Republic of the Congo.

The expedition that led to the discovery of this new species was led by Eli Greenbaum, assistant professor of evolutionary genetics at the University of Texas at El Paso, and Chifundera Kusamba, a research scientist from the Centre de Recherche en Sciences Naturelles in Congo. The team spent several weeks exploring the area around the plateau in search of new species of amphibians and reptiles.

The new lizard was found near the village of Pepa, under rocks in grassy fields that were riddled with landmines and unexploded ordnance left over from a heavy conflict that engulfed the region at the turn of the 21st century.

Digital Reconstruction Used
Suspecting the lizard represented a new species, Greenbaum sent DNA samples to Edward Stanley, a student at the American Museum of Natural History’s Richard Gilder Graduate School in New York City. Stanley compared the DNA of the Marungu lizard to similar species throughout Africa and confirmed that it was indeed a species previously unknown to science. He bolstered the finding by using a new technique called high resolution x-ray computer tomography to reconstruct the lizard’s skeleton in three dimensions. This is the first time that such a technique has been used in the description of a species of living lizard.

The digital reconstruction confirmed the presence of tiny bones called osteoderms in the heavily armored scales of the new species. The reinforced scales are thought to protect the lizards from attacks by predators, and in some cases, to allow the animals to avoid attacks by wedging themselves between small, rocky crevices.

The discovery of the new species offers hope for conservation, even though none of the lizard’s habitat is currently protected. "Although the Marungu Plateau has been heavily damaged by warfare and habitat destruction, the new lizard proves that it is not too late to implement conservation efforts," said Greenbaum. It is hoped that the new discovery will lead to the protection of the plateau’s unique plant and animal biodiversity in the near future.