A massive lizard that lived in the oceans 85 million years ago was an adept hunter, just as efficient at killing as modern day sharks,, according to scientists with Sweden's Lund University who discovered a fossil of Prognathodon, the top predator of the world's oceans during its time. The fossil, with near perfect outlines of its tail fin and flippers and with part of its soft tissue preserved, was discovered in central Jordan. The scientists’ findings were published in the journal Nature Communications. It lacked only the head and part of its tail. 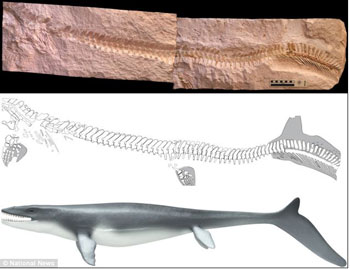 According to the scientists, the reptile, a member of the mosasaur family, used its tail fin (which resembles that of the modern day thresher shark) to propel itself underwater to capture a variety of prey. It apparently grew up to 17 meters in length and weighed as much as 20 tons.

The recently unearthed specimen was a juvenile, measuring just five feet in length. It was previously thought that mosasaurs were slow swimmers but the newly discovered fossil has a crescent-shaped tail fin that is similar to that of whales and ichthyosaurs, an extinct marine reptile that resembled dolphins. Dr Johan Lindgren of Lund University said that Prognathodon swam in a similar fashion to modern day sharks and called this "a finding that significantly expands our understanding of the level of aquatic adaptation achieved by these seagoing lizards."

Mosasaurs were very strong swimmers and breathed air. They lived during the Late Cretaceous Period and gave birth to live young in the ocean. They ranged in size from 3 meters in length (Carinodens belgicus) to more than 17.5 meters in length (Hainosaurus). There body was similar to that of today's monitor lizards but were streamlined for swimming.