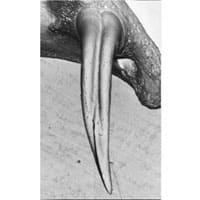 New Insights Into How Snakes Kill

Professor Leo von Hemmen, a biophysicist at the TU Muenchen, and Professor Bruce Young, a biologist at the University of Massachusetts, Lowell, have worked with snakes for many years, researching the sense of hearing in these reptiles. But a whole new field of discovery opened up unexpectedly when they started discussing how venomous snakes overcome their prey.

Contrary to popular belief, only about one-seventh of all venomous snakes, including rattlesnakes, actually inject venom into their victims' bodies by means of hollow fangs. Even though the vast majority of such reptiles lack this delivery system, they are still highly effective predators that rely on different methods to overcome their prey.

A typical member of this group is the mangrove pit viper (Boiga dendrophila). Using its twin fangs, it punches holes into the skin of its prey. The venom flows into the wound between the teeth and the tissue. But there is an even easier way: in many species, the fangs are simply shaped with a groove along which the venom flows, allowing it to enter directly into the wound.

Venom Characteristics
What puzzled the researchers was how this simple method could be so successful from a developmental perspective, considering that bird feathers, for example, should be able to brush away any venom flowing along an open groove. This then led the scientists to investigate the surface tension and viscosity of various snake venoms. The measurements that they obtained revealed snake venom is amazingly viscous. Its surface tension is high, about the same as that of water. As a result, the surface energy pulls the drops into the fang grooves, where they then spread out.

Over time, different species of snake have adapted to their respective preferred prey thanks to a combination of optimal fang groove geometry and venom viscosity. This means that snakes preying on birds have therefore developed deeper grooves to prevent the viscous venom from being brushed away by the plumage.

Similarities to Ketchup
The researchers also found an answer to the question of how snakes manage to ensure the venom flows well under the skin of their prey. After all, only there can it exert its deadly effect.

When a snake attacks, the fang grooves and the surrounding tissue form a canal. Acting rather like blotting paper, the victim’s tissue actually sucks the venom through this canal. Snake venom has a very special property to facilitate this effect. Just like ketchup, which becomes significantly more fluid upon shaking, the sheer forces that arise from the suction cause the venom to become less viscous, allowing it to flow through the canal quickly as a result of the surface tension.

Scientists refer to substances with these characteristics as non-Newtonian fluids. They have a very practical consequence for snakes. As long as there is no prey in sight, the venom in the groove remains viscous and sticky. When the snake strikes, however, the venom is then drawn to flow along the groove and into the wound.