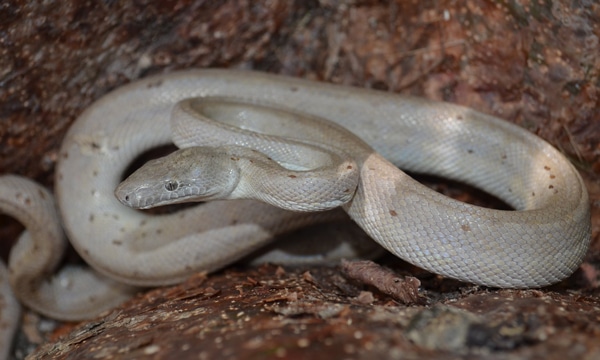 The Conception Bank silver boa lives in palm trees and feeds on birds.

Researchers from Harvard University in the United States have discovered and described a new species of boa that hails from a remote island in the Bahamas. The boa is unique in that it is silver in coloration and its name, the Conception Bank silver boa (Chilabothrus argentum) is a testament to its coloration. The first species discovered was found climbing a silver palm tree, so its coloration may be a form of camouflage. Another snake dropped onto the face of Dr. Graham Reynolds, lead researcher during the expedition, as he was sleeping on the forest floor.

Reynolds confirmed that the snake is indeed a new species based on a genetic analysis of tissue samples from the reptile.

“Graham Reynolds and his co-authors have not only discovered and described a new species of snake, but even more remarkable, a new species of boa. That’s rare, exciting, and newsworthy,” said Robert Henderson, a boa expert with the Milwaukee Museum of Natural History. “The beautiful Bahamian silver boa, already possibly critically endangered, reminds us that important discoveries are still waiting to be made.”

Chilabothrus argentum lives in trees and feeds primarily on birds.
Reynolds believes the snake should be considered critically endangered and should appear on the International Union for Conservation of Nature’s “Red List.”