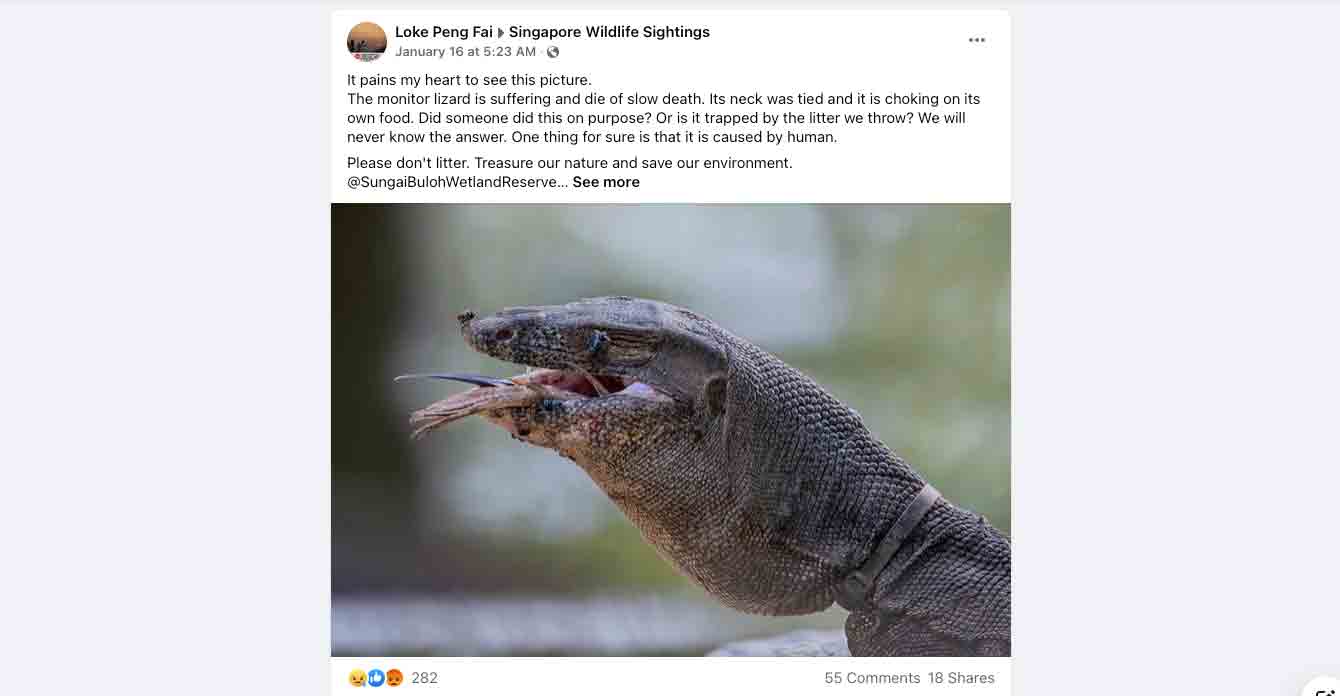 Monitor Lizard In Singapore Photographed With Zip Tie Around Neck

Singaporean wildlife authorities have been notified and are working to capture the large lizard.

An Asian water monitor has what appears to be a cable tie fastened around its neck, which could cause it to starve.

We ran an article in the January/February 2022 issue of REPTILES detailing how conservationists in South Africa worked together to capture a Nile monitor (Varanus niloticus) that had a plastic noose around his neck. After several days working together, the group was able to capture the large lizard and safely remove the plastic noose from its neck.

Singapore seems to have a very similar situation, this time with what appears to be an Asian water monitor (Varanus salvator). Facebook user Loke Peng Fai uploaded a photo and tagged Singapore Wildlife Sightings, in hopes to get the water monitor the help that it needs before it eventually perishes. It appears the water monitor has a large zip tie or cable tie fastened around its neck, which eventually may cause it to starve.

“It pains my heart to see this picture. The monitor lizard is suffering and die of slow death. Its neck was tied and it is choking on its own food. Did someone did this on purpose? Or is it trapped by the litter we throw? We will never know the answer. One thing for sure is that it is caused by human. Please don’t litter. Treasure our nature and save our environment.
@SungaiBulohWetlandReserve
Afternote:
Npark is informed. I understand that they are aware of this and trying to get to the lizard for sometime now but not successful.”

On Loke Peng Fai’s Facebook page, people are upset with what the image reveals, and rightfully so. One person said the cable tie looks like it was used by poachers to trap animals., while others hoped that Loke Peng Fai reported to authorities. They are aware. Let’s hope a positive outcome occurs with this beautiful lizard.