I found this reptile crawling around in one of Saddam Hussein's old ammunition bunkers.

I found this little guy (see photo) crawling around in one of Saddam Hussein's old ammunition bunkers. I have never seen a gecko like this.  It has no adhesive pads on its feet or claws, but it is a climber. It has a good disposition and is not aggressive. When I picked it up, it made a growling, chirping noise. Can you tell me what species it is? I'd like to name it if it hasn't been named yet.
Michael Garrett
Stationed at Camp Anaconda
Balad, Iraq

Your clear photos made IDing it a cinch. You found a bent-toed gecko of the genus Cyrtopodium. The genus is widespread over the entire Middle East. These geckos inhabit dry, rocky washes and bluffs, but some hide under flaking rocks or in shrubs out in open country.  Some species are also attracted to and live in and around structures built by humans. Underground bunkers likely provide cool, dark, slightly moister retreats that offer the lizards comfortable shelters by day. 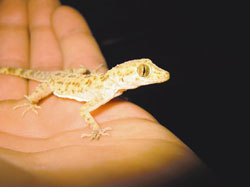 This Bent-Toed Gecko was found in Iraq

By the way, keying your hostage out beyond the genus would probably require having it in hand to check for specific nuances, such as whether the subcaudals are keeled or not, whether preanal pores are present and the presence of "nonmucronate trihedral or subtrihedral tubercles in the paravertebral row from occiput to level of vent." All fascinating details that you may wish to consult in The Lizards of Iran (1999) by Stephen C. Anderson – the text coming closest to covering Iraq's lizards that I could access – when you get home.

Take more close-ups of future herp finds, from all angles top and bottom, so they can be used for identification later. A clear view of the scalation of the groin region is especially important for differentiating  species.

Being able to compare the specimen to other similar species in a museum would also be a huge help. There are at least 35 described species. Unfortunately, your discovery is more than likely already among them. Thanks, though, for sending the pics and taking the time to share them with readers, who might be wondering what the herp life is like over there.