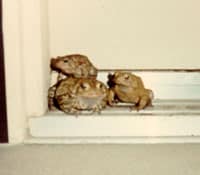 Memorable Herps From The Past

I remember starting out in herpkeeping with a fire-bellied toad that I named E.T. After that, I began catching toads, frogs and even a tiger salamander that I named Pearl. Through the summers I’d keep them in aquariums outside on our deck and in the garage. Much of my time was spent catching bugs for them all. For my largest bullfrogs, Frogarella and King Croak, I would go to a little lake in our neighborhood to catch small fish for them to eat. Along with a tiny net that I had, I would use things at the lake to trap them. I would herd the fish towards an abandoned shoe or cup and when they swam inside, I’d simply pick it up and pour it into a bucket. I could often be seen riding my bike through the neighborhood, carrying my bucket and net. When the temperature started to cool down by the beginning of fall, I would set my captives free in time for them to find a suitable place for hibernating during the winter.

My first reptilian pets were green and brown anoles. I used to enjoy watching the males bob their heads up and down and display their colorful dewlaps. I found them easy to tame and would often let one sit on the inside of a lampshade by the warm light bulb as I did homework at my desk.

Another herp that I had was a tokay gecko named Lagarto Mancha, which means spotted lizard in Spanish. This guy was a real challenge to tame at first. I had to use thick leather gloves because he was so quick to bite me. It took weeks for him to calm down and let me hold him without using the gloves. After that, he was very sweet and tame and never attacked me again. The one drawback was his very loud bark in the middle of the night. He would always wake me up with his barking. He was kept in my room and there was no way that I could sleep through that racket. Aside from that, he did help me in a way to prepare for my next big herp.

I’d been asking for a large lizard for a while, and by the time I entered junior high, my parents got me an green iguana for my birthday. I was so excited when I came home from school that day and they surprised me with him. He was young, but already around two feet in length and was housed in a 55-gallon aquarium. I named him Thor. I knew that he had to adjust to his new environment and was probably stressed, so I left him alone and was going to avoid handling him for at least that first day. My parents, on the other hand, could not avoid the temptation to touch him after I left the room. I was soon called back upstairs and saw the bloody results. Thor was scared, tried to get away and broke off his tail almost at the base. He was now less than a foot long! I was very upset by this, of course, but it was already done and there was nothing that could fix it. I recall my mom putting his fallen tail in the freezer for some reason unknown, as if it could be reattached by some black lizard magic at a later date. I don’t remember just how long it was in there, amongst the frozen veggies, but I still think about how strange the whole thing was. Thor’s wound eventually healed, and over the next few months and years it grew back. When he outgrew his cage, we built him a huge custom habitat from wood and Plexiglas. Later, he even had a small companion that lived with him — a hermit crab from the Virgin Islands named Reggae.

I had Thor until the summer before I went to college, when I began noticing that he was having some kind of muscle spasms in the toes on his hind feet, and then he started dragging his legs. We took him to an exotic animal vet who determined that he had a calcium deficiency. We started making many trips to the vet for calcium injections, but his legs became paralyzed anyway. By the time he was diagnosed and treated, it was too late to reverse the damage that was already done. He died shortly thereafter. Looking back after years of experience, it’s easier to see what I may have done differently, but I still don’t know the exact cause of what went wrong. He had the necessary lighting, vitamins and nutrients, etc., but there were other things that I probably didn’t know about back then. Now there are more sources of information available and a lot more advanced knowledge in herpkeeping as well. Although I was very sad at his passing, he gave me many years of joy and a lot of experience too. Thor was one of my most memorable lizards.

I am quite lucky to have enjoyed so many herps over the years and don’t regret any of my experiences, good or bad. I am a much better herpkeeper today because of them.