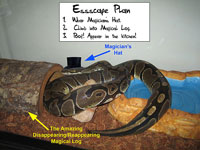 NARBC Show Tinley Park
In The Beginning, There Were Toads…
SEWERFest 2010

Today’s Topic: The snake. Nature’s escape artist. The Houdini of the animal kingdom.

Not a creature with more appendages can hope to surpass this limbless wonder’s natural talent at escaping almost any enclosure. Even Houdini himself had the advantage of arms and legs to assist in the amazing feats that he accomplished. Snakes, on the other hand (no pun intended), have no such advantages, yet it doesn’t seem to slow them down.

Not all snakes have this insatiable desire to find themselves free of their cages. My snake Damien, the red-tailed boa, is content to hang around, never looking for a way out. However, the other snake, my ball python Xiaoyu, does have this urge…

The Cage: A standard aquarium, with a sliding screen top that has a lock at both ends that could also be fitted with small padlocks if so desired. These original plastic locks lasted all of a few months, at the end of which, she had broken one of them completely off. Finding a replacement for this was no simple task, as they were not for sale either online or in stores. I finally got lucky in a local pet shop when I found one sitting loose on a shelf, I asked about it, and they just gave it to me. This newly installed snake-stopper did the trick.

So…Why did she escape? I forgot to close and lock the cage one night after feeding her, and I discovered the hard way that locks are completely useless if you don’t remember to use them! I was only alerted to the fact that she was missing early the next morning when I was suddenly awakened by my boyfriend, who was shouting things that cannot be repeated here. My first thought was, “Well, she’s 5 feet long and weighs 5 lbs, so it shouldn’t be too hard to find her.” Quickly looking where I believed to be “everywhere,” I ran out of time and had to go off to work. At this point, there was no sign of her, but I was determined that I would find her that evening.

Day One: Came and went. I gave up looking for her late that night and went to bed, deciding to let pythons be pythons and call it a day. The next morning’s search produced no results either. But this time I could see where she had been on her serpent safari. A few things were rearranged, a couple of potted plants had been knocked over and dirt was everywhere. Apparently, this conniving snake had a complete disregard for my stuff! And yet her random acts of violence on inanimate objects brought me no closer to apprehending her.

Day Two: I could clearly see that this destructive force in my condo had to be stopped. A whole new group of plants had met their untimely demise and this villain had to be brought to justice. That night after work, I went out for a couple of hours to give the perp time to show herself for her nightly rampage. I needed to make sure that I wasn’t gone too long though, or the effects of Snake War III would be evident. I arrived home, quietly letting myself in. I threw on the lights and there she was, on the coffee table, wrapped around a toad cage, peering inside at its inhabitants. Luckily I came home when I did, as a snake-on-toad crime was narrowly avoided. Now that I was finished playing “Crouching Herper, Hidden Serpent” I safely returned her to her cage and was ready for a good night’s sleep.

So where was she this whole time? I may never know for sure. It does kinda make me think…what else might be lurking, yet undiscovered in my condo?