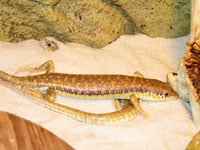 Click image to enlarge Schneider's skinks sailing in the seas of sand... At the age of 16, my first rea

American Toad
Invasion Of The Salad Toad
The Geckoland Gang

At the age of 16, my first real job was at a pet shop during the summer months. Before this I had only done odd jobs like babysitting and the occasional turtlesitting for a neighbor’s red-eared slider. Much of my job at the pet shop was cage cleaning work, but I enjoyed every minute of it because I was surrounded by what I love the most.

The pet shop was also where I learned first hand, the painful way, why you should be extra careful when petting a tarantula. I discovered this after petting one and then inadvertently touching my face. I had the poisonous tarantula hairs all over myself. Everywhere the hairs touched, it felt like I was on fire. My co-workers seemed to be pretty amused by this.

I was fortunate to be able to work with every inhabitant of the pet store, but my favorite jobs were always in the reptile section. I enjoyed caring for all the residents of this area, but had a favorite that I paid special attention to during every shift that I worked. It was a Schneider’s skink, and it was the friendliest lizard that I had ever encountered.

I handled the Schneider’s skink quite frequently and got to spend a lot of time with it. I would put it on my shoulder and it would crawl under the collar of my uniform and stay there for hours while I worked. Despite my intense desire to take my little friend home with me, I was in high school and lived with my parents, and already owned a large iguana, and an assortment of other pets. This included Spanky, the monstrous, screaming, laughing macaw that I had recently talked them into taking home from this very pet shop. So I was out of luck on this front.

More than a decade later, I had forgotten what species it was, but had always remembered what it looked like and how much I wanted one. I did some research and eventually figured it out, and began looking for them over the last few years. To this day, I have never seen one in any other pet shop. I continued to research them and even watched videos of them on the Internet, but still never found this elusive lizard.

Then, at the last reptile show I attended, I had finally tracked down my quarry! At the same seller’s table where I first encountered Mr. Munchy, I saw an entire container full of these beautiful, majestic creatures for which I had waited for such a long time. Because Schneider’s skinks are somewhat difficult to determine the sex of, the first step was to enlist the help of a knowledgeable breeder to assist me in finding a male/female pair. There would be no skink on skink crime here! Alas, my skinkly dreams had come true and the pair had been chosen.

My two new friends have been alert and friendly from the start, and weren’t even shy in the beginning at all. I have so much fun watching them as they swim through the sand and fly through the air in pursuit of crickets. They are like little acrobats in colorful shiny suits. In fact, I’m not entirely sure that I have not acquired myself some circus skinks by accident. They have a bright, orange checkered pattern down their backs and tails with shiny white underbellies. My boyfriend likes them as well, and jokes that their skin would make for excellent watch bands. This is NOT part of their future.

These little bundles of energy are quite athletic, just check out the video of one running in a hamster wheel. You probably wouldn’t have believed it without seeing it for yourself. I look forward to getting them a hamster wheel in the near future. Schneider’s skinks are also very neat and tidy, even picking up stray cricket legs after they are done eating. Being omnivorous, I also make them a salad two to three times a week, and because they eat a lot of the same greens as my uro’s, it’s pretty easy to prepare it for everyone at the same time. Always curious, I see their little heads pop up out of the sand whenever I open their cage to get them fresh water or food. At least one of them will walk right up to me and crawl into my hand and lick me.

So, if you can find this species (they are probably available online), they are a great addition to any herper’s collection, or as a great stand-alone pet. They’re personable, active during daylight hours, and arrive nearly pre-tamed from the start. Along with all of this, they do not reach a ridiculously large size or eat any exotic or hard to come by food. With this in mind, perhaps you will find yourself saying: Stop! Schneider Time!