“It was a big snake, but there was no way it could have swallowed that fawn.”

The snake was also wrapped around the fawn's legs, but not around its neck completely when he happened upon the encounter.

A man in Georgia was out in his backyard June 29 when he happened upon a whitetail fawn that was in the coils of a very large black rat snake (Pantherophis alleghaniensis). Mike Rupert happened upon the fawn after seeing a black rat snakeby his fence, and then saw the second, much larger black rat snake wrapped around the fawn. The fawn wasn’t moving and appeared dead, Rupert told the National Deer Association, which posted a photo that Rupert took on its Instagram page.

“I thought the fawn was dead, because it wasn’t moving,” Rupert said. “But finally I saw its chest move as it breathed. So, I got a stick and tried to pry the snake off. It was wrapped so tight, I couldn’t get the stick between the snake and the deer.”

The snake, according to Rupert, was also wrapped around the fawn’s legs, but not around its neck completely when he happened upon the encounter. When he went to pry the snake off the fawn, the fawn jumped up and was able to disentangle itself from the snake and ran away. 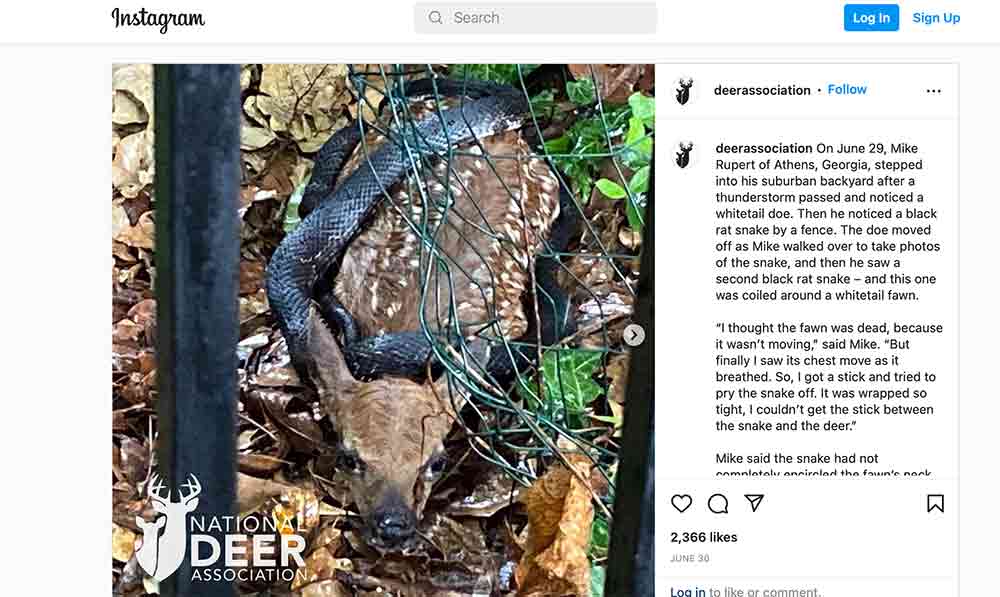 “It was a big snake, but there was no way it could have swallowed that fawn,” Rupert said. “The fawn was too big.”

Black rat snakes get large, and can grow to 7 feet in length. This particular specimen seems to have tried to eat more than it could swallow. But is is very peculiar that a rat snake would go after a fawn.