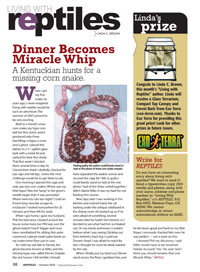 One editor's top-five "Living With Reptiles" stories for 2009.

In the Sept. 4 blog, I briefly described how I fit into this magazine. I talk to people for news stories, retailer profiles and contests, but that’s not all. Some of you might have gathered from the Sept. 9 blog that I take show pictures, too. It’s true, but I’m not the only one. I also edit and help magazine contributors with their writing, and my favorite place to do that is in the “Living With Reptiles” column.

Found in the very back of the magazine, this column is the last hooray of every issue. It’s like the exclamation point to an expressive sentence or the Friday to the regular workweek. It’s one of my favorite columns if you can’t tell.

Readers like you write these stories, and there never seems to be a shortage of good submissions to choose from, which is sometimes tough for REPTILES magazine editors because we can only select 12 a year. But I’m getting off point. The truth of the matter is it never ceases to amaze me how many ways herps can touch people’s lives, and some of our readers do a great job of putting that into words.

So in the spirit of sharing, below are my top five “Living With Reptiles” stories of this year. Those of you who would like to share your favorites, please do. And anyone interested in submitting stories for the column can find instructions on this website.

That does it for me, folks. Russ will be back at the end of the week, so my short stay on the blogosphere is over. Take care, and keep reading.