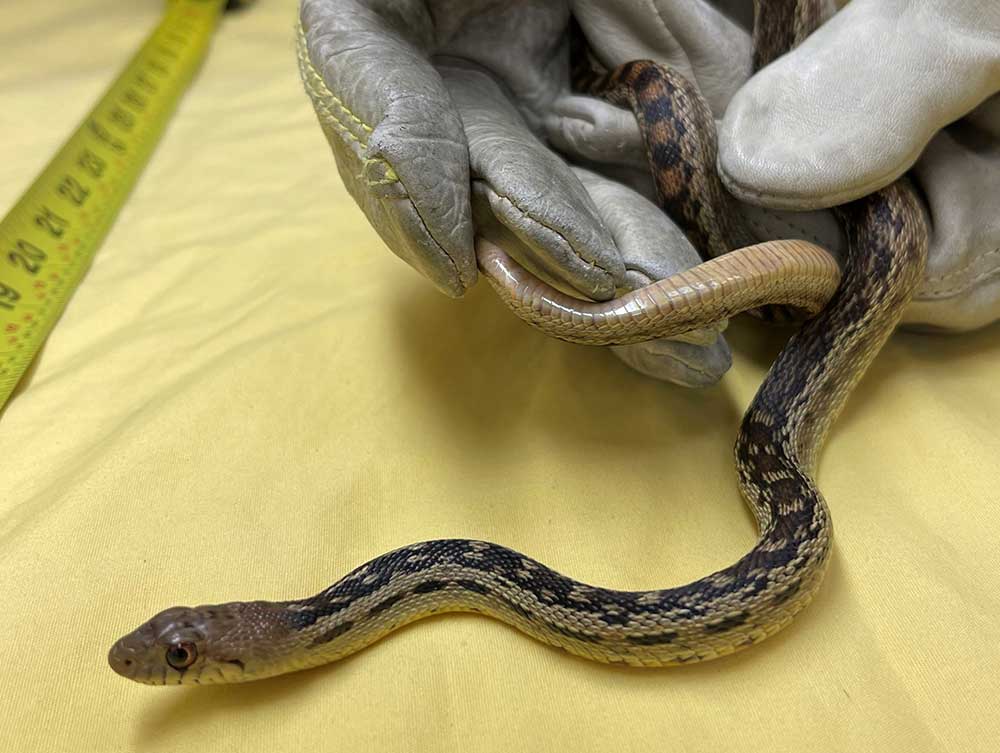 The state has programs to keep snakes out of the islands and possession of them is illegal. Photo by HDOA

The snake was found on a pallet in a shipping container of mixed goods.

There are no native snake species on any of the Hawaiian Islands.

A gopher snake (Pituophis sp.) was captured alive at a Home Depot in Hawaii by Honolulu Police Department officers, according to a news release put out by the State of Hawaii Department of Agriculture (HDOA). There are no native snake species on any of the Hawaiian Islands.

Employees with Home Depot in Kapolei, a town west of Waikiki, called the police around 11 p.m. to inform them a snake was on the premises, and officers arrived, using a bucket to capture the reptile.

It was found on a pallet in a shipping container of mixed goods, according to the HDOA. Agricultural inspectors took possession of the animal at the Kapolei Police Station, which will determine where the snake will go.

The juvenile gopher snake measured about 21 inches in length and appears to be a stowaway. Keeping snakes is illegal in the state and possession or transporting illegal animals is a class C felony in the state. Fines are $200,000 and up to three years in prison. The state has an amnesty program for those in possession of snakes. they can be turned in to any Humane Society, the Honolulu Zoo or the Panaewa Zoo on the Big Island.

The gopher snake grows to about 3 to 6 feet in length, with an average length of 4 to 5 feet. They are a heavy bodied snake that can live 15+ years in captivity. They are native to North America. Gopher snakes belong to the genus Pituophis. This genus includes gopher snakes, pine snakes and bullsnakes. The gopher snake is widely captive-bred and is a popular snake among reptile keepers. A variety of morphs are widely available.