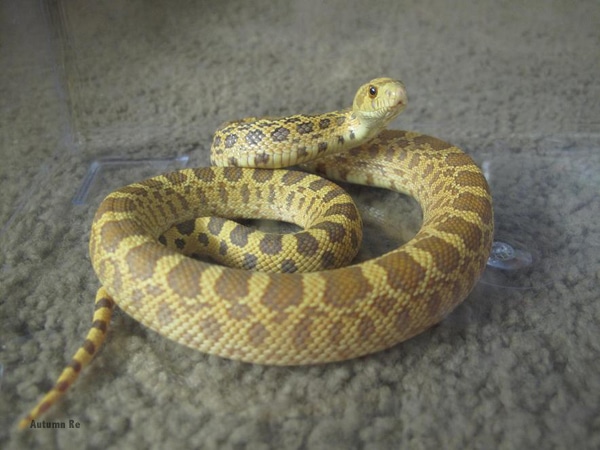 Gopher snakes are active during the day, they’re very curious and enjoy investigating new things in their enclosures.

Updated January 30, 2023 Gopher snake (Pituophis spp.) Gopher snakes are the classic wild snake that many of us grew up around, their wide range

Gopher snakes are the classic wild snake that many of us grew up around, their wide range is a testament to just how adaptable they are. We have several types living throughout North America (The largest of which, the bull snake, is often incorrectly regarded as a separate species) but they’re all nonvenomous, ground-dwelling constrictors of a similar appearance. They’re very hardy and forgiving captives with minimal requirements, but it’s their bold and curious mind that makes them so popular with hobbyists. With proper reptile products and care, these snakes can thrive in captivity.

Gopher snakes are very common and although most of us can probably find them in our own backyard, prioritizing reptile health & wellness by purchasing a captive bred animal who’s already known to be healthy and feeding is better for all parties involved. They’re easy to find in reptile classifieds and prices for gopher snakes, even those of various color and pattern variations, stay relatively low. 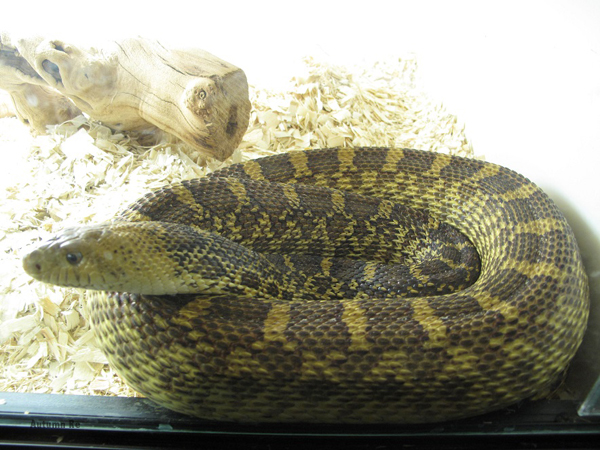 Gopher snakes are common throughout much of the United States.

Special regulations may apply if they are a native species in your state, so be sure to check your local laws before obtaining one.

Gopher snakes are heavy-bodied and are already around a foot in length when they hatch. Adult size varies between subspecies, with four to five feet being average, but large individuals, especially bulls, can easily reach six feet.

Fifteen years is average, but exceptional animals have been known to live up to 30 years of age. They show few signs of aging and can breed well in to their teens.

Gopher snakes are escape artists and require a very secure enclosure. Rack system tubs suit them just as well as reptile terrariums since floor space is more important to them than height. Hatchlings can be started in six quart tubs or five gallon tanks, but will have to be upgraded within a few months. A 20 gallon long tank or 28 quart tub works well for growing snakes. Smaller animals can live in 41 quart tubs or 30 gallon tanks as adults, but larger ones do best in enclosures that are four feet in length. Being so active, they require slightly more space than some other similar sized snakes, but they will use any extra room you give them and can be great display animals! 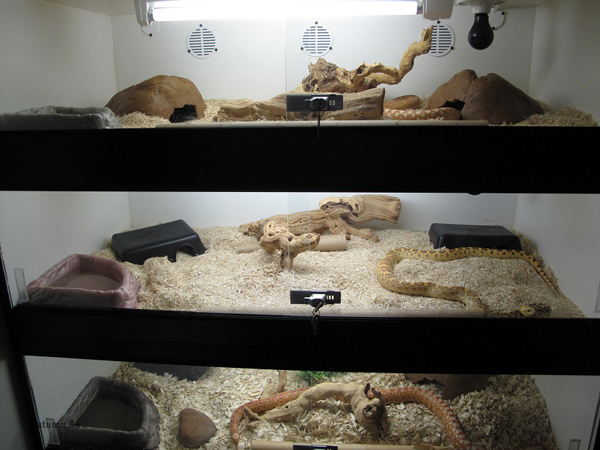 All sorts of substrate can be used. Gopher snakes enjoy burrowing and are happiest with a thick layer of loose particle bedding. Aspen bedding works best, and you can also give your snake tubes to slither through provided they’re wide enough and made of a safe material. Steer clear of oily, odorous woods such as pine or cedar.

Gopher snakes don’t require any special UVB or UVA lighting, but the amount of light they perceive can affect their feeding and breeding responses. A snake who sees outside light from a window will notice when the days grow shorter and may stop eating to prepare for the oncoming winter. This type of cycling is beneficial if you want to breed them in the spring, but otherwise can be avoided by giving them at least twelve hours of light each day. Using a timer makes this easier.

Keep in mind that your snake is cold-blooded and has to physically move itself to a colder or warmer area in order to regulate its body temperature, so it’s important that you provide it with varying spots to choose from. This is best done with reptile accessories such as a heat pad.

Fresh, non-chlorinated drinking water should be provided at all times. The dish should be large enough for them to soak in and heavy enough to prevent them from knocking it over. 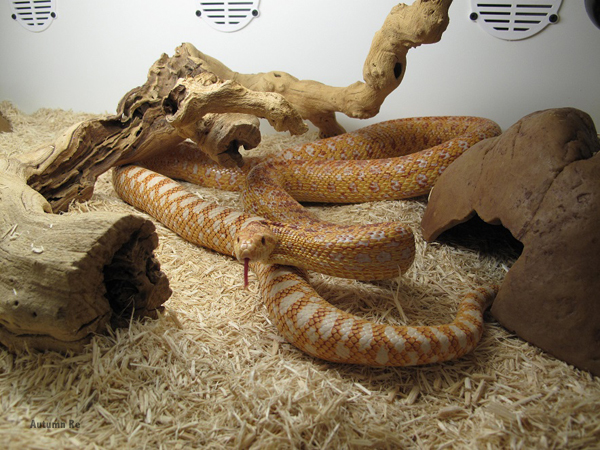 Provide a nice hide for your gopher snake. Photo by Autumn Re

Gopher snakes like it relatively dry and shouldn’t require any added humidity until they begin their shed cycle. A snake in shed will become reclusive, and their scales will turn cloudy and dull. Once you notice this, provide your snake with a humid hide box filled with damp paper towels or moss. Periodically spray inside with mister to keep it moist until they’re finished sloughing off their old skin.

These snakes are known for their voracious appetite and will eat almost anything, so care should be taken to avoid overfeeding. Offer prey just once a week. Appropriate sized prey is the same size as or slightly larger than the widest part of their body. Hatchlings start with mice, but will take rats as adults, and you can find both types of feeders online or in most pet stores. I advocate buying frozen since live rodents may bite or injure your snake. The majority of gophers don’t hesitate to devour thawed prey, even for their first meal!

Don’t give up if your snake is refusing, just leave it alone for a few days before offering food again. Snakes that are shyer might prefer you to leave the prey in front of their hide box and let them in find it themselves, but most snakes can be tricked in to striking when you wiggle the prey around using tongs.

Gopher snakes are active during the day, they’re very curious and enjoy investigating new things in their enclosures. In general, most are perfectly docile and allow themselves to be handled without a fuss. Those that do protest however, do so very loudly thanks to their epiglottal keel, a special throat flap which vibrates upon exhalation. The hiss produced – along with the way they lift their body up high, flatten their head out in to a triangular shape, and rattle their tail against the ground – is all part of their great act to fool you in to mistaking them for a dangerous rattle snake. Should you call their bluff and pick them up, most switch tactics and focus instead on releasing a foul-smelling musk while fleeing. Gophers rarely bite in defense, although they do have small teeth and are capable. Hatchlings especially can be nippy, but regular handling calms most snakes over time.

They tend to remain active when held, but you can keep them in place by switching your hands underneath them as they go. Be sure to support their weight for them as they aren’t always the best climbers, and avoid handling them while they’re in shed or after they’ve just eaten a meal.

They usually learn to trust people over time and most aren’t shy about exploring your world or demanding food. That behavior is what makes gopher snakes one of the most engaging snakes to keep!

Snake breeder Autumn Re has always had a passion for reptiles, especially North American colubrids, and volunteers heavily in public education programs for their welfare.