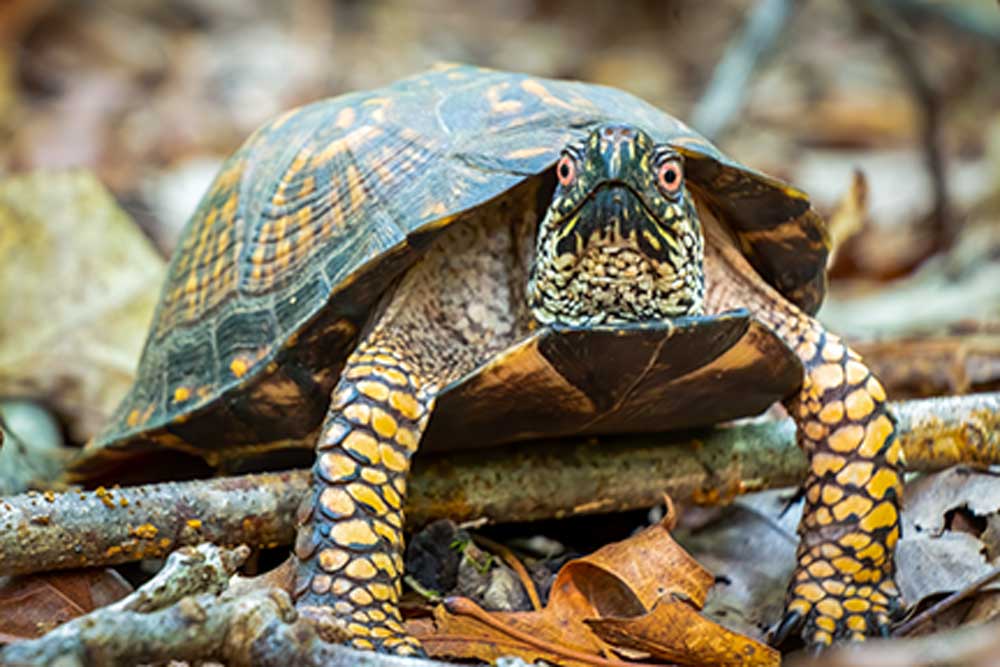 The Eastern box turtle is listed as vulnerable by the IUCN.

The USFWS received tips from Pennsylvania and West Virginia wildlife officers that the man was selling and trafficking turtles in interstate commerce.

Christopher Cool had 246 Eastern box turtles in his possession with the intent to sell and ship the turtles outside Kentucky.

A Kentucky man has pleaded guilty to a single count of violating the Lacey Act and was sentenced March 18 to 15 months in federal prison. Christopher Cool, 59 had 246 Eastern box turtles (Terrapene carolina carolina) in his possession with the intent to sell and ship the turtles outside his home state of Kentucky. The turtles were discovered at his residence by the Kentucky Department of Fish and Wildlife and the United States Fish and Wildlife Service.

“The Lacey Act is an important tool for preserving our valuable wildlife resources,” Carlton S. Shier, IV, United States Attorney for the Eastern District of Kentucky, said in a release put out by the U.S. Attorney’s office.  “We appreciate the hard work and dedication of our law enforcement partners, both state and federal, without whom this prosecution could not have been possible and this threat to protected wildlife could have continued.”

The commercial sale of these reptiles is prohibited by Kentucky statute and regulation, and a permit is required to possess five or fewer of these turtles, for personal keeping only. The authorities determined that Cool, between July 2019 and July 2020 sold 669 Eastern box turtles that were determined to have been taken from the wild. The U.S Attorney’s Office for the Eastern District of Kentucky said Cool sold the turtles for an average of $100 each.

“The U.S. Fish and Wildlife Service, Office of Law Enforcement, considers the illegal collection and commercialization of Eastern Box Turtles a high priority,” Stephen Clark, Special Agent in Charge, U.S. Fish and Wildlife Service said in a statement released to the media.  “We will continue to work closely with our State partners and the United States Attorney’s Office to investigate and prosecute these important cases.”

The USFWS received tips from Pennsylvania and West Virginia wildlife officers that Cool was selling and trafficking turtles in interstate commerce. Law enforcement reports indicated that Cool had in his possession more than 125 Eastern box turtles while traveling through West Virginia and he indicated to others that he was selling the turtles for $200 each to out of state buyers. Cool was subsequently arrested in McKee, Kentucky September 15, 2021. Cool pleaded guilty November 2021 to violating the Lacey Act. Cool will serve 85 percent of his prison sentence, in accordance with federal law. Upon his release, Cool will be on probation for two years and must complete 80 hours of community service.

About the Eastern Box Turtle

The Eastern box turtle is listed as vulnerable by the IUCN. It is a small turtle, averaging about 4 to 8 inches in carapace length. It is a captive-bred species, so there is no reason why they should be removed from their wild habitat. They can live more than 20 years and are a popular species among reptile keepers.