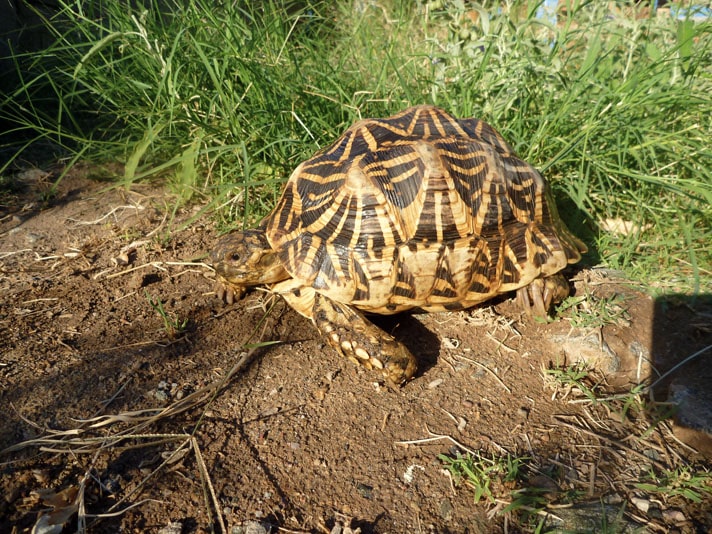 Tips for keeping one of the world’s most attractive tortoises—the Indian star tortoise.

Beauty may be in the eye of the beholder, but most will agree that the Indian star tortoise is one of the world’s most attractive tortoises. Geochelone elegans is one of several tortoise species that have radiating yellow markings on the scutes of their carapace. Other species with radiating yellow markings include radiated, tent, Burmese star and geometric tortoises, each of which is less common than the Indian star tortoise. 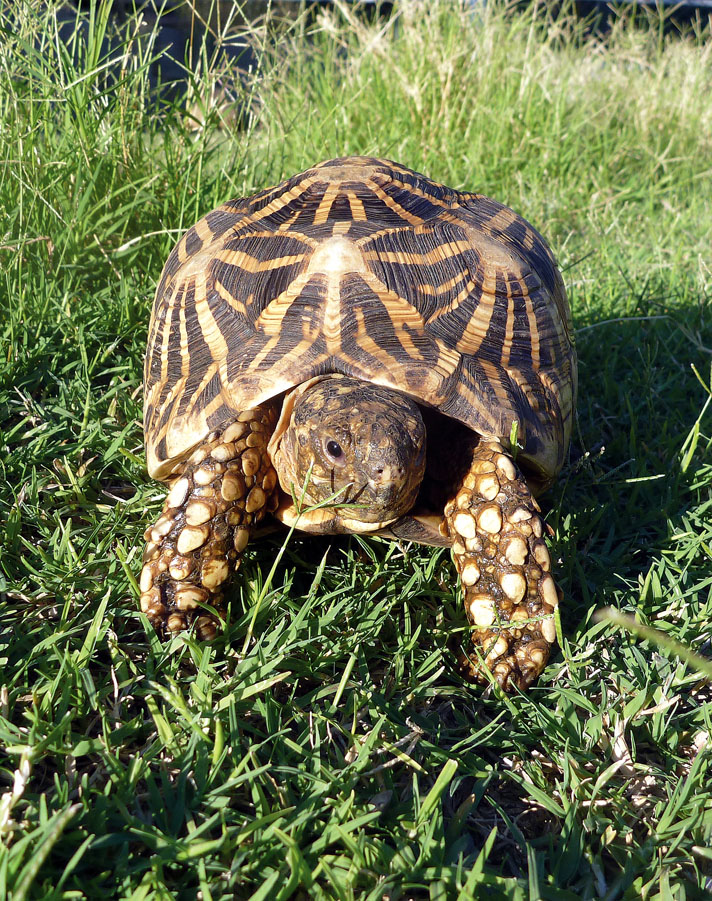 Indian star tortoises are protected throughout their natural range in India, Sri Lanka and Pakistan.

Indian star tortoises are protected throughout their natural range in India, Sri Lanka and Pakistan. In spite of this protection, large groups are often smuggled out of India and Sri Lanka, often ending up in Malaysia. It is not uncommon to see reports of large groups of star tortoises seized by customs officials at the airport in India. In spite of their protection, imports of “farmed” specimens show up in the United States periodically. Wild-caught star tortoises have generally not fared well, creating a long-standing negative reputation that Indian star tortoises don’t do well to captivity. Fortunately, enough people are now breeding them in the U.S. that captive-born specimens are generally available.

There are no recognized subspecies of G. elegans, but there are at least three geographically separate variants. Specimens from northern India and Pakistan are larger and darker than the smaller specimens, with more contrasting patterns from southern India. Sri Lankan specimens grow larger than the southern Indian specimens and may have more yellow in the radiating lines of their carapaces. In the pet trade, we generally see G. elegans listed as either the Indian or Sri Lankan star tortoise, though technically these are the same species. Sri Lankan stars are less common in the pet trade and often demand higher prices than Indian stars, but there is really no guaranteed method to distinguish the two variations as hatchlings, and even as adults, it may be difficult. 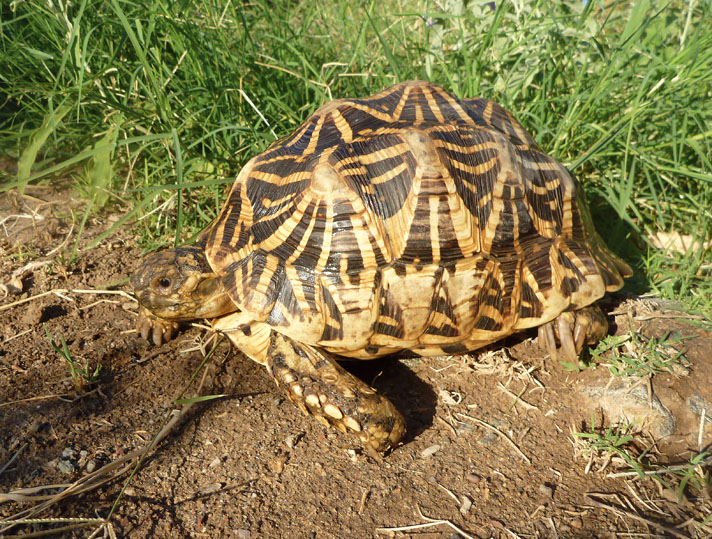 The Indian star tortoise (Geochelone elegans) is one of several tortoise species that have radiating yellow markings on the scutes of their carapace.

Star tortoises come from a wide distribution in India, where they may live in semi-desert grasslands and moist deciduous forest. They may be found on sand dunes, in scrub forests, humid jungles and in human-altered habitats. The one common factor is that in each area they experience a very dry season and a wet season. The dry season is during winter or cool periods, and the wet season happens during the warmest part of the year. These wet and dry seasons can easily be recreated in captive environments. 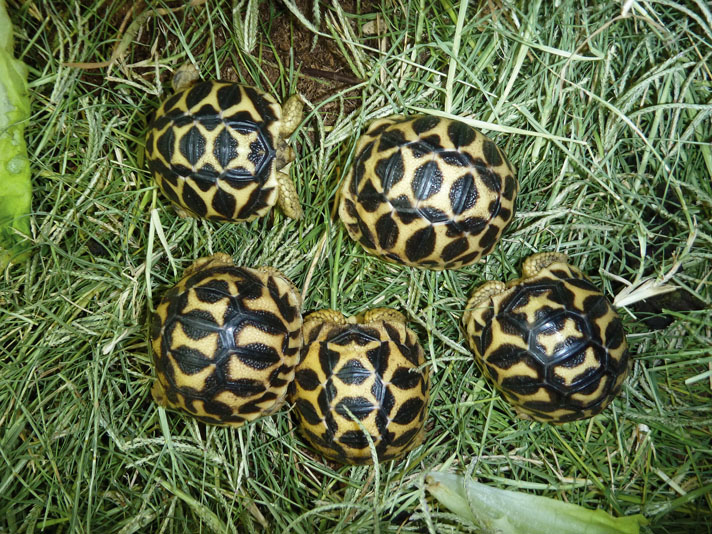 One advantage of star tortoises is that even when they grow beyond the hatchlings you see here, they can be kept in groups with multiple males and females.

In Phoenix, Ariz., I maintain a group of star tortoises outdoors year-round by providing a heated hide box during the winter. Phoenix has a natural monsoon season in August, but a sprinkler in the pen is used to artificially replicate a monsoon season or supplement rainfall if the actual level is low. I generally allow sprinklers to come on for about five to ten minutes twice per day during the months of July and August.

Indian star tortoises can be kept in groups with multiple males and females. Males don’t constantly bite and ram females the way Greek, Hermann’s, Russian or marginated tortoises will often do. Geochelone elegans also doesn’t dig burrows or fight like African spurred tortoises, and isn’t a climber or escape artist such as the pancake tortoise and many of the Mediterranean tortoises. 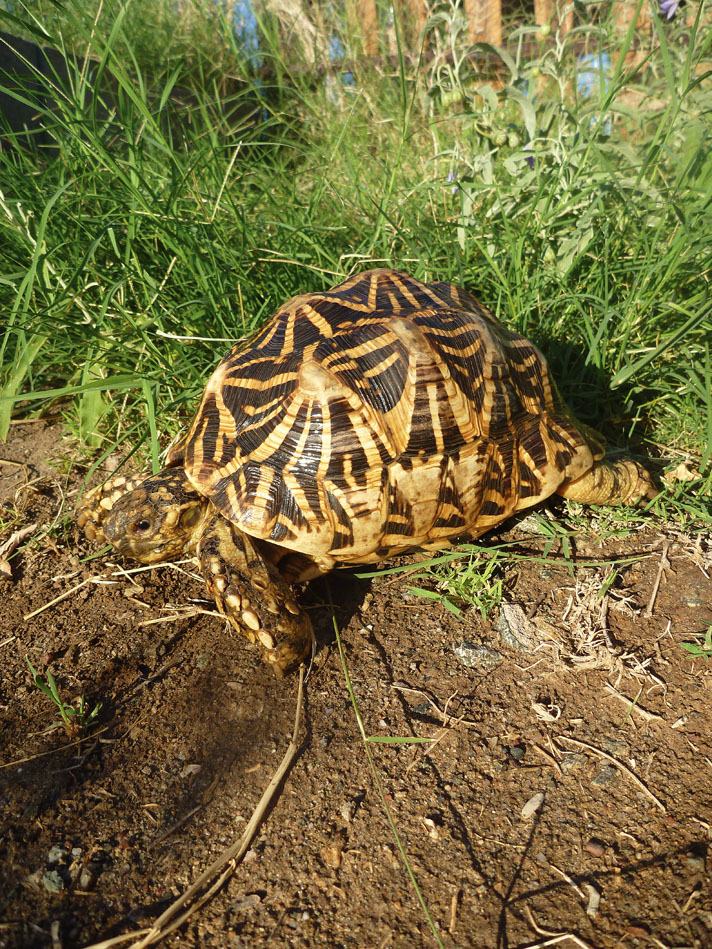 The Indian star tortoise (Geochelone elegans) is one of several tortoise species that have radiating yellow markings on the scutes of their carapace.

An adult group of two males and three females could easily be kept in an outdoor enclosure of approximately 8 feet by 8 feet. Star tortoises don’t climb or dig, so walls don’t need to be buried, but they should be at least 8 inches tall to provide a visual barrier to the outside, which will minimize pacing along the wall. My typical enclosure includes a hide box (heated when temperatures outside drop into the 50s), Bermuda grass, fountain grass and a water dish. Adult tortoises will eat low-cut grass and hide in tall Bermuda grass or under fountain grass. There are also areas of bare ground for basking and digging in order to lay eggs. The hide box is heated by a red 250-watt infrared bulb, which can be purchased from stores that sell reptile products. The infrared bulb provides a heat gradient depending on the distance a tortoise is from the bulb. While the entire heat box should maintain a temperature of at least 50 degrees Fahrenheit, warmer temperatures above 70 degrees may be achieved when the tortoise is directly beneath the bulb. Tortoises will still come out to bask on sunny days, even when outdoor temperatures are only in the 60s or low 70s.

Due to their relatively small size, Indian star tortoises can do well in indoor enclosures. Indoor enclosures should have hide areas where a tortoise can feel secure, as well as adequate heat and UVB lights. Secure areas may be hide boxes or even live fountain grass planted in the enclosure. A hide box only needs to be slightly bigger than the size of the tortoise, and it may be stuffed with grass or hay to help the tortoise feel secure.

I generally don’t provide a water dish indoors. Instead, I soak the tortoise in slightly warm water about once a week, where it will drink and often defecate. If you do provide a shallow water dish, be sure to keep it clean and change the water as often as necessary. 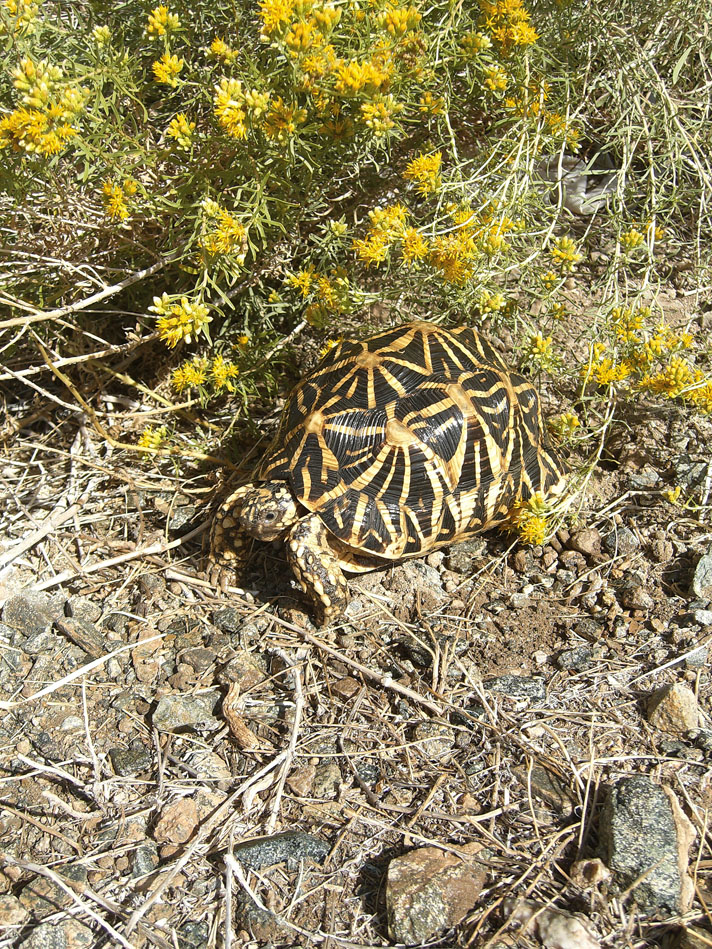 Exposure to natural sunlight or UVB light plays an important role in how Indian star tortoises absorb and utilize calcium.

The substrate in an indoor Indian star tortoise enclosure may be slightly moist dirt or peat moss covered with grass clippings. The tortoise may burrow into the dirt under the grass clippings. Place food on top of the grass clippings so the tortoise doesn’t ingest dirt while eating. The dirt substrate should be at least 6 to 8 inches deep to allow a female tortoise to dig and lay eggs. The substrate should be replaced as needed; depending on the size of the enclosure, this may only be needed once or twice a year. Moisture should regularly be added to the substrate, and it should be moist but not wet. Due to heat lights, UV lights and warm temperatures required, the substrate may dry out quickly. Light spraying each day will help maintain the moisture in the substrate. Adequate moisture is critical for a female to dig and form her nest, and if the substrate is too dry, the nest hole will not hold its shape.

An ambient temperature in the mid-80s Fahrenheit with a warm area of 90 to 95 degrees under a spotlight is optimal for indoor enclosures. A drop of 5 to 10 degrees at night is not a problem. Temperatures must be maintained at optimal levels for tortoises to digest their food properly. If they’re too cool, a tortoise will become inactive, reduce its food intake, and it may not be able to fully digest its food. If it’s too hot, a tortoise will seek shelter and become inactive. The enclosure should be maintained to allow the tortoise to thermoregulate its body temperature and have adequate exposure to UVB light.

Exposure to natural sunlight or UVB light plays an important role in how the tortoise’s body absorbs and uses calcium. Calcium is a critical nutrient, especially for growing hatchlings and egg-producing females. Calcium is used to build strong bones and plays a role in muscle and nerve functioning. UVB light or natural sunlight allows the body to produce vitamin D3, which is critical to the body’s ability to absorb and use the available calcium. Calcium interacts with other nutrients, such as vitamin D3 and phosphorus, and is regulated by the body. Too much or too little calcium will create an imbalance. If calcium is lacking in the diet, the body will pull it from another source, such as the bones. If you provide a varied diet high in calcium and provide your tortoise with access to natural sunlight or UVB light, additional supplements of calcium or vitamin D3 should not be required. 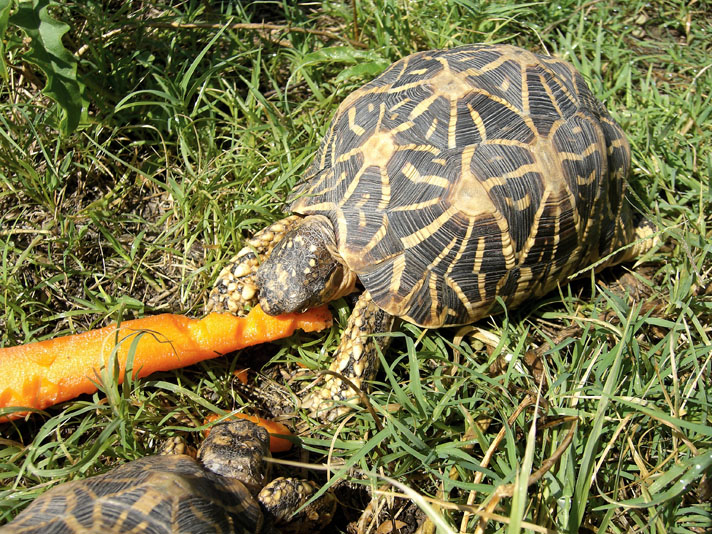 Indian star tortoises will graze and feed on a variety of grasses and vegetation. A high-fiber diet rich in calcium is required.

The tortoises in my outdoor pens have grass to graze on, which is supplemented with carrots, Opuntia cactus and greens. Vegetables high in oxalates, such as kale or spinach, can prevent calcium from being utilized properly, and fruit can cause diarrhea and dehydration. Both of these foods should be avoided.

To correct minor respiratory problems, increase the warmth of the tortoise enclosure with an additional heat source, either a heat light or heat pad.

Indian star tortoises will readily breed in captivity in either indoor or outdoor enclosures. During the warm wet season, breeding activity will increase and eggs are laid in the fall or during the winter. In my outdoor enclosures, eggs are typically laid between the months of October and February. If maintained indoors, the breeding season may vary and eggs may be laid almost any month of the year. Generally, one to four clutches of between two to six eggs will be laid annually. I had a clutch of 10 eggs, but about four eggs per clutch is typical. 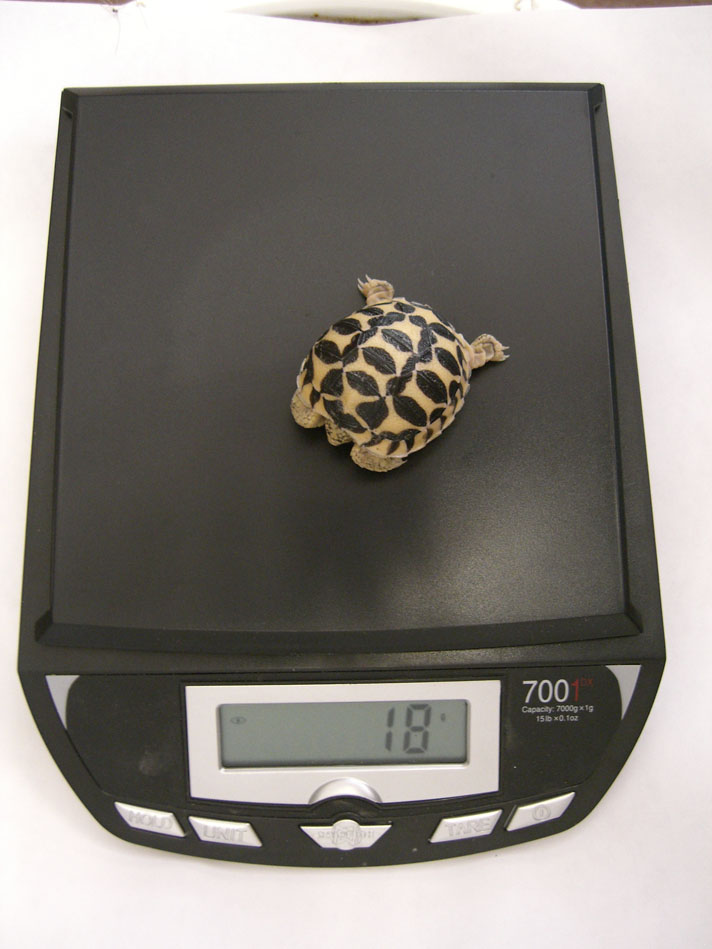 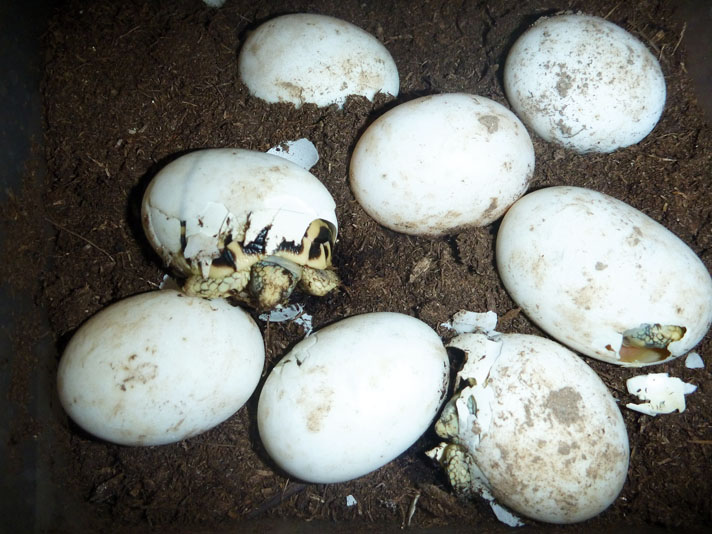 Eggs are incubated on a substrate of perlite, peat moss or a similar medium at a temperature between 80 and 89 degrees for between 100 to 180 days.

Hatchlings are maintained indoors to protect them from potential predators and to better monitor food intake until they are about 4 inches long. Diet, housing and care are similar to adults, and hatchlings can reach sexual maturity in three to five years. 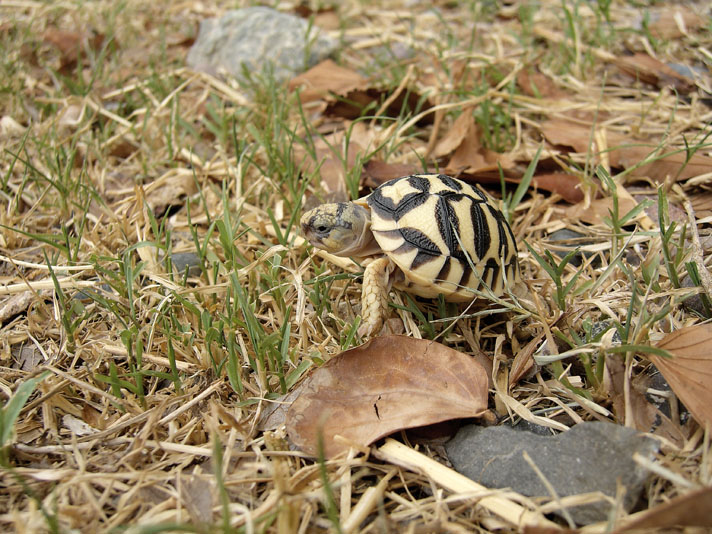 Hatchlings are small and vulnerable. If kept outside, they need to have adequate protection from the elements and predators.

As mentioned, the Indian star tortoise can be successfully kept in both indoor and outdoor enclosures. It doesn’t hibernate and is active year-round. It is a popular species due to these thing, as well as its attractive appearance, size, lack of aggression during breeding or between males, and the fact that it doesn’t dig burrows or climb. If it could handle freezing temperatures, the Indian star might be the perfect tortoise!

Jerry Fife lives in Phoenix, Ariz., where he breeds a variety of reptiles. He is one of the few private breeders of Galapagos tortoises. He also works with a number of other common and rare tortoise and lizard species. Jerry is a frequent speaker and has authored a number of articles and books. To contact him or see a list of some of his books, visit his website at  fifereptiles.com