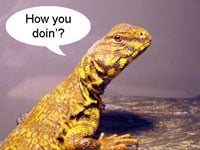 In The Beginning, There Were Toads…

The Fortress Of Solitoad
This Boa’s For You!
Toad Overload

Happy New Year and welcome to my new weekly blog! My name is Kristin and I am a huge fan of everything reptile and amphibian, from the most giant constrictors to the tiniest of toads. I’d like to take you with me as I explore the often humorous world of our less familiar and uncommon fur-free friends.

For centuries, we have enjoyed the companionship of dogs and cats, even birds, but for whatever reason have almost completely ignored the less appreciated cold-blooded pets, except to villanize them in books and films. In the beginning, there were toads… But if you are reading this blog (and even on this website to begin with) you know that this fascinating world of creatures has much to offer.

A little bit about myself — From a very young age, I was mesmerized by anything animal, but especially the more exotic pet choices that were available at the time. Instead of asking for a hamster or a goldfish I asked for frogs, toads, lizards, salamanders, even hermit crabs and assorted insects. I also caught many of them outside, although I couldn’t always bring them in the house. Fortunately, my mom encouraged my interest and actually allowed me to have many different kinds of pets. Those that were strictly forbidden, I added to my collection later, such as snakes, tarantulas and scorpions.

Which brings us to today. I currently have a small zoo in my condo. The most recent head count is 19.

I’ll start with the kitchen crew. I have a very quiet Texas toad who’s so shy that she has never eaten in front of me. In another cage, I have a Great Plains toad, affectionately called Turkey Burger, due to her large, round size and coloration.

Moving on to the dining room, is an aquarium housing two albino African clawed frogs, one of them named Quasimoto because of the hump on his back. My boyfriend jokes that they look like little boneless, skinless chicken breasts, so we sometimes refer to them as the chicken nugget twins. The next dining room dweller is my ball python, Xiaoyu, who I have had for nearly 7 years. Her name means “little girl” in Mandarin, but after this long, she is anything but little. Below her cage are the two Uromastyx lizards. One is a female Mali Uro named Yakibo, and the other is a male yellow Saharan Uro named El Guapo, meaning “the good looking one” in Spanish. (see photo) And I do believe he knows just how attractive he is. Yakibo lets him know this almost daily, flipping over on her back for him when he walks by. So, do any of us humans actually dine in the dining room? No. We leave that to the animals.

Now, moving on to the living room. Six different species reside here. In the first cage, we have Damian the Colombian red-tailed boa. He uses his luxurious mustache to attract the ladies. (see photo) Below him is Felix, my 6-year-old rose-haired tarantula. He is an aspiring interior decorator. Every year, this one-spider wrecking crew demolishes his current setup and rehabs the place into a fabulously stylish new arachno-pad. I leave the details to him. In the next cage are three more frogs including my big-eyed treefrog named Anubis, and two Cuban treefrogs. Of the bunch, Anubis is the only real talker. He yaks about the weather, what’s on TV, and what he ate for dinner. The only other time he is talking is in the middle of the night when we are trying to sleep. I told him to leave a memo instead, but he hasn’t gotten around to this yet. Moving on to the next enclosure, I call this one Gecko Land. The first two residents are both male leopard geckos, named Orion and Nova, acquired already living together in relative harmony. Can you believe it? They actually get along with only a few minor skirmishes. The third leopard gecko to be added was a female named Nebula, who compliments them both nicely. The last resident on the scene is a golden gecko named Shrubelinda. He enjoys long walks on the beach and eating banana-flavored baby food off a spoon.

And last but not least, we have the cane toads in the bedroom. The blue-eyed female is named Beefy, and then we have the king of the castle, Mr. Munchy. His name speaks for itself. His primary goal in life is to eat everything on the planet that he can fit in his mouth. The struggle continues. So far, due to confinement issues and the fact that he is not gainfully employed, he has yet to be successful.

Is my boyfriend amused by all of this? No. However, I made a compromise recently and moved my beloved Felix out of my bedroom, and I moved in the pair of cane toads in his place. This has alleviated some of the “spider stress” at bedtime. “What is that noise? Is that him escaping? Is he in the cage? Where IS he?! Did you check under your pillow?!”

I also must mention my dog Monster. He insists. He is a walking garbage disposal, who also happens to be a year and a half old Boston Terrier. Anything on the ground is fair game, including any escaped crickets or bugs, paper, leaves, rocks, or anything not bolted down or under glass. He has a stomach of steel, and may actually be a goat stuck in the body of a dog. So that he fits in with everybody else we have slapped a Dogzilla costume on him. (see photo)

So now you’ve been introduced to the numerous characters in my collection and will hopefully enjoy their adventures to come. We will be taking a toad’s-eye-view of the world, stopping to smell the crickets along the way!