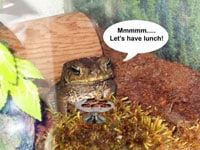 Hello again, and welcome back to my blog. Today I’d like to invite you into the world of Mr. Munchy, the hoppin’ cane toad, and how he came to be in my collection.

So where does one find a Bufo marinus you may ask? At the reptile show of course! I had already obtained his blue-eyed predecessor there a few months before, and was confident that I could find her a suitable mate. I perused the many tables, but did not see the breeder from Ohio who had brought me my first cane toad, Beefy. I moved on to other tables, stopping at one of my favorite sellers. This guy always has it all, so I knew my chances were good. I spotted the big covered plastic box at the end of the table that held between seven and 10 large toads in it. My bufo-seeking troubles were over!

Asking to see them, I grabbed the largest one, telling the guy that I was looking for a male. He took him from me and started to squeeze him, I guess to determine what sex he was. Mr. Munchy was NOT having this. He proceeded to empty his rather large bladder all over the table and floor. The seller was embarrassed and was apologizing for his bad behavior, but I wasn’t upset, I thought it was hilarious! This toad was like the Energizer Bunny. He just kept going, and going, and going… After he had finished with his impression of a water fountain, and we were both certain that he was a male (I had already determined this when he had chirped in between torrents of toad rain), I shouted, “I’ll take him!”, and it was time to select a suitable container for his transport home.

It seemed as though the breeder was running out of containers, because he tried to put Mr. Munchy into a clear plastic carryout box used for small sandwiches; the ones that open like clamshells. Almost as soon as the lid popped into place the toad sprang into action, breaking the lid clean off, jumping high into the air, carrying it on his back. At this point, I just lost it. I was laughing so hard that I had tears in my eyes. This was a very special toad. What was incredible to me and several amused onlookers, was that just one toad could wreak so much havoc. Finally recaptured and under temporary control, Mr. Munchy was placed in a stronger container for the trip home.

Once we got home he started to explore his new habitat and within 30 seconds he was zapping things with his tongue, imagining bugs everywhere. When I saw just how hungrily he was acting, I threw in a few crickets. He got to work right away, quickly chasing all of them down and munching away. And thusly, he practically named himself.

So what does Beefy think of him? She seems pleased. She could have taken an “every toad for himself” attitude, and forced him to find his own cave to sleep in, but she has shared her hollow log with him ever since. Mr. Munchy has found his place in Toadville and he and Beefy make a good toad couple – even displaying the same cream colored spots on their backs. So I would say, so far, everything is toadily cool!